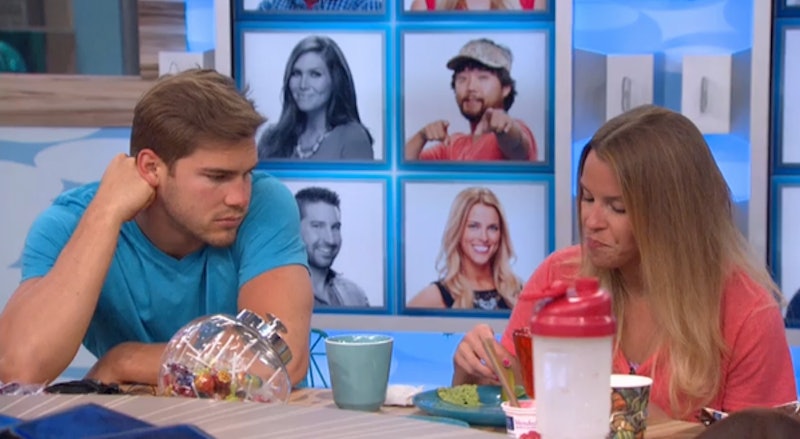 Time is running out on the showmance between Ken and Barbie aka Clay Honeycutt and Shelli Poole on Big Brother 17. And I couldn't be more excited, to be honest. For most of Season 17, Clay and Shelli's showmance has not only had them making some really silly game moves, but has also had them feeling overly smug about how secure their place in the house is. The two genuinely didn't believe that anyone would target them with The Sixth Sense alliance on their side, but James Huling swiftly proved them wrong, and, now, one of them is going home. However, Shelli and Clay's showmance has been a slow burn, to the point that, despite all the cuddling and flirting and forehead kisses, the two still have yet to make out. The question on everyone's minds is will Shelli and Clay kiss before eviction? Spoiler alert. The answer, I am happy to report, is yes.

Clelli fans everywhere can at least rejoice about that, even though I sincerely hope there isn't anyone out there who thinks their relationship will last outside of the house. Showmances rarely do. Not everyone can be, like, Hayden Voss and Nicole Franzel. And there are already whispers that the next girl Clay will flirt up a storm with if and when Shelli goes home is actually dear not-Taylor Swift, better known as Meg. But those who wanted to see all of Clelli's unresolved sexual tension finally get resolved, sort of, can happily note that Clay and Shelli finally kissed on the live feeds. And then things got hilarious.

Yes, that's right. The two started macking on each other in the backyard in front of the entire world. What have they got to lose? James didn't use the Power of Veto, instead electing to keep the nominations the same, and that means one of everybody's (least) favorite couple is definitely going home. It was fine to flirt and dance around each other when they had all the time in the world, but now their time is up. Why not make out all over the house? Heck, maybe they'll join the ranks of house guests to attempt to discreetly have sex in the Big Brother house. (Pro tip: it is never as discreet as you think it is, house guests, even if you do it solo.) The world is their oyster, at least until eviction night.

However, the hilarity comes in when Clay and Shelli were rapidly c*ckblocked by Liz and Julia. Their own alliance members chose that particular moment to come outside and have a seat because... why not? Clay and Shelli immediately stopped kissing like the world was going to end, and, though the camera doesn't exactly show it, I imagine they were giving the twins the stink eye as if they could compel them to leave by sheer force of will. Perfect moment is perfect, and, if CBS doesn't broadcast it on TV, I am going to be really sad because I'm still laughing about it.

At the end of the day, Clelli was nice while they lasted, but being in a showmance puts a huge target on your back even if you don't blatantly bargain for the safety of yourself and your showmance partner in front of the other house (and in front of your other alliance members). Someone was going to go after Team Clelli eventually, for being the only alliance that were truly loyal to one another above all, and it's about time. Now, excuse me while I play Taylor Swift's "Last Kiss" for them.

More like this
'Big Brother' Is Already Looking For New Houseguests To Compete In Season 25
By Brad Witter
Clayton & Susie Broke Up, Citing "A Significant Amount Of Pain" After 'The Bachelor'
By Jordyn Tilchen
‘The Ultimatum: Queer Love’ Is Officially On The Way
By Radhika Menon and Kadin Burnett
Kendall Jenner Thinks Tristan Thompson "Wanted To Trap" Khloé With Another Baby
By Jake Viswanath
Get Even More From Bustle — Sign Up For The Newsletter