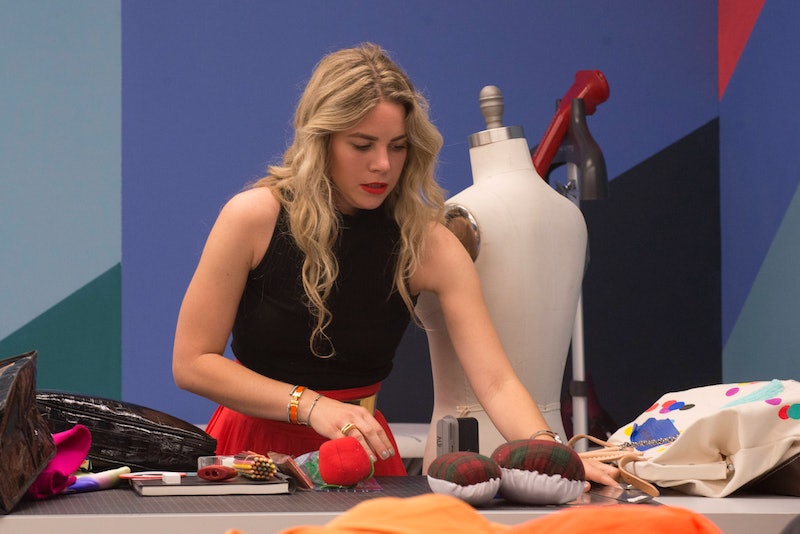 Project Runway has always been a show full of emotional ups and downs — it's the show's bread and butter. Just when you think your favorite contestant is out for good, they come back, either because someone else had to drop out for some reason, the judges enacted some kind of twist, Tim Gunn used his patented Tim Gunn Save, or the designer just went home, licked his or her wounds, and came back with a killer portfolio and tried out for the next season. Last year, Amanda Valentine — a Season 11 designer — came back and nearly won Season 13. (She was the first runner-up.) So, is Project Runway bringing back any previous designers for Season 14?

The answer is yes and no. Another Amanda is making her second run at the runway — but you probably don't remember her. Amanda Perna hails from Season 9, a year where the judges pulled an especially cruel trick on the contestants: 20 designers were called in for the first episode — and four were eliminated immediately and didn't become of the 16 official participants of the show. Perna, a Florida native, was one of the four who were cut. I can't imagine making it all the way through casting, getting to the studio, and then being told that you weren't going to compete. It didn't seem to phase Perna, though, since she's back for another try. I hope she at least makes it to the first challenge this time. Here are some other reasons to root for her.

Who in life has never wanted a do-over? I love seeing someone try something, fail, try again, and win.

2. Her Clothes Are Cute

Her clothing line, The House of Perna, has the fun, beachy, colorful vibe you'd expect from a Floridian designer. She makes the clothes you want to pack and bring with you on your next island vacation. (They're the kind you'll be dreaming of in the not-too-distant future when we're all pulling out our sweaters again.)

Clearly, the worst person on any reality competition is the one who comes on and says, "I'm not here to make friends." No one is. Everyone is there to win. But, there are good ways and bad ways to be a winner. The best winners still support their fellow competitors — they want to win because their best was truly the best, not because someone else had a bad day — and Perna seems like she's that kind of competitor. As her Instagram bio says, "I live for positive energy and shiny objects."

Bosses that acknowledge their teams are the best. And, working with a team means that Perna may have a leg-up when it comes to some of those Project Runway pair challenges.

5. She Lives for Fashion

I think this shirt says it all.

6. This Is Her Puppy

His name is Bruno. Do you think he'd make a good friend for Mood's Swatch? We'll see if they can engineer a Project Runway doggy crossover.

More like this
This Pre-'Love Island' Video Of Olivia & Zara Together Changes Everything
By Bustle UK
Madison From 'The Bachelor' Chronicled Her Life As A "Sister-Mom" On Social Media
By Grace Wehniainen
'Bachelorette' Vet Clare Crawley Revealed Her Stunning Wedding Photos
By Stephanie Topacio Long
Rachel Responded To 'Bachelor' Fan Theories About Her TikTok With Clayton
By Grace Wehniainen
Get Even More From Bustle — Sign Up For The Newsletter
From hair trends to relationship advice, our daily newsletter has everything you need to sound like a person who’s on TikTok, even if you aren’t.