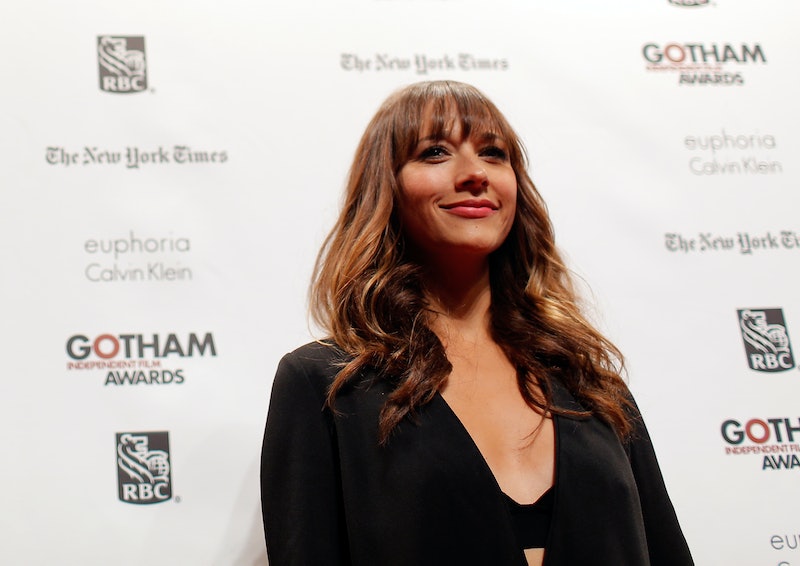 A couple months ago, Rashida Jones wrote the following tweet: "This week's celeb news takeaway: she who comes closest to showing the actual inside of her vagina is most popular. #stopactinglikewhores." Now to me, that tweet has about everything you could ask for from the 140 word format: It's funny, it's accurate commentary on the current state of pop culture, and it has an appropriate yet comical hashtag. A lot of people didn't see it this way and Jones had to quickly start defending herself when fellow tweeters accused her of slut-shaming and said they were disappointed in the actress (not angry, disappointed).

But what did she even do wrong? I'm sure many of us — at least the 2,187 that retweeted it — have no issue with Jones' statement, but in case you need further explanation, Jones has penned a new article for Glamour , "Why Is Everyone Getting Naked?"

It's a good question and Jones does a great job explaining how she sees the issue. The article focuses on pop stars, who she says have become "homogenous."

Every star interprets "sexy" the same way: lots of skin, lots of licking of teeth, lots of bending over. I find this oddly...boring. Can't I just like a song without having to take an ultrasound tour of some pop star's privates?

Jones insists that she's not a prude and definitely not anti-sex. The problem here isn't that pop stars are expressing their sexuality, it's that they are doing it in a way that comes off more like selling sex, seeing as it's all done exactly the same way, and that many don't seem to take into account that they're role models. It was Jones' view here that I found particularly significant. She says, in response to those who called her a slut-shamer, "There is a difference, a key one, between "shaming" and "holding someone accountable."

This is about being able to have an opinion, an opinion Jones sees as "holding someone accountable," without being told you're shaming or offending someone. Why is it that now whenever a woman voices her opinion on another woman's sexual-related behavior it seems to automatically be termed slut-shaming? Another example of this is when earlier this year model Chrissy Teigen tweeted the following:

"Farrah Abraham now thinks she's pregnant from her sex tape. In other news you're a whore and everyone hates you."

Granted Teigen's tweet is a bit (or maybe a couple bits) more harsh-sounding than Jones', but what they have in common is that both were immediately accused of being slut-shamers as if that overrode their right to have an opinion on public pop culture matters. The always vocal Teigen did not hold back on defending herself, saying, "Does calling this 'slut shaming' make you feel better? Like pulling the bully card? Ladies: you aren't a super feminist for okaying super whores."

Jones' article shows that she has a really good grasp on this and she expands on it extremely well. She's upfront about the fact that certain pop singers should stop denying that they're role models because they are, like it or not, and she even has some reasonable advice for them.

Go ahead and make videos in which your ass cheeks slap water around in slow motion; go ahead and tweet pictures of your undercarriage. But perhaps every eleventh song or video, do something with some more clothes on? Maybe even a song that empowers women to feel good about some other great quality we have?

She ends the article by joking about how the real point of her writing was to promote her new single which "will be literally dropping out of my butt. Live at the Video Music Awards." Like the tweet that started this all, it's an on point commentary on entertainment today and, equally as important, it's hilarious! Judging the state of the world through comedy is necessary. Here's hoping this doesn't cease due to an obsession with the idea of shaming.