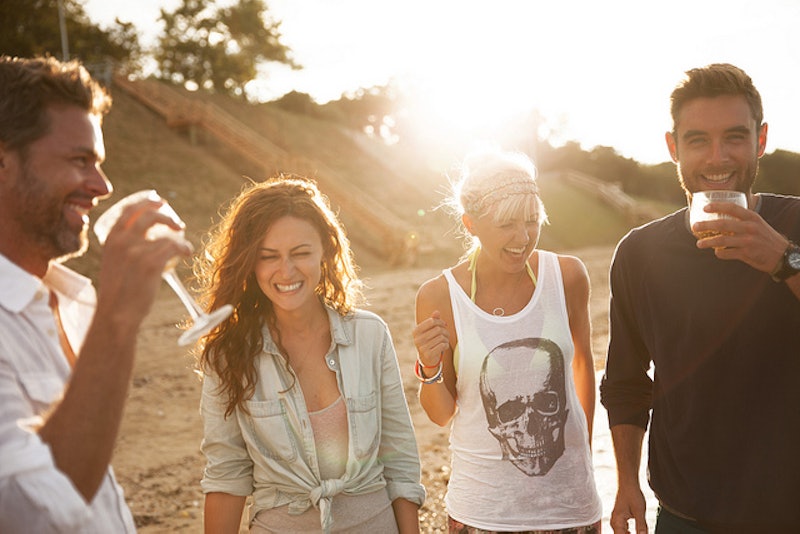 Be honest: Have you ever sat at a bar with a bunch of people around you, opened up Tinder or another dating app, and started swiping left and right in response to pictures of people nowhere near you? A lot of us have forgotten how to meet people offline. Dating apps have accustomed us to looking at someone and knowing if they're single, whether we have mutual friends, and whether they like us back, so it's no wonder approaching someone when we know none of this information seems risky. Compared to hiding behind the certainty and relative anonymity of Tinder or OkCupid, it is. It's also harder to tell if you'll get along with someone when you don't have access to their answers to hundreds of survey questions. Meeting online has its perks.

However, meeting in person has its perks, too. It's more spontaneous, and even if the meeting doesn't lead to anything, you get either a good conversation or a funny story (even if it's funny in a horrifying way) out of it. Plus, you skip all the virtual small talk leading up to a meeting, and if you end up dating, you have a better how-we-met story than the typical "we met online."

If you're thinking, "That all sounds well and good, but, I prithee, how?" I'm sorry to tell you there's no foolproof formula, but here are a few methods I've seen work for me and other people in the past.

As the movies make clear, this method can get a little dicey if you're looking for more than a casual hookup, but it has produced dates before. And even if you and the patron next to you are looking for something different, there's potential for a fun conversation. Plus, one person who is definitely not there for a casual hookup is the bartender. This strategy works best if you go with a single friend or two, as long as you're not huddled in your own little corner of the bar.

Also, keep an open mind because you may find more than dates or hookups. As part of an odd story I love to tell, I met one of my best friends at a bar. Two guys came in together and somehow decided they'd each go after one of us, and neither of us was feeling it. We ended up exchanging numbers and texting to complain about their unwanted advances, then we texted well into the next day, and now we're friends almost two years later!

I mean this both in the literal sense of Meetup.com and in the general sense of any organized group activity for people with common interests. Meetups can be unpredictable, with some really networking events in disguise and some really singles events in disguise, but again, no matter what, there's always the potential to make friends. Meetups also present the opportunity to take part in activities you wouldn't otherwise have companions to enjoy with, like hackathons, drum circles, game nights, or group runs. If the event is explicitly for networking, however, a word of caution: Nobody likes that sleazebag who attends the local marketing society's cocktail party to market themselves to potential dates.

A lot of local "sports" (loosely defined) leagues are more social than competitive. I've never joined one myself, but I've heard stories of people drinking margaritas throughout kickball games, hitting the food court together after bowling, and getting into all sorts of relationship entanglements and drama. I guess sports really do bring people together.

Not all bars with trivia nights require you to come with a group, and some even pair up people who enter alone. Even if you don't meet someone who sparks your interest, you'll probably gain knowledge about an obscure topic. I was once paired up with an archivist at the Metropolitan Museum of Art during art history night, which drastically improved my score ("drastically" meaning "from a baseline of zero").

If you're not subtle, getting someone's attention on public transportation can backfire — especially in a packed city like New York, where subway riders have a certain paranoia about them. So first, try making eye contact and see if they look back. Then, you can mention something you've noticed about them (are they reading a good book? Wearing cool shoes?). Or, if the thought of that sends shivers down your spine, try asking something related to the train or bus or gondola or whatever you're taking. As long as you don't end up failing math as a result like Cady in Mean Girls, I give you permission to pretend you don't know something. Anything for love, right?

Oh, and here's another idea based on personal experience. I'm not sure what possessed me, let alone what would possess you to do this, but since it's a good story, I'll throw it out there: While I was on a train (on the way to meet someone else I was casually dating, but that's another story), I caught someone checking me out. In a move I believe I first witnessed in a play, I wrote my number on a piece of paper with the note "want to sit with me?" and "dropped" it on his seat on the way to the bathroom. When I got back, he took the seat next to me. It became clear very quickly that we had nothing to talk about, but think of what a great story that would have been to tell our grandchildren.

If 27 Dresses is any indication, people can really bond over a mutual favorite song, especially when they have to sing it on stage in front of a bunch of strangers (sorry, don't mean to scare you). The activity provides endless conversation starters: "What will you be singing?" "You did a good job." "Do you know this song?" It also provides endless opportunities to dance if you're with the right crowd.

Before you go testing out these tactics, let me forewarn you that they only work with the right attitude. First of all, you have to be bold enough to accept that someone may very well respond to your flirtatious "hey" with "I have a girlfriend," "I'm not interested," or "I don't know English" (it's happened). You also need an open mind. Chances are, you won't get a date every time you try. But if you commit yourself to having fun even if you don't, you'll be wasting far less time than you'd waste scrolling through OkCupid profiles.