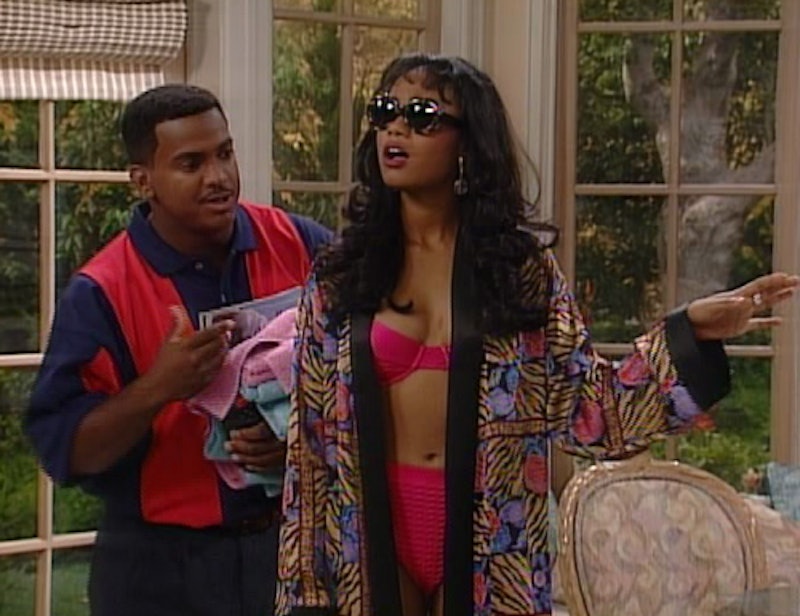 As much as The Fresh Prince of Bel-Air was about Will Smith's journey from childhood to adulthood, it was also about the female characters on the show. Though Will's relationship with his cousin Carlton was a major component of Fresh Prince, Will also had really strong relationships with his cousins Hilary and Ashley. The Banks sisters were fully fleshed out characters who got Will to think beyond his often one-dimensional ideals. While the eldest Banks child Hilary obsessed about fashion and status until finding her passion as a talk-show host, her younger sister Ashley struggled to grow up in a household where her father, brother, and cousin treated her like a baby. With these ladies, and more, there were plenty of girl power Fresh Prince moments that make the series worth re-watching over and over again.

A major part of Will's journey into adulthood was learning to treat women respectfully. Though he was always fiercely protective of Ashley as her interest in the opposite sex grew, it took him some time to see how his outlandish one-liners and constant come-ons were affecting not only the women he went after, but also his little cousin's perception of men. Likewise, Will constantly squabbled with Hilary, but, in the end, they respected and learned a lot from one another.

The ladies of The Fresh Prince of Bel-Air had some amazing moments on the show, from Aunt Viv attacking ageism to their frank discussions about sexism. Here are nine best girl power moments from Fresh Prince, so prepare to be inspired all over again.

1. Will's Date Calling Him Out For Body Shaming

In the second season of the series, Will meets a really cool girl named Dee Dee, played by Queen Latifah. Though the duo have a fantastic time together, Will refuses to ask her on a date because she is curvier than he's used to. Not only does Dee Dee call him out for body shaming, but she also shows up to the school dance with another man on her arm.

During the second season of Fresh Prince, Aunt Viv feels a bit uncertain about turning 40 years old. Instead of continuing to worry, she attends a dance class with a ton of younger women, and outdances them all. She proved time and time again that ageism is ridiculous.

Despite her her somewhat superficial ideals, Hilary always thought for herself. She dropped out of college when she decided it wasn't the path she wanted to go down, and she jumped from job to job until she found the best fit for her. In the fourth season, Hilary is invited to pose for Playboy. Though Uncle Phil, Carlton, and Will are horrified, Hilary goes through with it because it's her body, and she is a grown woman who can make her own decisions.

4. Ashley Calls Will Out For His Double Standards

It's not a secret to any fan of Fresh Prince that Will had some terrible habits when it came to pursuing women. This was not at all lost on his cousin Ashley, who Will had an extremely close relationship with over the years. In the fourth season of the series, Ashley asks Will to chaperon her date, thinking he'd be a better fit than Uncle Phil. Unfortunately, Will acts just as smothering and overbearing as Uncle Phil would have. Not only does Ashley call him out on his double standards, but Will's date even leaves him after he can't remember her name.

5. Lisa Gets Will Back For His Treatment of Women

Frustrated with his objectification of women, Carlton sets Will up with Lisa, whose sorority plays a series of pranks on him to get him to see the error of his ways. Though Will is initially horrified, he and Lisa eventually enter into a relationship and get engaged.

6. Lisa Defends Will Against An Attacker

While on a date at a bowling alley, Lisa and Will are threatened by a man who is interested in Lisa. Though the man knocks Will unconscious, Lisa is able to defend both of them using martial arts.

After overhearing Ashley's plans to have sex with her boyfriend, Carlton and Will are distraught, and they end up humiliating her. Ashley turns to her older sister Hilary, who tells her that she should have sex whenever she is ready. Hilary basically gave the best advice ever.

Will meets his match when his home girl Jackie moves to Bel-Air from Philadelphia. Played by Tyra Banks, Jackie is witty and extremely smart, giving Will a run for his money.

9. Ashley Stands Up To Uncle Phil

After years of private school, Ashley decides that she wants to attend public school for a different experience. Uncle Phil is initially horrified, but Ashley stands her ground, and she is eventually allowed to stay in her new school. This wouldn't be the last time Ashley had to stand up to her overbearing, yet well-meaning, father, but she always fought for what she believed in.

The ladies of Fresh Prince weren't just there to witness Will's journey to manhood. They also had stories and journeys of their own that made them inspirations.