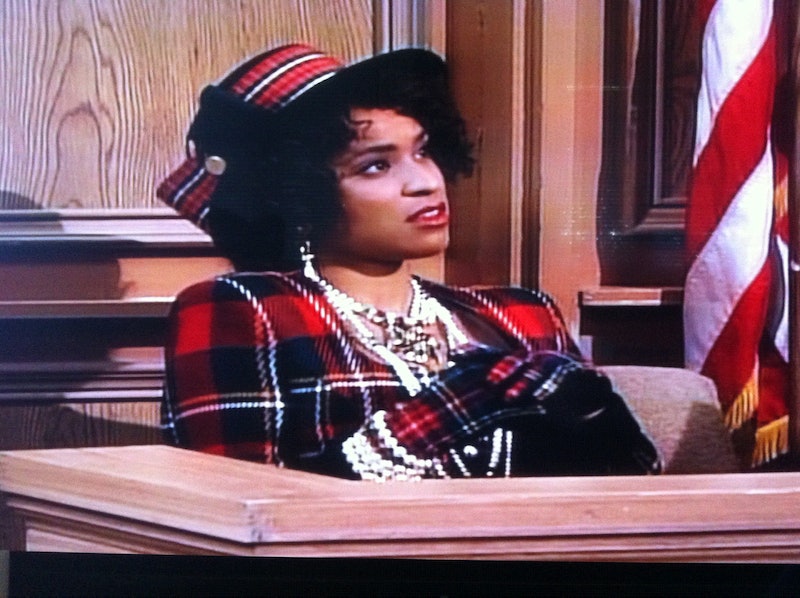 The Fresh Prince of Bel-Air was one of my all time favorite sitcoms. It contained Will Smith, witty banter, and, of course, outrageous Hilary Banks fashion. Hilary was probably my favorite character on the show — she was just hilarious, what with being a spoiled brat who enjoyed nothing more than spending her father's well earned money and berating her brother, Carlton, and cousin Will.

Hilary could also be a little selfish; upon hearing the news that her mother was pregnant, instead of being happy for her mom, she spends the time imagining the baby growing up and acting like her own personal assistant. However, Hilary usually got along well with her little sister Ashley and obviously her parents, too, as they held the key to her happiness: money.

Hilary is a total daddy's girl and has Philip Banks wrapped tightly around her little finger. At the beginning of the series, she is introduced to Will and promptly repeats to her father that she needs $300. When questioned for what purpose, she replies succinctly, "I need a new hat," as she drops a mountain of bags from her recent shopping spree onto the floor. Although spoiled rotten, she does have some priceless, fashion-orientated one-liners such as, "What dog did he steal that sweater from?" and, "I haven't been this happy since I bought my Giorgio Armani suit."

In fact, I would argue that Hilary was as fashion savvy as Cher Horowitz. The two share more similarities: They love designer clothes, they enjoy flashing their dad's cash, and delight in going out with boys their parent(s) don't approve of. However, Miss Banks had a mean streak. Hilary was the original Mean Girl and she would have wiped the floor with Regina George. So to honor this clueless, mean fashion queen, let's take a look back at Hilary's most OTT fashion moments.

This outfit brings to mind the motto of Marmite: I don't know whether I love it or hate it. The floppy hat and beads give this outfit strong Daisy Buchanan vibes, but the dress looks a little too big and makes it appear as though Hilary has borrowed it from her grandma's wardrobe. I can't decide whether this ensemble is fabulous or a flop. Maybe it's both: A fabulous flop.

In an episode where Hilary is on TV, she is seen wearing a blue and pink ensemble that reminds me of the Jack Wills color scheme. Although she looks like she might burst into song at any minute, with the other members of a female barbershop quartet leaping out from behind the furniture, she still looks rather stylish. I'm a bit of a sucker for a nautical stripe and this navy, striped blazer is definitely giving me a feel of sailor chic. Plus, pink is really hot right now, as it has been deemed one of autumn/winter 2015's trendiest colors.

Here Hilary is looking rad in plaid, and IMO, this outfit totally triumphs over the Clueless girls' classic plaid attire. Miss Banks is not afraid to be bold so she's picked a striking red shade, rather than the monochrome and pastel hues synonymous with Clueless. Plus, she appears to be absolutely covered in this traditional material, including her hat and gloves, proving she'd make a fabulous Vivienne Westwood model.

4. The Sanderson Sisters Versus A Pirate Queen

This ensemble is very unusual. It looks like Hilary stole the shirt and boots from Gwen Stefani's "Rich Girl" pirate queen wardrobe and the waistcoat and skirt from the Sanderson Sisters. Plus, there's a sprinkling of librarian in there somewhere; possibly the white shirt and pearls combo.

There is a lot going on in this outfit and it kinda' makes me feel a little dizzy if I look at it too long. Personally, I like the separate components; the mustard hat, the '80s style bright jacket, and the gold jewelry. But together I think it looks as if she's wearing a clown's hand-me-downs. Sorry, Hil.

7. The Grown Up Sandy

I am loving Hilary in this decadent LBD and all black ensemble. The sheer material on her arms and shoulders takes this off the shoulder dress from plain to luxe. Plus, this dress looks like something a grown up Sandy from Grease would wear and I'm all over that.