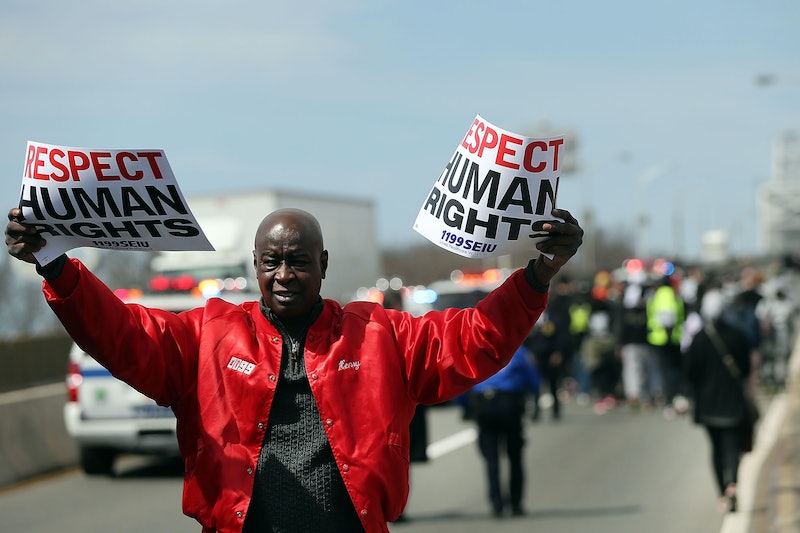 A new study released just days before the one-year anniversary of Michael Brown's shooting in Ferguson, Missouri, found that more than half of black people felt police treated them unfairly because of their race, according to the Associated Press. About three out of five black people in the United States also said they or a family member had personal experience being mistreated by police with race as the suspected motivating factor, according to the study, which was conducted by the Associated Press-NORC Center for Public Affairs Research. Even if you give some of the officers the benefit of the doubt, the numbers show that racism in law enforcement isn't an isolated incident and it sweepingly felt by the black community.

But the study wasn't about what white people though of racialized violence by law enforcement. It was about what black people have experienced in contrast to what white people experience. The study also found 71 percent of black people thought police were treated too leniently by the criminal justice system when they hurt or killed people, compared to just a third of the white population who said police were getting away too easily. Nearly half of white people, 46 percent, said police were treated fairly by the criminal justice system.

The responses were also strikingly opposite when people were asked whether race had anything to do with how police in their communities decided to use deadly force: 74 percent of white people said no, race has nothing to do with the decision, while 71 percent of black people said police would be more likely to use deadly force against black people.

Despite heightened awareness of racialized police violence, a Gallup poll released Monday found that, in 2015, black people expressed virtually the same opinions about being mistreated by police as they did in 2013. Larry Washington, of Merrillville, Indiana, expressed that same idea to the AP, that things haven't gotten any better or worse, but that more people are just aware of what black people deal with.

Some police officers, like David A. Clarke Jr., the sheriff of Milwaukee County, Wisconsin, still attributed the violence to high-crime urban areas, according to the AP.

If you have more interaction with the police because of the crime and the disorder in our urban centers — the American ghetto I like to say it — it's going to skew the numbers.

This logic sounds eerily similar to the racially-charged phrasing that Darren Wilson, the police officer who shot Michael Brown, used to describe children in high-crime, mostly black neighborhoods in Missouri, according to The New Yorker:

They ran all over the mom. They didn't respect her, so why would they respect me? They're so wrapped up in a different culture than — what I'm trying to say is, the right culture, the better one to pick from.

When pressed, Wilson elaborated and said this culture was a "pre-gang culture, where you are just running in the streets — not worried about working in the morning." Regardless, this study shows the difference between perceptions of race and police brutality between black and white people, and how race potentially affects police officers' views of the community. The fact that the differences are so great across racial lines should be disturbing and should only reinforce movements against racial targeting and excessive use of force by law enforcement.