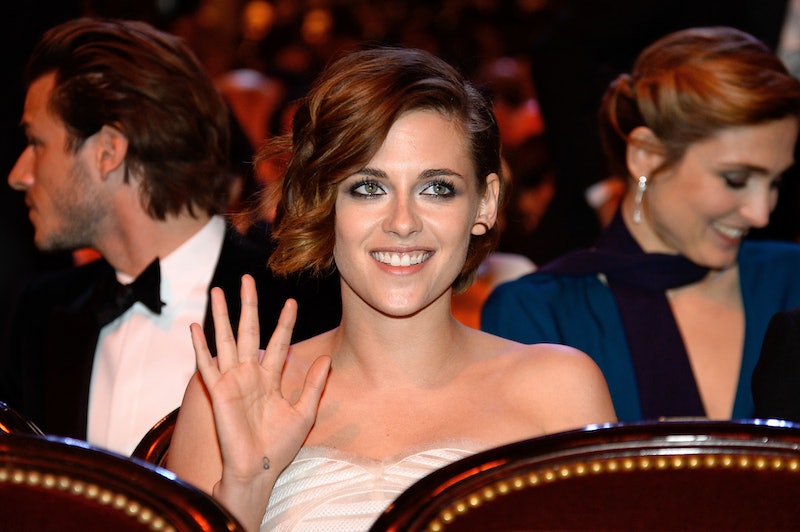 It's not really news that most Hollywood actresses are asked sexist questions. From "Who are you wearing?" to "Who are you dating?" to "Why did you cut your hair?" there are many questions we watch, hear, or read interviewers asking female celebrities over and over again. So, when the tables are turned, it can make for a nice change of pace and a great teaching moment that shows what women celebrities experience daily. For example, as part of a Funny or Die bit, Kristen Stewart asked Jesse Eisenberg sexist questions as a way to not only promote their film American Ultra, but to demonstrate that a lot of interviews go down very differently for women as compared to men.

As you can watch below, the interview starts out somewhat smoothly, but immediately Eisenberg begins to question why he is asking Stewart questions that should be for him. He says, "I think they may have switched our cards." Then, K. Stew responds, "I do get these questions a lot." Eisenberg agrees to play along, because that's only "fair." (FYI, his favorite designer is Levi's.)

Stewart continues to ask her co-star questions about his dating life, his nails (yes, a mani-cam, like the one E! uses on the red carpet, is even brought out for the actor to model his hand), and whether he's pregnant. He becomes confused and even upset at the questions. Stewart asks, "Is this not how [interviews] usually go for you?" To which he replies, that he's usually asked if he was the Class Clown.

The interview comes to a point where Eisenberg feels like the questions are "inappropriate" and "personal," mainly because nothing Stewart asks is related to the movie. Bingo! Right on the money, Eisenberg! He hit the nail on the head when it comes to how women sometimes feel during an interview. They are asked so many personal and other unrelated questions that it turns into a chat about how they look, rather than their hard work.

Thanks to this joke put on by Funny or Die, you can see how women celebrities are treated versus men during interviews. It's pretty eye-opening, and I think Eisenberg agrees. He says at the end of the interview, "Now I know what it's like to be a woman."

More like this
Twitter Is At Odds Over Taylor Swift’s Possible ‘All Too Well’ Oscar Run
By Brad Witter
Revisit 1992’s 'A League Of Their Own Cast' Photos After The New TV Series
By Grace Wehniainen
What Is Ben Affleck's Net Worth? At 50, The Oscar Winner Makes 8 Figures Per Film
By Meg Walters
Amanda Seyfried Says She Felt Pressured To Shoot Nude Scenes At 19 Years Old
By Jake Viswanath
Get Even More From Bustle — Sign Up For The Newsletter