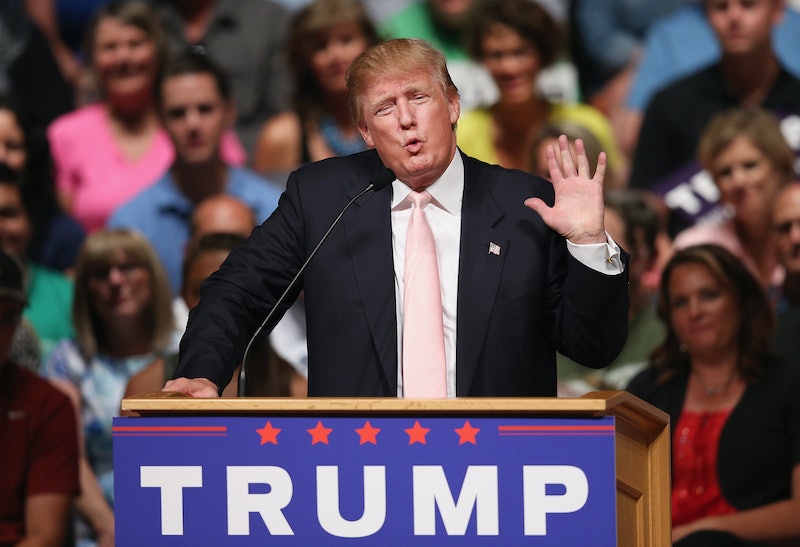 With the first debate of the 2016 GOP presidential primary looming, 10 candidates will set out to, among other things, defend their conservative credentials on women’s rights and healthcare. But just which kinds of women voters are Republicans appealing to with their policies on reproductive health, equal pay, birth control access, etc.? Across the board on women’s rights, the majority of the GOP candidates are engaged in a clear race to the bottom.

It is no secret that the Republican Party has a woman problem. In 2012, presidential candidate and former Massachusetts Gov. Mitt Romney (R) lost the female vote by a whopping 12 points. After President Obama’s surprisingly easy reelection campaign, conservative strategists set about diagnosing how the party had gone so wrong, and appealing to women proved to be one of their key shortfalls.

Yet, to hear the policy positions of the GOP presidential candidates in the ring so far, it is hard to see how Republicans are making much of an effort to reach out to the female electorate. (Women made up 53 percent of the country’s electorate during the 2012 election, for the record.) From opposing abortions of all stripes to rejecting equal pay legislation, Republican presidential hopefuls seem determined to scare women voters away long before 2016 rolls around.

And women clearly have invested interests in political issues outside of abortion rights or equal pay. As MSNBC’s Meredith Clark notes, the majority of low-wage workers in the U.S. are women, so pushing to raise the minimum wage is a women’s issue. Expanding Medicaid under the Affordable Care Act helps low-income families provide healthcare for their mothers and children. Stricter gun control laws protect children, family members, and friends. These, too, are all women’s issues.

Here is a list of the 10 GOP presidential candidates, ranked from best to worst on women’s issues:

Bush by no means has a great record on women’s issues, but all I can say is that worse is still to come. He made headlines on Tuesday when he told a group of religious conservatives that he didn’t see why the federal government needed to spend $500 million on women’s health, drawing condemnation from his presidential rival, former Secretary of State Hillary Clinton. Bush later walked back his comments, claiming that he misspoke. But Bush is a strong pro-lifer who supports a controversial ban on abortions after the 20-week mark. When he was governor, he once tried to appoint a legal guardian for the unborn fetus of a disabled woman who was raped in a state facility. In the past, Bush has also made derogatory comments about single mothers.

Paul isn’t opposed to birth control, but he is strongly pro-life. He introduced a bill in 2013 that would have protected the rights of fertilized eggs under the 14th Amendment. Other strong marks against him include his vote against the Paycheck Fairness Act in 2012, which would have made it easier for women to oppose pay discrimination, and his vote against the renewal of the Violence Against Women Act in 2013. (The Kentucky senator derided the wage gap fix as akin to the communist state’s system of centralized planning.)

Christie advocates for birth control, though his defense of contraception seemed more about jiving his own sexual practices with his Catholic faith than about women’s autonomy and family planning. He supports the 20-week ban on abortions, but would allow exceptions for cases of rape and incest. (Sadly enough, that is a moderate position in this crowd.) New Jersey activists have protested Christie for cutting $7.5 million from Planned Parenthood in 2010 and then vetoing lawmakers’ attempts to restore funding three times after that. That money once supported 58 clinics for women’s reproductive and sexual health statewide. Not to mention that he also refused to support a minimum wage increase to $8.50 that would have benefited low-wage workers, the majority of whom are women. And when asked about a pharmaceutical company’s research into a "Viagra pill for women," Christie worried that such a wonder drug would create more “dykes,” since men already have problems satisfying women’s sexual needs. Uh …what?

Carson doesn’t have particularly great views on women. Oddly enough, he blamed the protests in Ferguson on the women’s liberation movement from the 1960s and the ways in which it supposedly created a “Me generation.” (Yes, because deciding to build a life outside of the domestic sphere is turning everything into a selfish question of me, me, me.) But he has also not been in a position of political authority to create policy or pass laws, which means it is hard to tell what he would do on a number of these fronts. But rest assured that he is strongly pro-life, and he might not be fully convinced that women struggle with domestic violence.

Cruz is aggressively anti-abortion. In a post about Roe v. Wade on his Facebook page, Cruz wrote, "No right is more precious and fundamental than the right to life." He has supported a number of Texas laws that make it more difficult for doctors to perform abortions, and for women to obtain them. The rising conservative star even targets contraceptives and Plan B; at a conservative summit in 2013, he characterized birth control as “abortifacients.” He is strongly against the Affordable Care Act’s contraceptive mandate, which forces employers to pay for birth control for their employees — a measure that enjoys substantial popularity with women. And time and time again, he's threatened to repeal the Affordable Care Act entirely. To add icing to the cake, Cruz also voted against the Violence Against Women Act.

Rubio’s positions largely lump him in with Cruz and Paul. He voted against the Violence Against Women Act. He opposed the Paycheck Fairness Act. He is staunchly pro-life, claiming that the science is unanimous that life begins with conception. But Rubio has also done more to put his money where his mouth is. The Florida senator was one of the original co-sponsors of the Pain-Capable Unborn Child Protection Act, a measure that would have banned all abortions on the federal level after 20 weeks. And he introduced the Religious Freedom Restoration Act, which would have allowed employers to opt out of the Affordable Care Act’s contraception mandate. But it's all OK, a campaign spokesperson told Time, because the senator works hard to combat sex trafficking.

The Wisconsin governor has won the adoration of conservative activists and the enmity of labor unions and progressives through his terms in office. The pro-lifer has taken just as much of a swing at women’s health provisions as he did at collective bargaining rights for public employees. Walker signed into a law measures that require ultrasounds for all women considering abortions, and which place onerous restrictions on doctors performing abortion procedures. His state budget has slashed more than $1 million from Planned Parenthood, forcing some of its clinics to shut their doors, risking low-income women’s health.

To add to the injuries of his policy initiatives, Walker also implied in an interview that any ban on abortions after 20 weeks wouldn’t need to have exceptions for rape or incest, because women would only be concerned about those situations early on in the pregnancy. “It’s in the initial months where they’re most concerned about it,” Walker told local television station WKOW.

Huckabee secured his slot so far down on the worst offenders’ list not so much based on policies he has enacted but because of how he speaks about women, and the hyperbolic political actions he threatens to take. When speaking at the 2014 Republican National Committee’s winter meeting, the former governor characterized state support for birth control as the worst kind of government paternalism, arguing that women should be able to control their libidos without help. Of course, the implicit assumptions in such remarks — that women should have to control or repress their sexual activity, and that the birth control is socially desirable only because it allows women to have all the sex — are incredibly insulting, and conform to the worst gender stereotypes.

Not to mention that Huckabee is virtually a pro-life crusader. After former Republican senate candidate Todd Akin made his disastrous “legitimate rape” comment in the 2012 election campaign, Huckabee was one of the few Republicans to continue to stand by him. The former governor has said he would deploy federal troops or the FBI to stop abortions, which he has compared both to slavery and to the Holocaust.

Out of all the people on this list, Kasich might be the most under the radar. He doesn’t tend to make inflammatory comments degrading women or specious scientific claims about reproductive health on conservative radio shows. But as women’s health activists have noted, Kasich has been behind a slew of anti-abortion laws that have slowly dismantled the women’s health infrastructure, and has cut funding for Planned Parenthood and other clinics in the state. Since he entered office in 2011, the legislature has passed 16 anti-abortion laws with his support, including a ban on abortions after 20 weeks and a prohibition on rape crisis centers that prevents them from talking to women about abortions. The state slashed $1.4 million in funding from Planned Parenthood, and half of Ohio’s abortion providers have closed during his time as governor. He has also fought the Affordable Care Act’s contraceptive mandate in federal courts. That all said, Kasich grudgingly allowed that abortions could be OK in cases of rape or incest.

Last but not least: the Donald. Not surprisingly, the millionaire-turned-political-hopeful has not left the trail of antiabortion policies in his wake that many of the governors and legislators he is competing against have. In fact, Trump was pro-choice until only a few months ago, when he announced that he'd had a change of heart on the whole abortion thing.

But what lands Trump at the bottom of this list of candidates is his long history of disrespecting, objectifying, and insulting women. In one telling incident, the Donald spent time reviewing the candidates for the Miss USA pageant for physical attractiveness, weeding out all those who did not meet his standards. "Some of the girls were sobbing backstage after he left," former contestant Carrie Prejean wrote in her 2009 book about the pageant experience. "[I]t was as though we had been stripped bare."

In this vein, Jezebel founder Anna Holmes, criticizes Trump and what she calls the “Trump Rule” — a sexist attitude towards women as sexual and aesthetic objects that are to be appreciated and then discarded. She runs through a number of examples of Trump discounting and undercutting women by insulting their appearance or their failures to comply with gender norms. (See his sleazy takedown of Angelina Jolie: “She’s been with so many guys.”)

It just reminds us that Trump’s attitude isn’t just insulting, but it is actually indicative of a political orientation that is dangerous to women’s rights across the board.