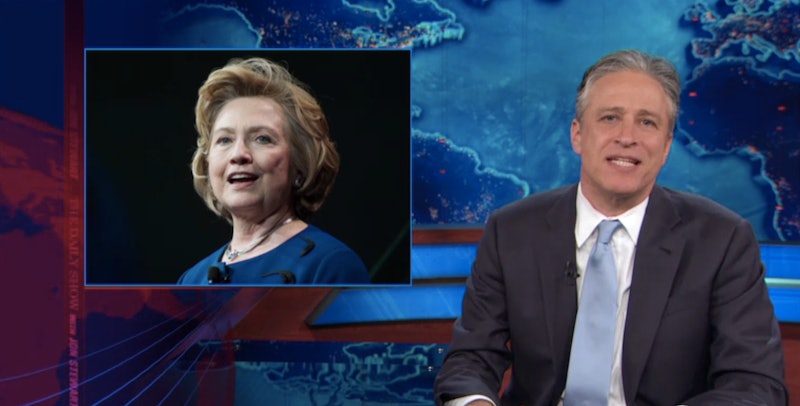 Can you believe that Jon Stewart's final, final episode of The Daily Show is airing on Thursday? I can't — and the realization has me absolutely gutted. In its history, The Daily Show has provided the best feminist moments, and commentary on the rampant sexism in the universe — not to mention, it's featured some of the best female correspondents in the 'biz, like Jessica Williams, Samantha Bee (who left earlier this year for her own show on TBS), Kristen Schaal, Olivia Munn, Susie Essman, Miriam Tolan, and Nancy Walls. This roster of astounding women that Stewart has featured on his show have produced some of the most brilliant, neatly packaged segments extolling feminism to the masses — and that's really what makes them the "best f*cking news team," ever.

Stewart has been on The Daily Show for nearly 18 years, and I have to give it up to him for finding some of the best female correspondents around, giving them a platform to speak truth to power, and often speaking it himself. (Or, as is often necessary, scream truth to power, because try as we all might, power just still doesn't get it.)

Here are seven of the best feminist moments that aired during Jon Stewart's time on The Daily Show, from both female correspondents and Stewart himself:

Jessica Williams is a goddess whom the world does not deserve, because she is just that perfect. In one of the greatest Daily Show segments ever, Williams destroys the absurd discussion that surrounds the issue of street harassment.

2. Jon Stewart On Sexism In Politics

This is a stellar segment about the rampant media sexism Chelsea Clinton and Hillary Clinton faced when Chelsea announced she was pregnant in April of 2014. People wondered, "How will it affect Clinton's decision to campaign for the president?!" Because you can't be a grandmother and have any other job, obviously. Best joke: "For god's sakes, when William Howard Taft was running for president, he was actually pregnant! And no one said anything."

Senior Women's Issues Correspondent Kristen Schaal rapped with Stewart in January 2015 about subway manspreading after the MTA asked men to "mind the gap."

4. Jon Stewart On "The Punanny State"

Out of pure rage, you may have blacked out about the fact that in 2012, Congress created an ALL-MALE panel to discuss contraception, after the Obama administration mandated religious-affiliated institutions must provide contraception to its female employees. Stewart rips the situation to shreds spectacularly.

Samantha Bee, National Treasure, braved the 2008 Republican National Convention to talk to attendees about the "decision" she made to carry her child to term. What's the word for that? Rhymes with voice?

6. Samantha Bee On Parental Rights Given To Rapists

In one of her final segments, Bee gets mad as hell about some states allowing rapists to claim custody to children they've fathered by rape.

7. Jessica Williams On "The Fault In Our Schools"

Williams once again exposes the horrifying reality of campus harassment — and, even worse, the lack of response and protection offered to victims from some colleges.

Trevor Noah: you better give it up to the women as much as Stewart did. Miss you already, Jon.