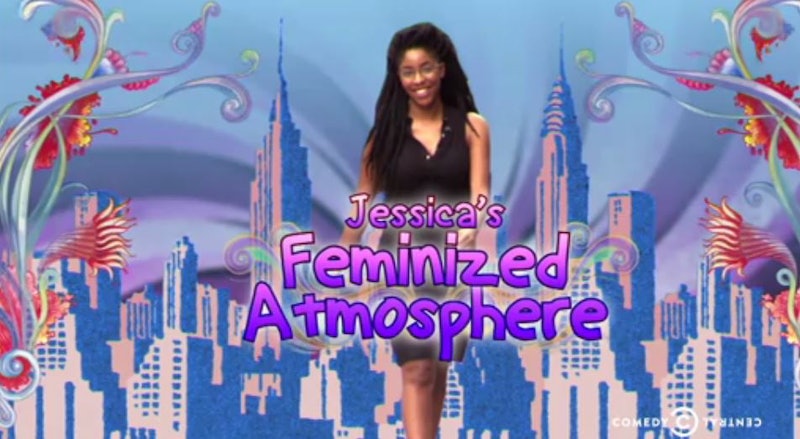 Jessica Williams’ brilliant Daily Show takedown of catcalls — even when they’re “nice” — has become the stuff of legend. But she’s not stopping there; her latest segment, “Jessica’s Feminized Atmosphere,” takes on exactly what it’s like to be a woman on a day-to-day basis. Equal parts searing, hilarious, and frighteningly real, it drives home why we still need to talk about street harassment, why it should never be minimized or dismissed, and why it’s never just hello.

The segment takes its title from a sound byte made by Brit Hume in which he painted men as the victims of society, not women: “In this sort of feminized atmosphere in which we exist today,” he said, men are constantly at risk of letting something “slip out” and being called sexist as a result. Poor babies! To see whether he was right, Williams invites us to “come spend a fun day in [her] world!”… and as you might have guessed, it’s anything but fun. Here’s how a typical day goes:

Williams starts out addressing her commute to work. “For most guys, it’s just a calm, boring commute,” she says, “but for me, it’s like I’m competing in a beauty pageant every day!” How fun! “Do men get super nice things said to them when they walk by an open construction site?” she asks

Or a random security guy on his lunch break?

To avoid these kinds of comments and unwanted conversations, all Williams has to do is go four blocks north to avoid the teenagers hanging out at the bodega, go three blocks west to get aroud “those creepy old guys playing dominos,” and continue zigzagging around the city to avoid “Wall Street douches, white guys, Latino guys, black guys, Middle Eastern guys… really any men,” she says. Her route ends up looking something like this:

And it only takes 55 minutes for her to get to work! That's... absolutely horrible. That commute should take 15 minutes, max.

But lest anyone be tempted to say that this is just one particular woman’s experience, Williams also arranged a panel of “one or two women” who are also bothered by this kind of behavior. That “small panel” looked like this:

They’re real women, and the things they had to say on the subject are horrifying for so many reasons. Here's a selection of them:

And when they started to fill in a map with push pins detailing where incidents of street harassment had happened, it ended up looking like this:

But the responses from most pundits is pretty much always the same: “We can’t stop it from happening.” “Boys will be boys.” “It was certainly provoked.” Right, because women simply existing is a provocation. Awesome. Thanks for that.

So what are we to do? Williams has some suggestions for us.

Rule number three: Avoid eye contact at all costs, even if it makes you walk into things.

Or you can travel in packs, no matter how impractical it may be:

I’ve been there. You’ve probably been there, too. What Williams’ segment states so clearly is that street harassment is utterly unacceptable. Nothing is an invitation for an unwanted comment — not what we wear, not how we walk, not where we go. A slow clap for Jessica Williams, everyone.