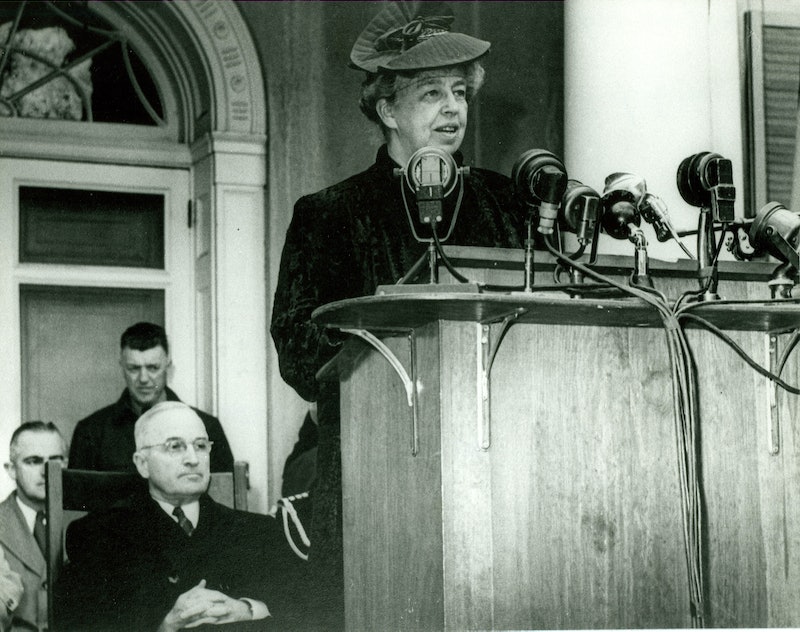 Most people know that the feminist movement has been, well, moving, for quite some time. There's really no better indicator of this than a look at the most feminist quotes by American first ladies, which demonstrate just how far the movement has come. In modern America, feminists' passionate activism mostly addresses our society's rape culture, abortion and contraceptive rights, the wage gap, workplace discrimination, the plight of the LGBT community, and racial inequality. It also addresses destructive social perceptions, which include negative attitudes toward female sexuality, body shaming, and gender roles and stereotypes in general.

But believe it or not, it wasn't too long ago that we were fighting for the right to own property, vote, legally obtain birth control, and have medically safe abortions. There's really no better measure of the movement's growth and change over time than the feminist quotes of first ladies past. Historical statements perfectly demonstrate the frustration of early feminists at the times of their husbands' presidencies, while more recent ones demonstrate how feminism has won plenty of battles, but still needs to win a few more.

... [R]emember the ladies and be more generous and favorable to them than your ancestors. Do not put such unlimited power into the hands of the husbands. Remember, all men would be tyrants if they could.

Abigail Adams was the wife of President John Adams, one of our Founding Fathers and the second POTUS in history. She wrote the iconic quote above in a 1776 letter to her husband, nearly two decades before becoming first lady. Regardless, it serves as a brilliant representation of feminism in her lifetime. Women were completely at the mercies of their husbands; they could not independently own property, nor could they vote. Their lives were dictated by men, and their culture commanded their complete respect and submissiveness in all things to fathers and husbands.

While modern feminist activists encourage but don't rely on men to promote gender equality, the above quote demonstrates that during Adams' lifetime, women were so undermined that their only real hope for equality was through appealing to men for help. And please, before you chime in with "not all men," remember that, sure, maybe not all men "would be tyrants if they could." — but all women in Adams' lifetime certainly experienced the tyranny of male privilege, and Adams was a feminist of her day for candidly pointing this out.

[T]his Society, to live and grow and become what we would desire it to be, must be composed of ... women. ... [M]uch of [society's] success was due to the character of the women of that era. ... I feel sure their daughters can perpetuate a society worthy the cause and worthy of themselves.

Caroline Harrison was a vocal advocate for women's rights throughout the presidency of her husband, Benjamin Harrison. The above quote demonstrates that, like activists of her day, Harrison recognized that American history was rooted in the contributions of women as much as it was in those of men, and that women played a large role in shaping the future and promoting social growth.

Her husband's presidency followed the Civil War, but the failures of the Reconstruction Era and structural racism remained a plague on race relations and the economic prospects of minorities in her day. In Harrison's lifetime, many women shaped society by increasingly contributing their efforts to poor relief and protecting black rights. This quote rings true today, as feminist activists tackle intersectional issues for social improvement.

I think any woman can discuss with her husband topics of national interest. I became familiar with more than politics. It involved real statesmanship.

Helen Taft was the first lady who preceded the presidency of Woodrow Wilson, during which women's suffrage officially became the law of the land. The above quote demonstrates the growing confidence and sense of empowerment that enabled suffragettes to claim their ultimate victory in 1920. Taft's words are revolutionary today, as modern feminists continue to fight stereotypes that portray intellect and physical beauty in women as mutually exclusive, as well as destructive cultural attitudes that glorify silence and lack of opinions in women. Her words certainly helped give women credibility with male lawmakers, and were probably a big boost to the early feminist movement.

I know what’s best for the President. I put him in the White house. He does well when he listens to me and poorly when he does not.

You might find little takeaway from First Lady Harding's words on the surface, aside from the fact that she probably "wore the pants" in her marriage to Warren G. Harding, the American president immediately following World War I. But there's plenty of feminism to be appreciated in a woman who proudly discusses her power in her relationship with her husband in the 1920s, as well as her ability to shape national policy.

There's still a stigma in modern society against "whipped" men who dutifully listen to their female significant others. Obviously, blind obedience to anyone, whether a man or a woman, should never be glorified, but a smart person never discredits the wisdom of another person, and Mrs. Harding was ahead of her time to point this out. The Hardings' relationship, for all the infidelity on Warren's part, defied the gender roles of their day and ours, and there's something very feminist about Florence's pride in this.

It is very possible to have both a home and a career, [for] in this modern age [women] are released from so many of the burdens our grandmothers and great-grandmothers had to bear.

Lou Hoover is arguably one of the most forgotten first ladies. She was the wife of Herbert Hoover, president when the Great Depression began, and she preceded First Lady Eleanor Roosevelt, one of history's most vocal, well-known women's rights advocates. But let's take a moment to appreciate her wise words, which should resonate with all women, from stay-at-home moms to careerists. Hoover's point wasn't that women should feel obligated to balance careers with child-rearing; her point was that they were endowed with the ability to make lifestyle choices that their grandmothers and great-grandmothers would never have dreamed of. Her words remain powerful today, as feminists continue to fight society's condescending attitudes toward mothers with careers, stay-at-home moms, and career women who don't want children.

A woman is like a tea bag — you never know how strong she is until she gets in hot water.

Eleanor Roosevelt is arguably the most consequential first lady in history, and her most feminist quote just so happens to be one of her most concise. It's no secret that our culture portrays women as the weaker sex, but as Roosevelt points out, there's plenty of underappreciated strength in femininity. First Lady Eleanor recognized that women were strong in their own right, and her words demonstrate that the feminist movement had evolved plenty since the lifetime of Abigail Adams. Women weren't completely at the mercies of men anymore. They were increasingly proving to patriarchal society that they could handle themselves in difficult situations.

I learned to be very independent. I could take care of myself and the baby and do things that I never dreamed I would be able to do alone.

It should hardly come across as a surprise that former First Lady Rosalynn Carter has always been capable of speaking the feminist truth — her own husband openly identifies as a feminist. When asked about how she managed while Jimmy Carter was away serving in the navy, Rosalynn made it clear that she was a devoted wife, but simultaneously an independent woman. Women could be loving wives and mothers, and still be ambitious, self-reliant, and capable of achieving their dreams. They can be happily married and still thrive on their own. It's time for us to acknowledge that women are as multifaceted as men.

Like I tell my daughters, women and girls can do whatever they want. There is no limit to what we as women can accomplish.

When asked if she thought we would see America's first female president, First Lady Michelle Obama's answer could not have been more perfect — or better supported by her work for education and equal opportunities for girls around the world. It's 2015, and despite all the lingering prejudice that, unfortunately, isn't going anywhere any time soon, young girls everywhere should know that they have the potential to achieve anything they set their minds to. Feminism is all about spreading the message that there is no limit to what women can accomplish. Whether a young girl aspires to be a painter or the President of the United States, as long as she's doing whatever she wants and living on her own terms, she's accomplished something truly great.