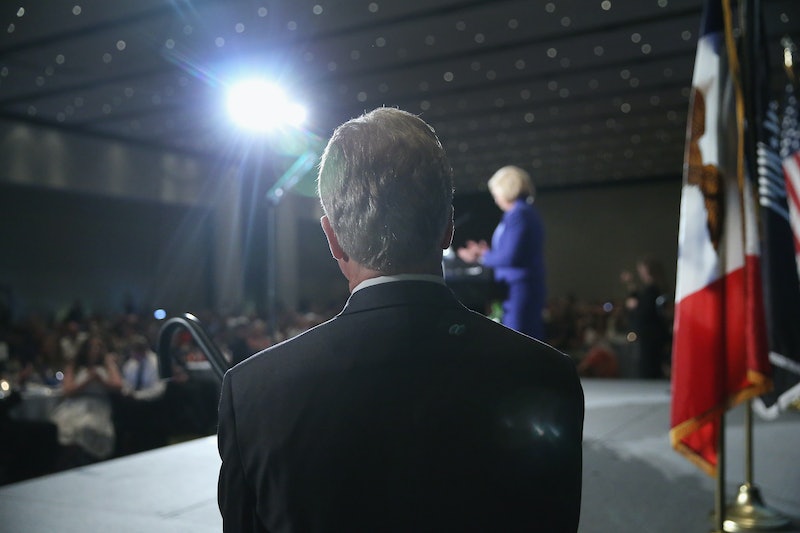 So, the Republican debates are interesting and entertaining (and infuriating) and all, but for a lot of us, it's not where the real core of the upcoming election is. While the GOP debates are great to watch to get a good understanding of the level of crazy that exists in this world, I'm much more concerned about when the Democratic debates will be. Although Hillary Clinton is currently considered the frontrunner, Bernie Sanders has been making some serious waves as the more progressive candidate — and many Elizabeth Warren fans, disappointed she isn't running, have flown into the Sanders camp. And now that there's the possibility Joe Biden might enter the race? Whew. Throw Martin O'Malley, Jim Webb, and Lincoln Chafee into the mix, and baby, we got a debate goin'!

Luckily for us, we now have some dates to look forward to. To kick off the primaries for the Democratic candidates, the first debate will be held in Nevada on Oct. 13. The big event will be broadcast on CNN, and the news channel apparently knows what millennials want, because it'll also be streamed online at CNNgo. The five current candidates (six, if Biden does enter the race) will square off with each other, likely touching on issues such as income inequality, foreign police, the Black Lives Matter movement, and more.

But that's not all! There will be six Democratic debates in total over the coming months, which O'Malley has actually criticized as not enough. Official candidates were required by the Democratic National Committee to sign an exclusivity clause that prevents them from attending unsanctioned debates. If a candidate were to participate in one, they'd be barred from participating in a party-sanctioned debate, which could deal a huge blow to a campaign. The full schedule of Democratic debates is:

So, we're looking at one per month starting in October. We've got a long road ahead of us, folks, but it's an important one. Debates are crucial for voters to pay attention to if they want to be truly informed on where their favorite candidate might really stand on a specific issue. It's a way to discover new facts about each politician and honestly, also to judge them on what strengths and weaknesses in character they might show. So be sure to tune in — being knowledgeable about the election is super sexy.