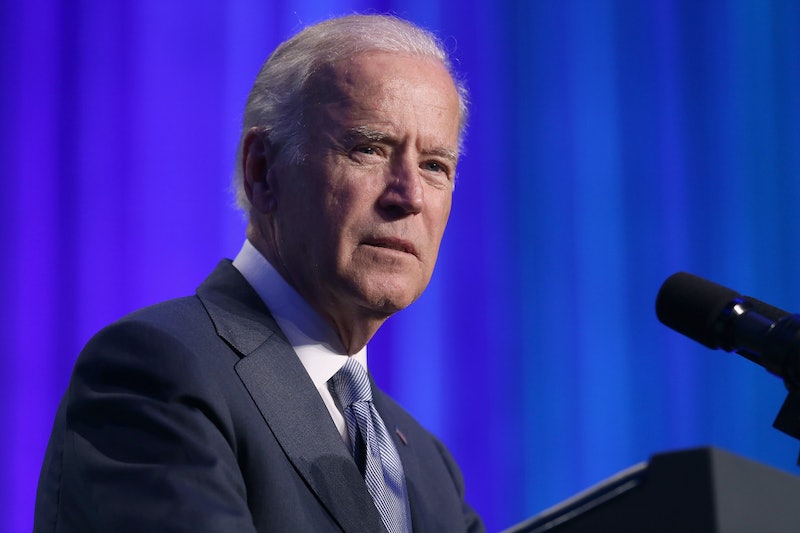 Two months ago, Vice President Joe Biden endured what's been a a tragically familiar experience for him: he lost a child. Having already once suffered through the death of his first wife and young daughter back in 1972, an experience he's spoken movingly about before, his 46-year-old son Beau died from a recurrence of brain cancer. He passed away at Walter Reed Army Medical Center on May 30, and now, a report has come out claiming that Beau Biden's last wish was a Joe Biden 2016 presidential run.

The question of whether Biden will end up jumping into the 2016 race has been on the minds of a lot of Democrats lately — you can be sure it's been on Hillary Clinton's, and some Democratic fundraisers have been lining up as though it might happen — but this report adds a decidedly human angle to the usual political brouhaha. It comes from Maureen Dowd, who wrote for The New York Times this weekend that as Beau Biden was dying, he attempted to secure a promise from his father that he'd run for president.

It's a touchy subject, to be sure. It's reported as a simple conversation between Beau and Joe, and the source for Dowd's information is entirely unclear. But it's not as though there haven't been rumblings along these lines before — a June report from Politico made much the same point.

Dowd's report begins with a strange and unnecessary comparison between the Hillary Clinton email scandal and New England Patriots quarterback Tom Brady's current snafu with the NFL. But it eventually segues into discussing a tender scene between the two men, after, according to Dowd, "Beau realized that he was not going to make it."

At the table, Beau told his dad he was worried about him.

My kid’s dying, an anguished Joe Biden thought to himself, and he’s making sure I’m O.K.

“Dad, I know you don’t give a damn about money,” Beau told him, dismissing the idea that his father would take some sort of cushy job after the vice presidency to cash in.

Beau was losing his nouns and the right side of his face was partially paralyzed. But he had a mission: He tried to make his father promise to run, arguing that the White House should not revert to the Clintons and that the country would be better off with Biden values.

It wouldn't be the first time that a prospective candidate's family weighed into their decision whether to run, but the tragic intimacy of the scene Dowd describes feels as though it leads this into very different territory, especially considering how much of this precise kind of heartbreak Joe Biden's endured throughout his life.

If he did want to enter the race, it'd make for an interesting addition, there's no doubt about that. Having another credible establishment Democrat in the race could complicate things, opening up some more space for Vermont Senator Bernie Sanders, and pushing Clinton in some of the areas she's weakest in — her poll numbers for honesty and trustworthiness are very concerning, for example, whereas Biden's are strong.

The only real question is whether he wants to run, and that's a question with no wrong answer. If Dowd's report is correct, and he feels moved by his son's wishes, that could be a very emotional factor in anyone's decision-making. But running for president is a physical and mental grind, and Biden is probably still feeling a lot of grief, so it's first and foremost up to him.