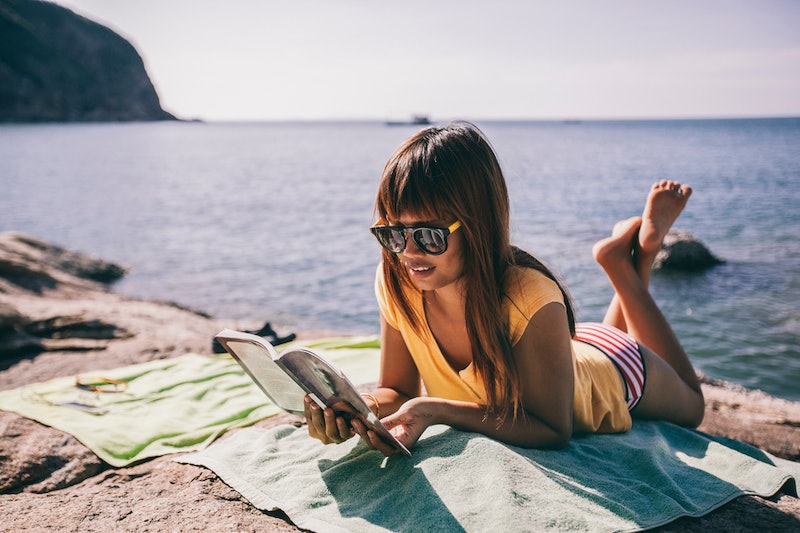 Summer is the most wonderful time of the year, but everything wonderful comes with a downside — and when it comes to the glorious radiance of the sun, that downside is sunburns. But why do we get sunburns, anyway? And why do we tan? The common belief is that the heat of the sun burns skin — we do call them "sunburns," after all — according to SciShow's new video, "What Causes Sunburns?", that's not actually quite the case.

Of course, it's pretty commonly known that deliberately tanning, both in the sun itself and at tanning salons, can damage your skin and even cause skin cancer; that's why everyone is encouraged to lather on sunscreen (at least SPF 30 and waterproof) at least 15 minutes before sun exposure no matter what time of year it is, as well as to be extra careful during the summer months. If you're getting frequently sunburned, it means you didn't apply sunscreen to that particular spot, you're not applying enough sunscreen, or you're not applying it properly to begin with. Of course, sunscreen isn't always 100 percent sunburn proof, so it's possible to get burns and tans even when you apply; even so, applying sunscreen will protect your skin from harmful ultraviolet radiation that can, in the long and short term, wreak havoc on your skin.

So how are we getting these burns in the first place? Sci Show explains:

1. The sun is not actually tanning or burning you.

That's right, folks, so stop blaming the poor thing for all your peeling. Tans and burns are actually how your body defends itself. But how exactly does it work? Well...

UV radiation has enough energy to damage the DNA of your skin's cells. The three types of UV radiation are UVA, which packs the least energy; UVB, which is somewhere in the middle; and UVC, which puts out the most energy. UVC doesn't usually reach us since it's absorbed by the atmosphere before it gets to the Earth's surface, but UVB causes sunburns and UVA makes you tan.

3. When special receptors in your skin detect UVA radiation, they produce extra melanin.

These receptors, which are called melanocytes, detect UVA radiation in sunlight and start to produce more melanin — that is, the agent responsible for how light or dark your skin is — in response. More melanin is equal to darker skin, while people with less melanin have lighter skin. The job of the melanocyte is to absorb the UV radiation before it can damage a ton of your skin cells.

4. So, when you tan, your body knows there's about to be more sun exposure.

Tanning is really your melanocyn taking preemptive measures to make sure you stay protected from even more harmful UVA radiation.

5. But sometimes, this isn't enough.

Sometimes, when UVB radiation damages a cell's DNA, the cell will destroy itself. If enough cells do this programmed suicide (also called apoptosis), an immune response will kick in in the form of a sunburn. Sunburns, believe it or not, actually act to protect you: When you get one, it means that the DNA in your skin cells is so damaged that the cells must die to prevent themselves from mutating and giving you cancer. So basically, your skin cells are dying for your sins.

6. There's a reason your sunburns are red and warm.

After apoptosis, blood flow will rush to your sunburn to help the area heal. Eventually, all the dead cells on your skin will peel away in what is known among tanners and beach-goers everywhere as the Infamous Summer Back-Peel.

So, basically, the sun isn't directly causing your skin to turn red, hot, and peely. It's your skin telling you to chill on the heat and either reapply sunscreen or get the hell inside. Thanks, skin. You da best.

More like this
13 Summer Solstice Quotes To Celebrate The Longest Day Of The Year
By Sadie Trombetta
13 Non-Toxic Sunscreens Under £35, So You Can Glow Responsibly
By Lauren Sharkey, Rebecca Fearn and Jessica Morgan
7 Derm-Approved Tricks That'll Help Ease Sunburn Pain
By Paris Giles
6 Abortion Advocates To Follow On TikTok
By Sara Youngblood Gregory
Get Even More From Bustle — Sign Up For The Newsletter