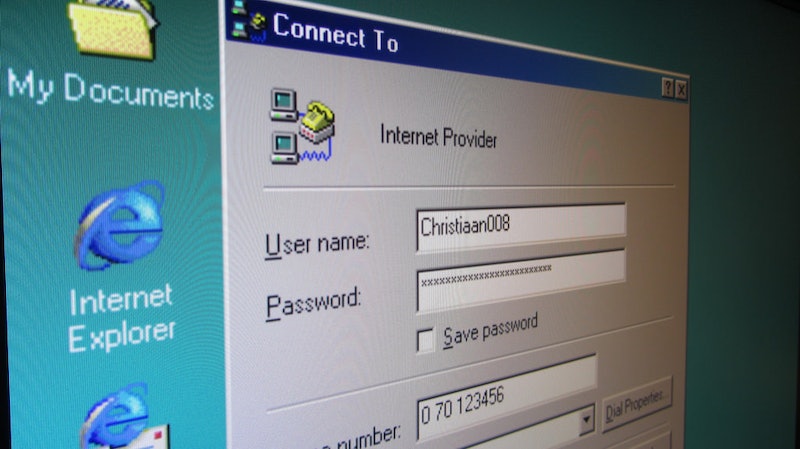 One of the things that often separates older Millennials — those of us in our very late 20s and early-to-mid 30s — from the younger ones is how much a part of our lives the Internet was when we were kids. I have relatives who, like myself, are considered Millennials; however, since they're on the younger end (still in or just recently graduated from college), they grew up with the Internet kind of just always being… around. Me, on the other hand? I turned 30 this year, and the Internet definitely wasn't always a thing when I was young. In some ways, we grew up alongside the online world; by the time the younger Millennials came around, it had already been established as an inescapable Part of Life. Either way, though, most of us have affectionate memories of our first days on the Internet; it's one of the great equalizers.

The AskReddit thread began to evolve as it went on (as AskReddit threads are wont to do), becoming less about the very first websites you remember going to and focusing more on the websites you spent all your time on right after you discovered the Internet. My first website was the Crayola website, for example; however, the sites I remember most fondly were more like the ones that popped up in this thread. So here — have a look at 10 websites you've probably forgotten about, but on which you likely spent a good deal of your time on back when you still had dial-up. Most of them are still in operation, so go ahead. Check 'em out. Thursday's a good day for nostalgia.

This one? Ooooooh, this one. This probably dates me horribly, but I was already in college when Albino Blacksheep was in vogue — which was perfect in some ways, because it provided the bite-sized doses of Flash animation comedy we all needed during exam season in the days before YouTube. Classics include “The End of the World,” “The Fifth Avocado,” and “Tales from the Leet” — all of which are available on YouTube now, but whatever. Sometimes, you just need to go back to basics.

Mike Chapman and Craig Zobel created Homestar Runner in 1996, although it wasn't until 2000 that the first Flash-animated cartoons began appearing on HomestarRunner.com. Homestar, Strong Bad (and his emails, of course), Strong Sad, The Cheat, and the entire rest of the show's sizeable cast of characters became a huge hit; even so, though, the site went largely on hiatus between 2009 and 2014. Starting in 2014, though, new material finally began appearing on the site again — and a new Strong Bad was released in April of 2015. More, please!

To be honest, I'm not entirely sure why I frequented Newgrounds so much during the late '90s and early 2000s; I didn't actually enjoy it all that much, so maybe I was just trying to create some sort of “edgy” persona for myself (because that's what we all do when we're teenagers). Newgrounds has reinvented itself a few times over the years, with its earlier iterations being known mostly for browser games that probably raise a lot more eyebrows now than they did then. Nowadays, it's tagline is “Everything, By Everyone”; it features everything from animations and videos to games and art.

A lot of the precursers to social networking as we know it today involved trying to build an actual, albeit digital, world. The Finland-based Habbo Hotel was one of those worlds, with users taking up residence inside one of 12 “hotels.” I never actually played around with this one — I recall the name vaguely, but I have no idea what it's actually like — but it seems to have done pretty well for itself in the years since its creation in the early 2000s. It's still around, it's gotten bigger, and it's aimed at teens.

Should I be embarrassed about the fact that I kind of loved Neopets when I was 16? Answer: No, because nobody should be made to feel embarrassed for enjoying the things they enjoy. NO REGRETS… even though I haven't checked on my little dragon pet for probably about 14 years. That I might regret. Sorry for abandoning you, Roger.

First launched in 1999, the virtual pet community is still alive, although there seems to have been a little bit of upheaval at the company recently (do with that what you will). Also, in some ways, the world has grown more interesting as a study in economics than anything else. The online world is such a fickle place, is it not?

Back before the days of BuzzFeed quizzes and PlayBuzz, we had Quizilla — although somehow, Quizilla ended up being more a hub for fanfiction than actual personality quizzes. The way I remember it is the way it looked on February 2, 2004:

But it underwent a ton of changes before it was eventually shuttered in 2014. These days, Quizilla.com redirects to Teen Nick's website.

The work of Jonti “Weebl” Picking, the weirdly entertaining repetition of a bunch of badgers doing calisthenics while a mushroom and a snake hang out elsewhere has captivated Internet-goers since 2003. I don't know about you, but I kind of love the idea of it running quietly in the background in perpetuity. SNAAAAAAKE!

First launched in 1998, Fanfiction.net has since become one of the world's largest fanfiction archives (although I'll admit I'm not sure if the entirety of Tumblr counts as one entity, so do with that what you will). Back in my day (she said, sounding like an old fogey), it was where we went after the season finales of our favorite television shows aired, because, well… we needed to tide ourselves over with something, right? (I'm looking at you, Season 5 of Buffy the Vampire Slayer). Almost 20 years after its inception, Fanfiction.net still looks relatively similar to how it did in the early days — which is pretty remarkable, when you think about it. Its original fiction and poetry sister site, FictionPress.com, is still around, too.

Status: Against all logic, still in operation — and a heck of a lot more elaborate.

Remember how HamsterDance.com once consisted of nothing more than a sea of pixelated hamsters bopping around to the same song on repeat? Well, these days, Hamster Dance is actually an entire brand. Created in 1998 by Deidre LaCarte, then an art student from Nanaimo, British Columbia, Hamster Dance was originally meant as a personal project; LaCarte had a competition going between her sister, her best friend, and herself to see who could generate the most web traffic. She used her pet hamster, Hampton, as her inspiration, created four simple GIFs, multiplied them a bunch of times, and set the whole to music. And, well…

...I think it's safe to say that LaCarte won that competition.

You can see the original version here. Also, I apologize in advance for getting that damn song stuck in your head.

Status: Still very much in operation.

By “IMDb,” though, I don't mean IMDb as we know it today; I mean IMDb as it was in the mid-to-late-'90s. The now-indispensible source for information about all your favorite movies began as a Usenet project in 1989 or 1990 (accounts differ); in 1993, engineer Col Needham began organizing efforts to put the project on the World Wide Web; IMBDb was incorporated in 1996; it was purchased by Amazon in 1998; and, well… you know how the rest goes.

My, how the times do change!