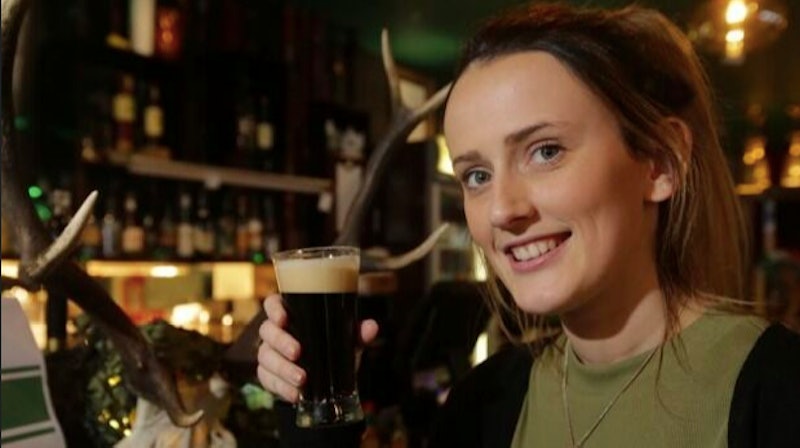 This may ~come~ as a surprise to you, but there is a stag semen infused beer making the rounds in New Zealand, and people are...surprisingly chill with it. The Green Man Pub has become so well-known for this beer that people aren't just chill with it, but actively heading over there to get a slurp of the stuff. It may seem a little out of left field, but Steve Drummond, the director of the pub, is no stranger to experimenting with semen in food. (Can we just pause here for a moment and absorb the beautiful weirdness of that sentence?) The inspiration began in 2011 when he developed a horse-semen dish to enter the Monteith's Wild Food Challenge. When the submission was introduced to the patrons of the pub, the apple semen-infused shot ended up being successful enough to sell for a whopping $25 a pop (roughly $16.34 in U.S. dollars).

"One of our staff had been playing with the idea of doing something crazy with beer," Drummond shared with Bustle. "The semen-and-beer thing just kinda came to us. We played with the idea a little more and then created the concept for Stag Semen Stout. It's been brewing in our mind for most of this year. Then we came across a brewery who was willing to contract manufacture it for us."

None of this would be possible without Lagoon, the stag who provides the semen. "Once Lagoon had finished his fun the semen was airfreighted to our contract Brewer, Kerry Gray from Choice Bro’s in Te Aro Wellington," said Drummond. "The semen is injected into the beer during the fermentation process. The beer is then transferred to Black Dog Brewery where it was carbonated and some tapped of and bottle."

Lagoon, on his part, had a very restful sleep after providing his key ingredient, according to his owners.

So what exactly does stag semen–infused beer taste like? Drummond says that it's a chocolate stout with coffee notes, but the semen is something you'd have to try yourself to be able to describe. "Generally people love it, everyone so far has swallowed and not spat," he said.

The beer is available on tap at the pub and in a limited number of bottles as well. So raise a glass to the decidedly not stagnant stag who made this all possible, and to the brave humans who tried it first.