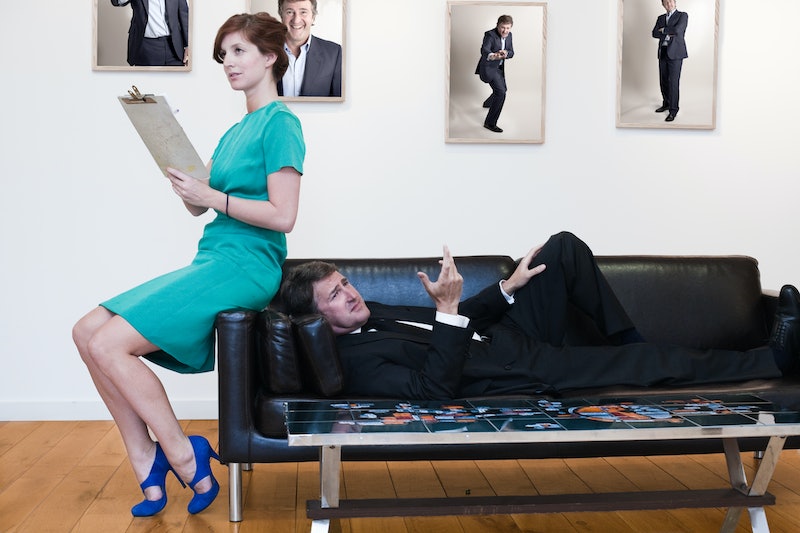 So, you think you're an introvert. You scored "I" on a Myers-Briggs test. Your friends describe you as reserved and independent. And you may very well be introverted — but an additional explanation for your behavior could be underway: Some self-described introverts might actually be covert narcissists. The two personality profiles contain many overlapping traits, but they stem from very different roots.

While we can all be a bit narcissistic at times, some people take narcissism to a whole new level, with Narcissistic Personality Disorder at the upper extreme. Symptoms include a feeling of self-importance, preoccupation with fantasies of success and power, exaggeration of one's accomplishments, and a sense of entitlement. There are two clinical types of narcissists: "arrogant/overt" and "shy/covert." Psychologist Scott Barry Kaufman writes in Scientific American:

The covert narcissist has also been called the "hypersensitive narcissist," not to be confused with the highly sensitive person.

Does this sound a lot like you? To quell any self-diagnostic urges you might have, most introverts are not narcissists. But don't take it from me — there's a scale called the Hypersensitive Narcissism Scale to measure your covert narcissistic tendencies. There are 10-question and 23-question online versions of the test, created by psychologist Jonathan Cheek, which asks you to rate different statements about yourself on a one-to-five scale from "uncharacteristic" to "very characteristic or true." Here are the qualities on the 10-question scale. Scroll down for what your results mean.

1. "I can become entirely absorbed in thinking about my personal affairs, my health, my cares or my relations to others."

The way the test describes self-absorption gave me pause for a second; I definitely worry about those things. But according to Kaufman, identifying with these descriptions doesn't make you a narcissist, since "there's some overlap between this scale and other tests that measure introversion and sensitivity." If, however, you come out of conversations with your friends without learning anything about them, you may want to take an honest look at yourself.

2. "My feelings are easily hurt by ridicule or the slighting remarks of others."

Are we sure this isn't just a test for being a teenager? Or, more generally, for low self-esteem? It's actually the opposite, Cheek told New York Magazine: To be a narcissist of any sort, "you have to have a pretty grand sense of yourself." Covert narcissists just believe others don't recognize how grand they are.

3. "When I enter a room I often become self-conscious and feel that the eyes of others are upon me."

Again, this might sound like self-consciousness, but it actually stems from having high a opinion of oneself.

4. "I dislike sharing the credit of an achievement with others."

You want to be the center of attention — unless something goes wrong. Narcissists will take all the credit for an accomplishment but none of the blame for a mistake.

5. "I feel that I have enough on my hands without worrying about other people's troubles."

You don't see the point in solving others' problems, since that doesn't benefit you — but you're happy to talk their ears off about your own.

6. "I feel that I am temperamentally different from most people."

7. "I often interpret the remarks of others in a personal way."

You have a nagging suspicion that every generalized statement is secretly directed toward you. After all, since everyone's eyes are on you, it makes sense that they're also talking about you.

8. "I easily become wrapped up in my own interests and forget the existence of others."

Anyone involved in an artistic pursuit might relate to this, but the covert narcissist's tunnel vision lasts beyond the culmination of a project. A Psychology Today guide to narcissistic personalities describes one woman who decorated and recdecorated her daughter's home without asking.

9. "I dislike being with a group unless I know that I am appreciated by at least one of those present."

Everyone needs to feel appreciated, but narcissists feel entitled to appreciation before people have even gotten to know them.

10. "I am secretly 'put out' or annoyed when other people come to me with their troubles, asking me for my time and sympathy."

You honestly don't really care about other people's problems. Psychology Today's Carl Vogel cites one (unnamed) psychologist's comparison between a narcissist and an SUV: "You're having a great time, even while you hog the road, suck up extra resources and put other drivers at higher risk."

The average score for the college students who tested the scale is 29. If you scored over 35, you may be a covert narcissist. If you scored under 23, congratulations; you're one of the least narcissistic among us.

If it's any consolation, if it turns out you scored over 35, you're not alone; I got a 40. Whoops. Ah, well — let's just remind ourselves that the test doesn't understand our unique, special personalities, just like everyone else in this world.