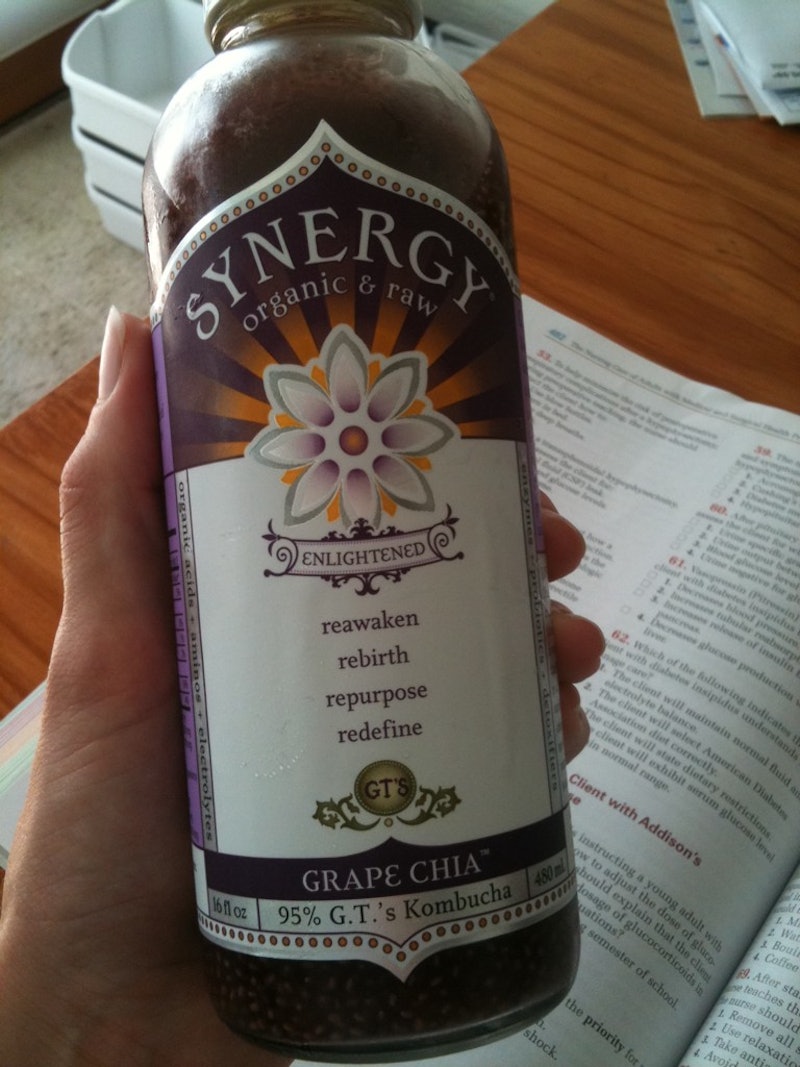 The nutritious — and trendy — probiotic drink kombucha dates all the way back to the Qin Dynasty in 250 B.C., when it was used to aid digestion, balance the Middle Qi (the stomach and spleen), and help people focus on healing. Today, nutritionists and celebrities alike swear by the elixir and its restorative properties. It's made by a long process of fermentation from a SCOBY (Symbiotic Culture of Bacteria and Yeast), and the final product contains bacteria, yeast, acids, and enzymes that are meant to detoxify the body. That said, there have been whispers lately indicating that the concoction isn't quite as flawless as we've been told it is. Either way, I doubt kombucha will leave the shelves of Whole Foods anytime soon. But what about the rumors that kombucha can make you drunk?

I know that for my part, I caught onto this particular health craze a little late — and I was shocked to to find that I felt slightly intoxicated after my first taste. It was subtle, not like I had just taken a few shots of Patron, but the sensation was pretty distinct. OK, maybe it was because I chugged a bottle and a half of the Synergy/GTS Gingerade flavor — the best, by far — and I'm just naturally a lightweight. But still, I had to look it up and make sure I wasn't the only person on the planet getting buzzed off of the stuff. Well, turns out I'm not; there are plenty of online forums and blog posts about everyday folks feeling somewhat drunk after a solid helping of this probiotic drink. Here are all the facts you need to know about the elusive kombucha intoxication.

How Much Alcohol Does Kombucha Have?

Put simply, kombucha is an alcoholic beverage. During fermentation, the yeast transforms sugar into alcohol, which is then converted into gluconic acid by way of the bacteria. But some of the ethanol is leftover, resulting in between .5 and 3 percent of alcohol, depending on how long it's been fermenting. (If you need some perspective, beer contains four to six percent.) The Food and Drug Administration legally requires any drinks that have more than .5 percent alcohol to be labeled alcoholic, which is why some carriers in 2010 had to take the kombucha products off the shelves, as they significantly exceeded the limit. In fact, the Australian brand Buchi was pulled off out of stores a few weeks ago because theirs was potentially intoxicating — the alcohol level was a whopping 3.7 percent in a 500 milliliter bottle.

I suppose some companies are making the best of it: A new brew called Kombrewcha was released last year in Connecticut and New York; it has been fermented for longer and contains two percent alcohol, so it's more of a carbonated tea-beer mixture than anything else. It boasts all the antioxidant, probiotic qualities of original, not-so-boozy kombucha, but it's marketed as an alternative, lower-alcoholic product.

Can You Really Get Drunk Off Of It?

It really depends on what you've got your hands on. If you're grabbing a basic bottle of kombucha from your local grocery store after a yoga class, you likely won't feel anything more than giddy. But if you are chugging kombucha like it's going out of style, you could potentially consume the same amount of booze as if you went out for a couple cocktails. However, this is highly unlikely; imagine how much work — and trips to the bathroom — that would take.

Fermentation experts say individuals who report feeling drunk after a serving of kombucha are probably suffering from a histamine intolerance. These people often react this way to fermented foods and beverages because they lack an enzyme called DAO, which helps the body process histamine. One solution is to use a digestive enzyme as a supplement to your probiotic helpings.

What If You Don't Want The Buzz?

Even after kombucha is bottled, it still ferments in there, especially if it's mass produced and there is a lot of time between production and selling. Take a look at the packaging and expiration dates, and grab the one that was most recently shelved; it's less likely that the alcohol content will have increased. If you're making your own kombucha at home, which is an extremely easy, much cheaper process, you might want to shorten your brew cycle, which will result in a less intense drink.

If you're a lightweight, you should also make sure you have a full stomach when you drink kombucha. (Temporary euphoria is known to accompany kombucha when consumed without any food in your system, though that doesn't sound so awful.) Also, some connoisseurs recommend watering your kombucha down, particularly if you're the kind of person who is sensitive to alcoholic drinks.

Is It Bad For You If You Get A Buzz Off Of It?

Don't worry, you're not harming yourself if you reach a kombucha buzz. You might even be mistaking a natural energy boost for being slightly drunk — this is normal. It's said that this carbonated tea improves digestion quite quickly, offering you the same pick-me-up as an afternoon coffee would, only without the crash. So it could be a good thing if you feel a bit high; your body could be efficiently absorbing all the benefits. Actually, for a lot of people, this beverage is used to curb cravings for real alcoholic drinks and caffeine.

If you are feeling any hangover-like symptoms after drinking kombucha, though, you should maybe back off. Drinking it being an uncomfortable experience completely defeats the purpose of the health product in the first place. And as always, if you have any specific medical concerns, chat to your doctor or a medical professional.