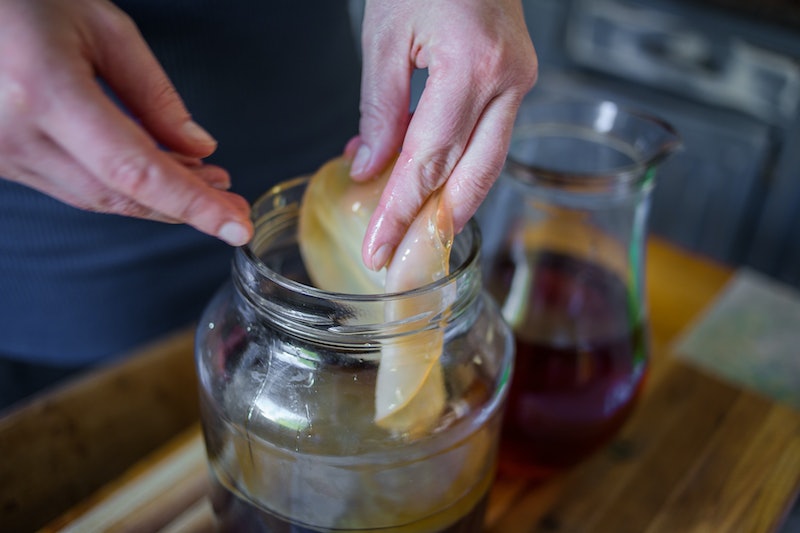 "Healthy alcohol": This phrase means almost as much to me as "student debt forgiveness." But I have good news — a miracle may be in our midsts! Our quest for a healthy boozy beverage may soon be solved by HoneyMoon Brewery's alcoholic kombucha. It's not available yet, but HoneyMoon Brewery owner Ayla Bystrom-Williams hopes to release it by the end of 2015. I don't know about you, but if you ask me, she definitely has the right idea with this creation.

According to the Mayo Clinic, Kombucha is a colony of bacteria and yeast added to sugar and tea so it can ferment; after the fermentation process is complete, it results in a concotion containing vinegar, B vitamins, and numerous other chemical compounds. This fermented tea has been dubbed the "elixir of life" by many — but even though most health benefits of kombucha as yet remain unproven, it does contain a ton of healthy probiotics which help keep your tummy happy.

With this in mind Ayla Bystrom-Williams decided to create a beverage that combines the "healthiness" of kombucha with the alcohol levels of beer. "HoneyMoon is my female founded, Santa Fe based, bad-ass brewery which utilizes both traditional styles of beer brewing and the kombucha style of brewing," she writes on the HoneyMoon Brewery "About" page. "HoneyMoon Brewing fits right into the growing Craft Beer Movement by offering traditional beers while also filling a gap in the market with kombucha style beers."

With ingredients like spring water from northern New Mexico, local Amalia and Neo Mexicanus hops, and wild bacteria and yeasts, HoneyMoon hopes to create a selection of complex, unique and refined brews. Along with their Kombucha beer, they also hope to offer Kvass, New Mexican Sour Ale, New Mexican Herbed Bitters, and Dandelion Root American Stout in the future.

Bystrom-Williams promises a finished product made with fresh ingredients that is low in sugar content, gluten free, and a natural detoxicant. The brewery is planning the first release of the Kombucha beer for late 2015. Yes, please!