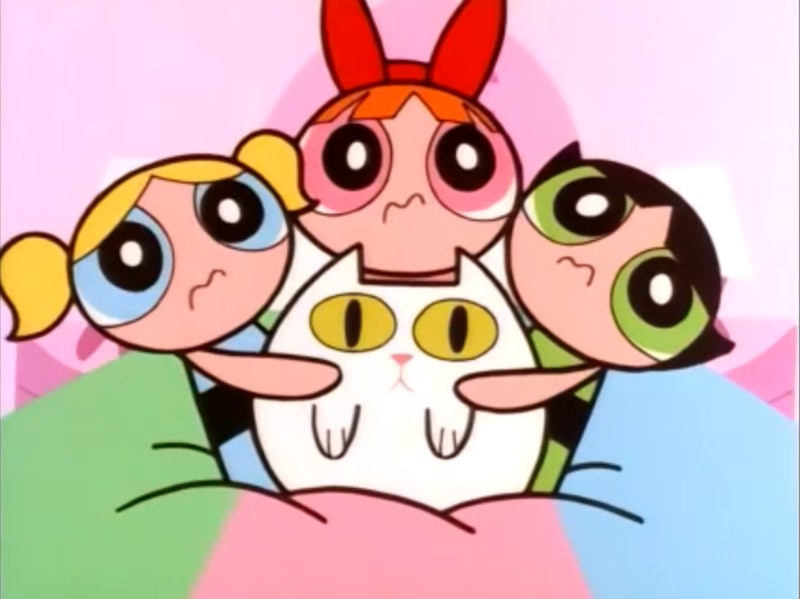 Everyone who knows me knows of my unfaltering allegiance to The Powerpuff Girls and their fight against crime before bedtime. Even as I stumble awkwardly into my twenties, I can recognize both their profound influence on my feminist values and their lasting quality compared to the bizarro shows of today. But one of the things I really appreciate the most is the slew of dirty jokes in the Powerpuff Girls. Yes, that's right. There was a lot of adult humor that was snuck into the pastel-hued children's show.

Yes, jokes for adults aren't just exclusive to your favorite Disney movies. They're ever present in all your favorite cartoons, and The Powerpuff Girls? They're no exception. Hell, just look at the villains if you want any proof of hidden-in-plain-sight adult content. I didn't know what the word "seduce" meant until baddie Sedusa hit the screen. And what about HIM? What the heck was going on with that guy? Was that cross-dressing Satan? I still don't know.

But these are just the tip of the iceberg. It's time that we delve a bit deeper into the specifics, the dark well of Powerpuff Girls dirty jokes. Remember, there's no turning back from here. Once you scroll down, you'll never be able to look at the Powerpuff Girls the same way again.

This one is the most blatant, but never forget the time Sedusa, in the guise of Ms. Bellum, would entice the Mayor in order to get the night off. This scene, though, where Sedusa-as-Ms.-Bellum guides the Mayor's pencil into the pencil sharper, is waaaaaay too much of a sexual metaphor for my liking. Even today, it feels like too much.

2. When We Learned Some Family Background On Robyn

The Powerpuffs make a new little friend, their neighbor Robyn, and, when they introduce her to the Professor, Bubbles remarks that he made them in the lab by accident. Robyn then comforts the Professor, stating she "was an accident, too." Awkward.

3. When Mojo Jojo Gets Some Amorous Attention In Prison

I'll be honest, I'm not 100 percent comfortable with this one, but it is what it is. Mojo Jojo gets thrown into prison next to a big, burly guy that's eyeing him suggestively. The narrator remarks, "Love is in the air!" Dark.

4. When The Powerpuffs Help Professor Utonium Get Ready For His Date

I'm not exactly sure what's going on here, but there's some cause for side-eye. The girls are getting Professor ready for his date with Ima Goodlady (spoiler, it's Sedusa again), and, among the bow ties and flowers (what kind of first date is this?), Buttercup slips something else in his pocket. Maybe it's something innocuous like breath mints, or maybe it's something to keep the professor from making any more accidents...

5. When The Rowdyruff Boys Got Way Too Big To Handle

You know how the Powerpuff Girls were initially able to defeat the Rowdyruff Boys by kissing them? Well, HIM decided to give the boys a cootie shot, so kisses only make them bigger and stronger. Ahem. The only way to defeat them? According to Blossom, "Whenever their masculinity is threatened, they shrink in size." Haha... ha.

7. When Fuzzy Lumpkins Boinks Some Mud

YEAH, UM. This is a bit extensive, but the Professor stumbles into some flowers and dirt and gets mistaken for a Lumpkin (or whatever Fuzzy is). Fuzzy falls in love with him/her, and is so dedicated that, even after the mud is knocked off Professor, he takes it home for their wedding night. Do not disturb? Sorry, I'm disturbed forever.

8. When The Powerpuff Girls Battled Sex-Ism

In an episode of the Powerpuff Girls titled "Members Only," the girls try to join a boys' club of famous superheroes only to get turned away because they're little girls. More emphasis was put on the "girls" part than the "little" part, which led the girls to go home in a huff, just in time for a gigantic, powerful villain to land in front of the Association of World Super Men's Super Summit and challenge everyone there to, "Step forth and bring thy manhood against mine own, so that we might see who has the upper hand upon the measuring stick!"

I'm not even going to touch any of that.

9. When Blossom Pretends To Be Ms. Bellum

In "The Powerpuff Girls' Greatest Rainy Day Adventure Ever," it's raining outside, so the girls spent the whole day inside playing pretend. It was an incredibly adorable parody of your average Powerpuff Girls episode, until Blossom decided to dress up as Ms. Bellum — and I don't think I need to explain this image any further.

You're welcome for your ruined childhood.