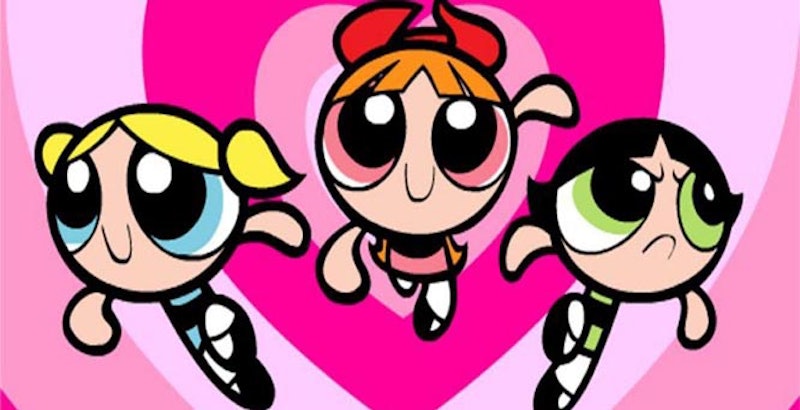 Let's cut to the chase, I'm 23 years old, and I have a Powerpuff Girls backpack. It is purple and plastic, and I have zero shame about carrying it on my person, because the Powerpuffs helped make me into the strong, socially-concious woman that I am today. And as we wait for the Powerpuff Girls' 2016 return to television, I think we should celebrate the wonderful effect they had on our generations' current feminist agendas.

And I'm not talking about the oversimplified Spice Girls brand of "girl power." It bleeds deeper than that, to issues of identity, of ageism, of defining what it means to be an ally to women. These are important things, and the team managed to deliver these messages subconsciously in a show that was still pretty, funny, and dealt with an antagonist called "Fuzzy Lumpkins."

Okay, I may be looking into it a smidge (a BABY smidge, if that), but I stand by it: The Powerpuff Girls had a profound and mostly positive influence on my current values. And what's wrong with sussing out some important lessons within a children's cartoon? Here's a few of the things that The Powerpuff Girls taught us about fighting crime, trying to save the world, and moderate feminism.

1. Boasting a false sense of equality is both harmful to the larger cause and promotes misconceptions on how feminists are viewed to the general public.

Femme Fatale, an early villain from the episode "Equal Fights" is an odd parody of a "feminist," but a necessary one. She commits bank robberies stealing only Susan B. Anthony coins, and demands to be set free by the Powerpuffs on grounds of inequality for the sexes. Confused, they DO let her go. After a talk with the wonderful Ms. Bellum and the woman of Townsville, the girl realize that Femme Fatale is NOT looking out for her fellow women, and furthermore had no concept of what equality of the sexes truly meant.

Blossom, Bubbles, and Buttercup educated her on Anthony's true backstory with this speech:

"In 1872, she broke the law by voting. And even though she was found guilty, the feds wanted to go easy on her-because she was a girl!-and not send her to jail. Susan B. Anthony didn’t want special treatment. She wanted to be treated equally. She demanded that she be sent to jail, just like any man who broke the law. And that’s exactly what we’re gonna do to you."

2. Ageism is real, but it shouldn't hold you back from doing incredible things and proving naysayers wrong.

How weird was it that the Powerpuffs were all kindergartners, hence the need to fight crime before bedtime? Yet despite their position as little children, little girls no less, they took up that challenge every day.

I don't know if Tavi Gevinson ever watched The Powerpuff Girls, but I wouldn't doubt if she zapped all of her prodigy prowess from that show alone.

3. Implementing proper gender pronouns is an important sign of respect that all beings deserve by basis of their personhood.

HIM is quite possibly my favorite super villain of all time, basically existing as part Dr. Frank-N-Furter, part Satan (or maybe he WAS Satan? they were maybe unclear about that). Within this persona, he exhibited some stereotypically feminine traits, like the thigh-high stiletto boots, the black lipstick, and what seems to be a fluffy pink collar around his magnificent neck. However, let's take a second to appreciate that he was always called by the preferred pronoun of "him," meaning that the Powerpuffs respected his androgynous fashion choices as much as they feared his razor-sharp lobster claws. That's really big of them.

4. You will never get by without being an ally to women, as single-minded selfish pursuits of power don't benefit your gender or society in the slightest.

Nobody sucked harder than the Princess. Seriously.

5. Being a good leader means being willing to accept that you may do things that'll make you unpopular.

6. Jealousy and competition between women is senseless and self-defeating, in the end we all have our own unique traits to offer.

Remember the episode when Blossom got ice breath and flaunted it nonstop? And Bubbles and Buttercup were all pissy about it? To be fair, there were times when Blossom displayed her newfound gift arrogantly, and that led the other two Powerpuffs to boycott the ice breath. However, that almost led to the destruction of Townsville, and seriously? It's just immature. The Powerpuffs worked best because their skills and personality types complimented one another. They should've focused on how their collective powers worked together, and how each one of them had some truly special talents. Like Bubbles' ability to speak Spanish!