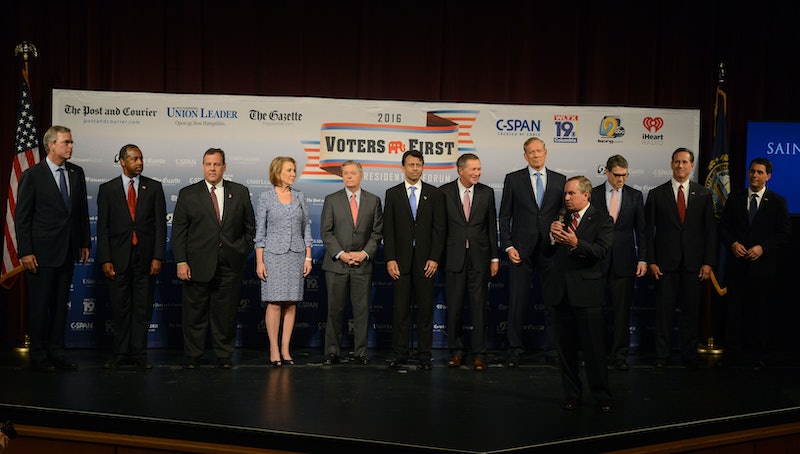 The Republican Party struggles with race. Even as its members begin to reluctantly admit that maybe, perhaps, black men and women are being killed in this country at alarming rates, many of its constituents have no desire to attribute incidents like the Charleston church shooting to racism. They don't want to say that black lives matter without saying all lives matter. Many are opposed to affirmative action and are firmly in favor of "securing the border." The underlying problem is that the Republican Party as an institution — which means that while not all Republicans might feel this way, it is a systemic issue — simply does not want to see race or understand why it is significant. This brings us to the curious case of Ben Carson and Bobby Jindal, two men of color who are running for the Republican presidential nomination.

By no means does Carson pretend that race does not exist. Following the Charleston shooting, he shot back at his fellow GOP candidates, calling them out for refusing to refer to the incident as a symptom of racism.

Let’s call this sickness what it is, so we can get on with the healing. There are people who are claiming that they can lead this country who dare not call this tragedy an act of racism, a hate crime, for fear of offending a particular segment of the electorate.

However, while Carson certainly recognizes the existence of institutional racism, he would rather that it didn't play as significant a role in American society as it currently does. In a 2014 essay in The Washington Times, Carson argued for the implementation of "compassionate action," which would give greater consideration to candidates for higher education or employment on the basis of life circumstances rather than race. As recently as Sunday, he dismissed the Black Lives Matter movement as "divisive," describing the outrage directed toward Democratic candidates Bernie Sanders and Martin O'Malley following Netroots Nation as "silly" and "political correctness going amuck." Additionally, last fall, he accused President Obama of "playing the race card" and portraying "minorities" as victims.

And then we have Bobby Jindal, who acts like he'd rather be white and does everything in his power to come off as such. Jindal blames racial inequality on minorities' unwillingness or failure to "assimilate," saying that we cling too closely to our heritages and that's why we are unsuccessful. The sad thing is that the very thing that Jindal stubbornly refuses to see — the prevalent nature of structural racism — is what pushes him toward feigned whiteness. It is difficult for South Asians and other marginalized folks to succeed in the American political sphere, so it is no surprise that he — along with South Carolina Gov. Nikki Haley — choose to wear the masks that they do.

Jindal loves talking about the "American melting pot" and criticizing identity politics — and of course, he's only "tanned," not brown. I'm a firm believer in letting people identify the way they wish. However, as he is a public figure, Jindal's complete dismissal of the diverse backgrounds of people of color is not only offensive, but also a privilege. It is Jindal's right to distance himself from his background, but he can't criticize the rest of us for refusing to assimilate into whiteness, an institution that systemically oppresses us.

An essay in The Economist insisted that Carson's recognition of racism might finally resonate with other conservatives because he is staunchly conservative himself. But is Carson actually a voice of reason in the Republican Party? We've arrived at a tricky situation here. Carson can either work to dismantle the Republican Party's structural racism from within, or he can oppose it without. When presented alongside Jindal as the only other person of color running for the Republican nomination, he seems to be a better option. But does his recognition of structural racism actually accomplish anything when he's also in favor of dismantling programs like affirmative action that try to combat it? Carson said he thinks the electoral tide is turning, that black voters are "waking up" to the Republican Party's aims. But he seems to think that this is the result of leaning toward colorblindness, rather than inclusion.

Carson does not have Jindal's race problem. He is not trying to be white. He is not pretending that racism is the fault of those who are marginalized. In many ways, he serves as a foil to Jindal on the issue of race. But that only makes sense insofar as he is calling out the Republican Party's unwillingness to acknowledge the existence of racism — Jindal, meanwhile, thought that the Charleston shooting was symptomatic of a "police matter." Carson's op-ed at that time, in which he tackled the issue of racism as something institutional, not isolated, was admittedly important. Would going any further — by supporting BLM, by supporting affirmative action, by not being so quick to dismiss "political correctness" — make Carson a liberal? Of course not, because he still holds far-right views on abortion and the Middle East, among other things, but it is possible that Carson is getting at something that many in the GOP are still failing to grasp.

It is Carson's lived experience that provides him with the privilege to speak as he does. He was once a source of inspiration for black youth in particular — and in many ways, he still is — as an example of the upward mobility upon which the Republican Party prides itself. But as Vox so astutely pointed out, his audience has changed over the years even if his life story has not. In this way, Carson is incredibly similar to Jindal; for these men, their success as individuals seems to overpower the prevalence of racism in the political sphere. They are supposed to be success stories of the Republican Party, proof that marginalized folks don't need to perceive themselves as "victims," that brown and black people can succeed.

But no matter what their childhoods looked like, no matter how they accomplished all that they have during their lives, they cannot explain away the disadvantages that people of color still face economically, politically, and socially. Carson is wrong; economic growth is not colorblind, and making such an argument is evidence of a refusal to understand inequality in an intersectional way. Individual people of color can certainly succeed, and I am cognizant of my privilege as a woman of color from a comfortable Silicon Valley home who was lucky to be able to pursue the field I so desperately longed to. But individual success, like that of Carson or Jindal, does not negate the existence of institutional factors that result in things like the increasing militarization of the U.S.-Mexico border, police brutality, mass incarceration, voter ID laws, the wage gap between white folks and people of color, discrepancies in media representation, and the Ku Klux Klan's ability to continue protesting.

Jindal is kidding himself if he thinks that racism only rears its head "from time to time." It is ever-present, and it intersects with misogyny and classism and transphobia and many other forms of oppression in dangerous ways. For us to ignore it entirely, in favor of pointing out success stories like Carson's or Jindal's, would be a disservice to every person who has felt the violence of this system.