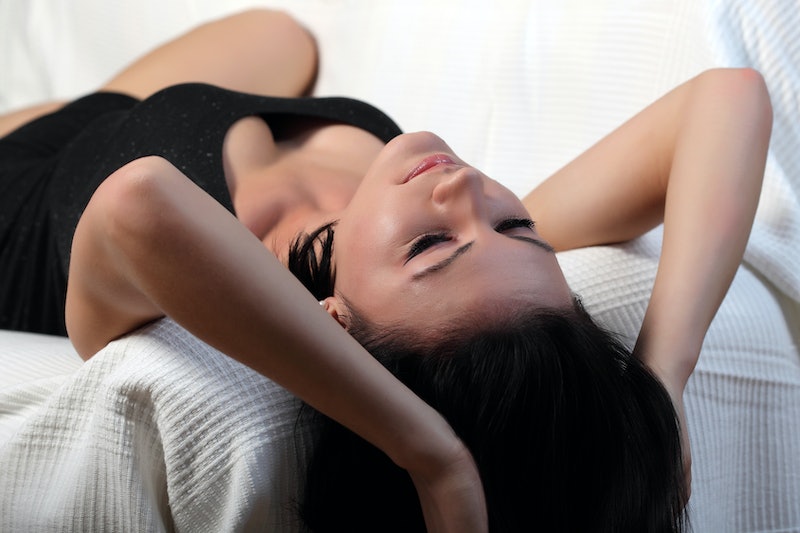 Sex can be dangerous business. In theory, getting it on in the shower might sound like a great idea, but then, before you know it, both you and your partner are on the floor of the tub, yelping in pain. It's true: sex injuries do happen, and if you’ve yet to experience one yourself, you’re very lucky.

But while falling on your ass is definitely a risk you run when you decide to have shower sexy times, it’s not the most common of the sex injuries. In other words, it can totally be avoided, but other injuries aren’t so easy to get around. In fact, a third of people have admitted to being injured during just basic, run of the mill, sex moves and positions. Instead of having the mind blowing orgasm you’ve been craving all day, you end up in the ER trying to explain to the on-call doctor exactly why you’re there. It can be awkward and, depending on your threshold for TMI, scarring.

While horror stories will like us to believe that sex injuries usually involve a broken penis, the reality is that that’s not as common as urban legends make it seem. The most common sex injuries are the ones where nothing is actually broken, but OMG, can still hurt like hell.

Here are five really common sex injuries and how to heal them right up.

The most common of all the sex injuries is vaginal tearing. Why? Because lube, you guys, you need to use it! Even for a woman, who has zero problem with lubrication when she’s aroused, vigorous sex can really dry things up down there, resulting in some tearing of the labia, vulva, or the inside, too. Not fun.

How To Heal It: The best way to heal this doozy of a sex injury is, first of all, stop the second you feel any pain or irritation. Then, give it time. Your vagina has some superhuman healing powers to keep itself happy and healthy, so trust that it will take care of itself. But if there’s excessive bleeding or the pain persists, then you should hit up your gynecologist.

According to a 2010 study done in the U.K., one of the the most common sex injuries involve pulled muscles which, of course, makes sense. When we’re aroused, the oxytocin is pumping, and because of that our tolerance for pain is increased. You can be totally pulling a muscle mid-sex and not even realize it until afterward as you hobble around calling out, “Why me?!”

How To Treat It: Take an over-the-counter nonsteroidal anti-inflammatory drug like ibuprofen. Also, applying a cold compress will help with the swelling. If it doesn't feel better in a few days or gets worse, then you should probably see a doctor.

Whether it’s a condom or something you and your partner decided would make for the ultimate penetration toy, sometimes things get “lost.” Not only do women deal with this potential hazard, but so do guys. According to Dr. Billy Goldberg, an assistant professor of emergency medicine at NYU School of Medicine, he's definitely seen his fair share of “foreign objects” in the rectum, too.

How To Heal It: Breathe. You have to figure, if you could get something in there, you should be able to get it out. It might seem lost, but it’s not like your body is an endless sea, just sucking up things and keeping them forever. If you wait a good 10 to 15 minutes, you body will relax and it will be easier to fish around in there and retrieve the item that has gone MIA. If you just can’t, then you need to call your doctor as soon as possible. Whatever you do, don’t use anything other than your fingers to try to get the missing item out. The last thing you need is adding to your collection of things up there.

As people with vaginas, were more susceptible to infections than our male counterparts. I’m not talking about necessarily STIs, but UTIs, yeast infections, and the dreaded bacterial vaginosis, all of which can result from sex.

How To Heal It: See your doctor. While yeast infections can usually be treated with an over-the-counter medication, other infections may require antibiotics. There’s also the possibility that you’re dealing with an STI and, if that’s the case, you want to have that taken care of right away.

Although a mattress is probably the safest place to have sex, as far as surfaces go, sometimes the mood strikes and you just want to have sex on the carpet. It’s spontaneous! It’s fun! It’s sexy! It’s ― ouch! Carpet burns are just part of sexin’ on the floor, no matter if you’re on the top or the bottom.

How To Treat It: You want to apply cool water and antibacterial soap to the infected area. The cool water, as it does with any other type of burn, will make it feel better, and the antibacterial soap will fight off any bacteria that’s just dying to get in there and make a mess. The next step is to keep the burn covered with an antibiotic treatment, like Neosporin, as well as a bandage. As the burn heals, it’s important not to pick at it. You’ll not only slow up the healing process, but it could result in scarring.