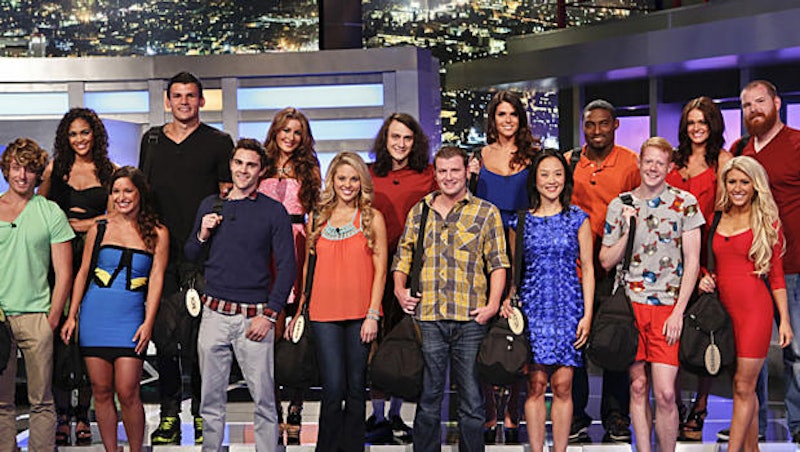 And so it begins -- another season of backstabbing, intense physical challenges, and mental brinksmanship. Or something? I've never actually seen this show before! As with so many of the shows I'm covering this summer for Bustle, Big Brother is one that somehow just sort of slipped through the cracks. (And that's even with colleagues Kate Ward and Aly Semigran exerting tremendous Twitter energy discussing it last summer, and always.) But now, one hour in, I can completely understand BB's weird appeal. It has nothing to do with any unique qualities or construction. It has everything to do with the perfect mix of CRAZY assembled in our 16-contestant lineup. Let's meet them!

"Don't mess with Texas!" Now that that's out of the way -- Aaryn's a college psychology major who "doesn't sleep with strange boys on the first night" and wears glasses, both of which are a major turn-on for David (we'll meet him in a second!). She lasted an impressive 3 hours in the popsicle hanging challenge. What else can we say?

What he's an entrepreneur of I can't say exactly, but based on the number of Spider-Man references he made in his intro, I'm guessing it has something to do with web shooters and/or stand-up comedy. He's got sort of a self-deprecating vibe that at least one of the female housemates, Amanda, finds irresistible.

One of the best reality contestant types is "Type-A with a secret about their job," because that secret is usually nowhere near as interesting or meaningful as they hope it will be. Jeff Kent, on Survivor, imagined that his perceived wealth drawn from professional baseball would send him home. Will your career as a Chicago politico affect your chances of winning Big Brother, Helen? You're with a pizza boy, a lifeguard, and "unemployed." I don't think they'd know what you did even if you told them.

A self-styled "strategist" who will "lie, cheat, steal, backstab, whatever," Spencer does NOT like Ginamarie (me either, buddy!) and finds time to establish a three-dude alliance on the first night in the house. Could he be a contender? Railroad conducting honestly does not seem like the easiest of jobs; I give him a fair shot here.

Primarily concerned about what the show's challenges might do to his hair and/or pecs, David doesn't seem like the kind of guy who will last too long in the house. Then again super-chill is probably the number one most important quality to have in a 90-day lockdown situation with 15 other potential psychotics. Like you told us upfront, David, "life's a party. Live it. Get a super-good tan."

Elissa's sister, Rachel, actually won her own recent season of Big Brother. Did you miss that info? Don't worry, it will be repeated ten more times throughout the episode and probably again on Sunday, Tuesday, and next Wednesday. Little Sis is a yoga instructor certified "around the world" whose secret weapon is a vision board. She's going to be fun!

Far be it for me to criticize or call into question anyone's job description, but Andy's vocation is public speaking, which strikes me as more teacher terrain? Anyway Kaitlin (see below) is very pumped to embark on a lusty "gaymance" with her favorite prof.

Kaitlin is very pumped to embark on a gaymance with Andy.

Can you say WILD CARD? For starters, no one thinks he's a pizza boy. In fact, Amanda thinks he "gives off some sort of a genius aura" that is seconded by at least two other people. After that, we should note that 1) he brought a ton of hats with him and 2) he won the first challenge handily, with the sort of casual determination that makes you wonder what kind of survival bunker he grew up in. Of course we should have known right from his video introduction: "I am a clown…but I'm here for business."

Lady's LOUD. She's the friend you tell everyone is "a ton of fun!" until you can't stand her anymore and begin to call "just unthinkingly rude, you know?"

"Look at these arms," Howard commands us toward the end of the episode. "I can hold onto a popsicle as long as I want!" And how! Widely acknowledged as the most muscular of the bunch, Howard is a man of deep religious conviction nevertheless here to "win at all costs." Ginamarie, we should note, loves feeling his body.

Don't hate Jessie because she's beautiful. No really, don't -- she's had problems with that in the past, with other women. They're intimidated by her looks! Jessie finds her way to the boys tout suite.

Like Dave on Happy Endings (RIP), Jeremy wants you to know just how deeply connected to his Cherokee side he is. How much? "I really embrace my Cherokee side." As with most members of the Cherokee tribe, Jeremy lives on a 25 foot boat that makes the Brother house, a human prison without clocks or sunlight, feel spacious. If you were wondering who he thinks is the hottest lady in the house, it's Kaitlin.

Amanda is a real estate agent.

Candice is a pediatric speech therapist.

Always, always end with the redneck! When Judd isn't cooking squirrel in the woods with his buddies he's talking about how much he'd love to meet a Staten Island girl. And wouldn't you know it -- producers found one for him! "Here's to a wild and crazy summer" he toasts the house.

And there you have it -- 16 housemates (15 by next Wednesday) who will be spending the summer in a small, enclosed space. Which, sure, could mean the Brother house. But I'm really talking about our hearts. Welcome home, everyone.

More like this
Did You Notice Rylan Clark’s 'Big Brother' Reboot Hint?
By El Hunt
Scott Disick’s First Time Around Kravis Was “Awkward,” To Say The Least
By Jake Viswanath
Everything We Know About Chèrie & Jessey’s Abrupt Exit From Bling Empire
By Alyssa Lapid
Stormi Just Walked A Red Carpet With Mommy Kylie Jenner & Daddy Travis Scott
By Hugh McIntyre
Get Even More From Bustle — Sign Up For The Newsletter