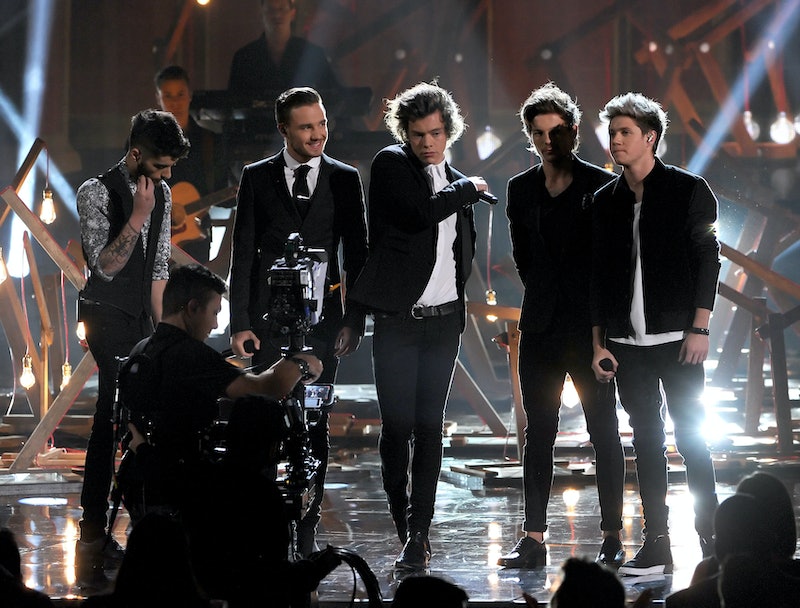 Last night on Saturday Night Live, Paul Rudd parodied One Direction fans for good reason, those (mostly girls) are full of comedic fodder. But other times, they're just downright scary in their love for the boy band. And I would know. On Friday I ran into a group of dedicated fans waiting outside The London Hotel in New York City. Despite a persistent drizzle and frigid temperatures, these girls (and a couple of adult women who I don't think were any of the girls' mothers) had already been waiting in line for six hours hoping to catch sight of the band members entering or exiting the hotel.

As I walked past the group, I did what most New Yorkers do when they see people waiting in a line, and asked: "What are you waiting for?" hoping I might have stumbled onto the next cronut, or it-club, or Brad Pitt premiere. When I asked, the girls answered in a squeal, "One Direction!" and proceeded to explain that while the band was in Queens at the moment, they were waiting dutifully for them to return. I decided against asking how it was they knew where the band was, mostly because those fans always know weird things like which member is 1/16 Belgian and stuff. (It's Louis Tomlinson, if you care.)

But if any of them were hoping to catch a glimpse of fan favorite Harry Styles, they were out of luck as the singer spent most of Friday at rumored-GF Kendall Jenner's hotel, rather than his own. This was probably best for her, as I did hear the young Jenner daughter's name being not-so-nicely tossed around by the waiting fans. One girl said proudly that she'd "throw coffee on her" if she dared to show her face. And another young fan said she'd "get her gun out." (Yikes!)

I scampered out of there before I became a witness to a grisly murder in the name of teenage passion, and thought about how lucky Styles' ex Taylor Swift is. She didn't get mauled by an angry fan, and she got some hit singles out of her brief relationship with the One Direction member. Now that's romance done right.

More like this
Kendall Jenner & Devin Booker Reportedly Broke Up After 2 Years Of Dating
By Jordyn Tilchen
Zooey Deschanel Can't Be Anyone But Herself
By Samantha Leach
Kanye Joked About His Divorce To Kim K In A Surprise Speech At The BET Awards
By Alyssa Lapid
What Is Ariana Grande's Net Worth? When It Comes To Money, She Has No “Problem”
By Hugh McIntyre
Get Even More From Bustle — Sign Up For The Newsletter