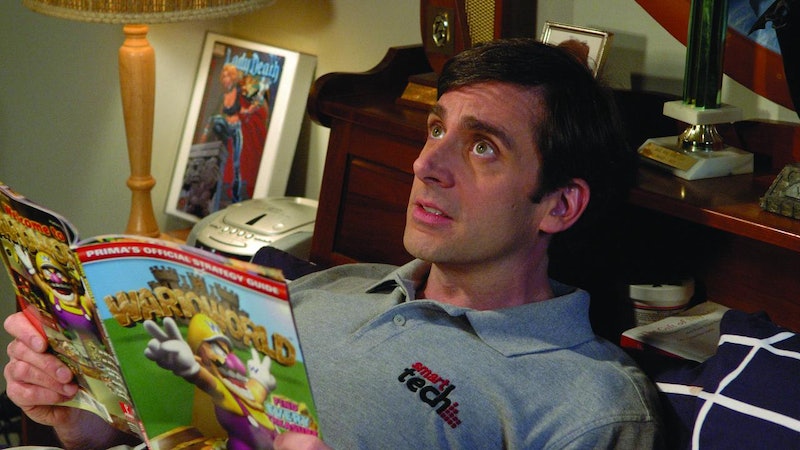 In the mid 2000s, the Judd Apatow train picked up speed, and the comedy world really hasn’t been the same since. With Apatow writing and/or producing megahits like Anchorman, Superbad, Knocked Up, Forgetting Sarah Marshall, and Talladega Nights: The Ballad of Ricky Bobby, Apatow has cemented his place in comedic history. But let’s go back to Apatow’s directorial debut: The 40-Year-Old Virgin , starring Steve Carrell as titular virgin Andy Stitzer. Now celebrating its tenth anniversary (I can’t believe it either), The 40-Year-Old Virgin was exemplary in the way that it combined gross-out comedy and a little bit of heart (which is now one of Apatow’s trademarks, by the way).

Apatow has a thing for working with his friends, and man, did this movie have a lot of them: Steve Carrell, Paul Rudd, Seth Rogen, Elizabeth Banks, Romany Malco, Leslie Mann (Apatow’s real-life wife), and Catherine Keener all starred in this funny flick. The 40-Year-Old Virgin was an instant hit, making over $20 million in its first weekend. I was in high school when the film came out, and it certainly was the movie of the summer with all of my friends. Instantly quotable, we all loved the stupid humor and seeing Steve Carrell on something that wasn’t The Daily Show. Now that I’m mostly an adult (at least, I try to be) and it’s been a decade since The 40-Year-Old Virgin was released, I wanted to see if the movie still held up. Here’s what I found:

The Movie Is Mostly Sex-Positive…

The one thing I can say about The 40-Year-Old Virgin is that it really explores sex in all forms — sex for sex’s sake, sex in love, sex as filler, etc. — so that’s a plus. It shows sex in every angle, which is important for detaching the stigma around it.

…But It Has Some Problems With Women

As a teen, I guess I didn’t pay attention to/care about the way the guys in the movie treated women. Watching it ten years later, I’m appalled by virtually all of it. The language (putting the p***y on a pedestal, etc.); the commodification; the underdeveloped lady characters — all of it. But I don’t think that Apatow has a problem with women in his other films.

Now this is a general complaint of a Judd Apatow movie. The 40-Year-Old Virgin could be 45-60 minutes shorter. During the “Andy gets dating tips and meets women” section of the movie, I found myself aching to fast forward (and I totally did). I’m not the most concise of people, but damn.

Andy’s Refrigerator Schedule Is The Stuff Of Dreams

Andy has a to-the-minute schedule of his day on his fridge. As a certified (I have the certificate) scheduler and creature of habit, I would love to be able to have every minute of every day down. Does that make me strange? Probably. But I don’t care.

There Are Some Now Well-Known Guest Stars

Of course, Steve Carrell and Paul Rudd were the big names in this movie, but maybe it just took a little longer for some of the other guest stars to get their names in lights. Mindy Kaling (as Paul Rudd’s ex-girlfriend) and Kevin Hart (as a disgruntled customer) both have bit parts in the film.

Does Speed Dating Even Happen Anymore?

Really, do people even do speed dating in 2015? I mean, in 2005, there were speed dates galore, but that’s because Internet dating was considered creepy. Now we have Match.com and Tinder and ChristianMingle and JDate and everything else, so we don’t really need to meet 20 people in an hour in one café.

The Lack Of Sensitive Language

The 40-Year-Old Virgin only came out ten years ago, which isn’t that long, but in those ten years major strides have been made for LGBT rights. I would hope that in 2015, the off-color remarks about the alleged transvestite hooker that the guys hire for Andy and the whole “know how I know you’re gay?” scene would get red-flagged in a second.

I have to say, I don’t love this movie as much as I used to. Give it a re-watch of your own and see what ten years has done for you.