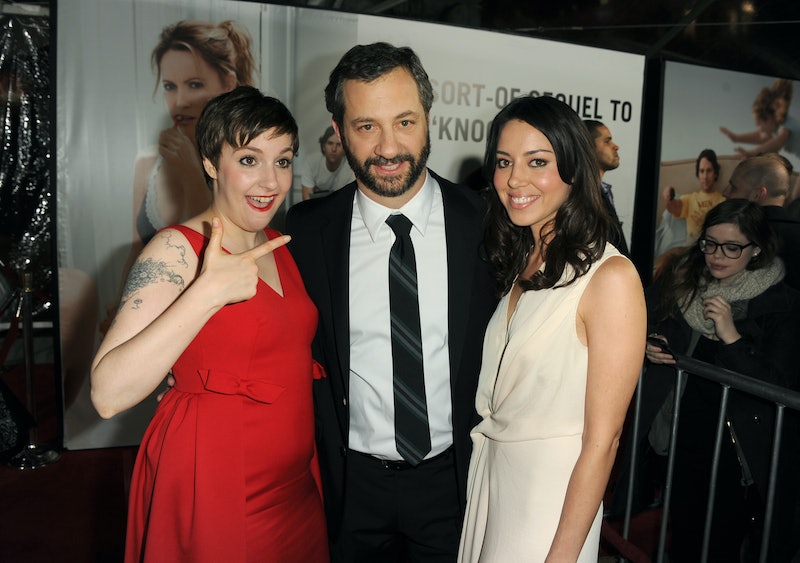 Approaching the tenth anniversary of its theatrical release, The 40-Year-Old Virgin leads a comfortable life as a basic cable mainstay. Funny and charming even after a decade’s worth of sleepy rewatches, the 2005 outing readily explains how director Judd Apatow has since become one of the most powerful names in contemporary comedy film. On the other hand, its particular brand of “bro humor” — stocked with a banquet of scenes in which men guffaw about sexual exploits, plus that old “You know how I know you’re gay?” shtick — does prompt a few questions about how Apatow has also become one of the most progressive names in contemporary comedy film.

Through and beyond his directorial work, today’s 47-year-old Apatow is an eager patron of the careers of feminist innovators like Lena Dunham and Amy Schumer: the star and writer of Apatow’s latest producing effort, Trainwreck . We see an especial stylistic kinship between the director’s debut and his newest picture. The two films are tighter, neater, and more aesthetically orthodox than anything of Apatow’s to hit theaters in the interim. These similarities aside, this year’s release feels less like a cousin and more like a descendant of the Steve Carell venture, evolved from a psychology that has become almost archaic over the past 10 years.

But this ideology didn’t begin to fade so soon after 40-Year-Old Virgin; in fact, Apatow’s patron sainthood of bro comedy wouldn’t reach the canon until after the release of his second installment, Knocked Up. In many ways, the 2007 film was the first feature to operate within the parameters of Apatow’s inimitable genus of mumblecore blockbuster. Chief among the onscreen antics that I recall from Knocked Up are indulgent rap sessions about the design and conquest of the female body. The movie isn’t exactly Entourage — but it certainly couldn't be confused for a feminist masterpiece.

In fact, in 2008 Knocked Up star Katherine Heigl spoke out what she called "sexist" representations of women in the film:

It was a little sexist ... It paints the women as shrews, as humorless and uptight, and it paints the men as lovable, goofy, fun-loving guys. It exaggerated the characters, and I had a hard time with it, on some days. I’m playing such a bitch; why is she being such a killjoy? Why is this how you’re portraying women? Ninety-eight percent of the time it was an amazing experience, but it was hard for me to love the movie.

The director never exactly validated his female lead’s castigation of Knocked Up's female characters. But in some regard, his more recent work certainly seems to indicate that critiques like this have affected him.

In Apatow's work as a writer and producer of Dunham’s Girls, his sponsorship of Paul Feig’s Bridesmaids, and perhaps most of all his big screen collaboration with Schumer, Apatow has striven toward the betterment of show business’ illustration and utilization of women. Even beyond his creative pursuits Apatow has leagued with the extermination of misogyny in Hollywood and America, growing particularly vociferous in the interest of exposing and condemning the crimes and criminal character of comic icon Bill Cosby.

It is difficult to compromise the image of Apatow, who is at one end a valued purveyor of some of today’s best female-led television and cinema, and at the other end the dude who introduced “You know how I know you’re gay?” into the dorm room lexicon. Even with this in mind, categorizing Apatow’s early work as “bro comedy” risks an undeserved conflation with the sort of sensibilities you’ll find packed into an episode of — and yes, I’m going back to that well — Entourage. All of Apatow’s writing distinguishes from this caliber of male-placating humor through an almost inarguably more benevolent intention, as well as the simple employment of nuance.

From the get-go, he was smarter and better than the world in which he was working. Hell, even his most regressive humor was cleverer than the bulk of comedy to hit the big screen in 2005 (granted, we’re talking about the year that gave us Deuce Bigalow: European Gigolo and The Dukes of Hazzard). But several years into his feature filmmaking career, Apatow caught up with own capabilities. In his next endeavor, Funny People, Apatow alleviated his relationship with raspy chortles in favor of mindfulness and sensitivity. His female lead, played by Mann, still wanted for the color expended to her male costars’ characters. Still, the project’s very form proved that Apatow was growing.

In 2011, he helped to bring the world Bridesmaids, a turn that would beget his fostering of Girls and partnership with Amy Schumer for what would become Trainwreck. As Apatow claims in a conversation with Schumer at Vanity Fair, Bridesmaids didn’t sprout from the grounds of social consciousness. He wanted to do good work, and Kristen Wiig was a person from whom good work seemed to flow. But he admits that it didn’t take long to recognize what Bridesmaids was outside of its vacuum. “There was almost zero follow-up in the culture,” he told Schumer, “in terms of funny movies that are dominated by women.”

Apatow lays this claim in 2015, watching all the while as his and Schumer’s Trainwreck drips into an all-important bucket. The writer, director, and producer has wrought quite a business exhuming latent regression since helming that charming if imperfect debut film, 40-Year-Old Virgin. He’s been asked to question his own ideological missteps via Katherine Heigl’s Knocked Up complaints, as well as those of the film industry following the dichotomous digestion of Bridesmaids.

Most recently, he applies this line of work to Trainwreck, teaming with Schumer to dismantle the romantic comedy’s “answer” to the question of female identity. Though the first of his features on which Apatow is not a screenwriter, the movie feels right at home in his filmography. It bears the tidy kinetics of 40-Year-Old Virgin, the naturalistic humor of Knocked Up, and the dramatic wealth of Funny People. What’s more, it benefits from the lessons Apatow has heeded off screen, from the growth he has endured not simply as a director. While showcasing plenty of what we’ve loved in Apatow lore, the movie concentrates on being a product of Apatow future.

So is it far enough a leap from the days of lackluster Heigl characters and “You know how I know you’re gay?” quips? Well, you may take issue with the film’s shockingly conventional closing set piece, or its own homoerotic comedy routine vis-à-vis supporting player John Cena. Maybe in 10 years, some of us will regret having championed Schumer’s character’s Hollywood ending, or laughing at Cena’s sexually charged wordplay. But by then, a 57-year-old Apatow might have something all the more enlightened on the horizon.

More like this
Alyson Stoner Says She Went To Rehab After Auditioning For 'The Hunger Games'
By Jake Viswanath
What Does The Presley Family Think Of 'Elvis'?
By Arya Roshanian
Chris Hemsworth Joked That Baring His Butt In ‘Thor: Love And Thunder’ Was A “Dream”
By Brad Witter
Photos Of The 'Elvis' Cast vs. Their IRL Counterparts Will Have You All Shook Up
By Grace Wehniainen
Get Even More From Bustle — Sign Up For The Newsletter