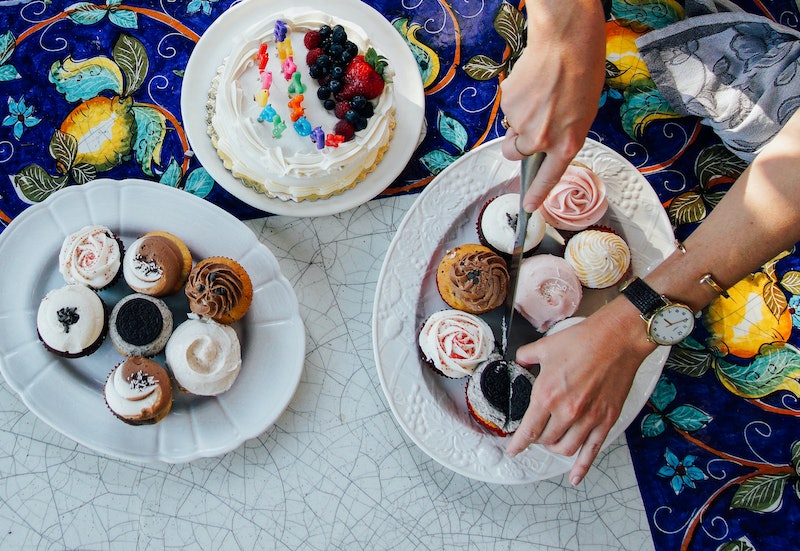 If you’ve ever participated in a discussion about weight, then you’ve undoubtedly heard the phrase “fast metabolism” tossed around like a friggin’ beach ball. People are generally super quick to attribute their weight issues to their metabolism, and folks who appear to be naturally thin often thank their fast metabolism for allowing them to subsist off of a diet of pizza, cheeseburgers, and margaritas without having to go out and buy bigger pants on a weekly basis. But is fast metabolism really genetic? And, if so, does that mean you could be doomed to lifelong weight struggles based on your metabolism?

The answers to these questions are a little more complicated than a simple yes or no. But, yes, a person’s metabolism (fast or slow) is something they’re born with. An individual’s metabolism is as specifically unique to them as their fingerprint. But whether your metabolism determines your size and your ability to lose or gain weight isn’t so cut and dry.

In fact, skinny people actually have a lower resting metabolism because there is simply less of them to burn while they're at rest. Also, while people who are born with fast metabolisms are often envied, (and even a little bit hated), having a fast metabolism isn’t always a good thing, because maintaining a healthy weight can be just as difficult as having a slow metabolism. Additionally, just because your metabolism is something you’re born, that with doesn’t mean it is incapable of change.

If you want to know how your metabolism works, (and how you can make it work for you) then read on. Here are three things you need to understand about your metabolism, whether it’s fast or not.

What Your Metabolism Actually Does

Your metabolism is essentially what keeps your body going, even when it's resting. Everything we eat and drink is broken down and converted into the energy that our bodies need to perform everything from the most basic of functions, (like breathing and building cells) to the higher energy stuff (like working out and having sex).

Metabolism is actually a two-part process: The part where your body breaks down what you eat and drink is called catabolism, and the part where what's been broken down is used to build cells and keep your body going is called anabolism. So, basically, metabolism is the process of transforming the calories we consume into the energy we need to do literally anything at all.

Why Metabolism Varies From Person To Person

Everyone has what is called a basal metabolic rate (BMR), which is how much energy your body burns while you are at rest. Your BMR (also called resting metabolic rate, or RMR) is partially hereditary and it's responsible for burning around 70 percent of the calories we burn each day. BMR determines how many calories our individual bodies need to perform their basic functions.

The more calories your body requires to keep you going, the faster your metabolism is going to be because you won't end up storing extra calories. So, if your body needs fewer calories to get it's jobs done, it's going to store your extra calories and cause you to have a slower metabolism. Additionally, since muscle increases your BMR, the more muscle mass you have, the more calories you're going to burn. Some people are born with more muscular body-types than others, and these people just naturally have faster metabolisms. This is why men usually have faster metabolisms than women.

How You Can (Somewhat) Control Your Metabolism

If you weren't born male, with an increased BMR, or you're just not that muscular, that doesn't mean you're doomed to struggle with weight gain. If you were born with an increased BMR, that doesn't mean you can't gain weight, either. Our weight is ultimately determined by how we balance our calorie intake with our energy output. If your metabolism is slow, you're likely taking in way more calories than your body is burning, and you just need to adjust your habits. To lose weight, you need to be burning more calories than you're consuming. Basically, you need to create an energy deficit in your body. (Easier said than done, I know.)

If you're underweight and want to put on a few pounds, you need to start consuming more calories than you're burning. Just make sure you're not upping your calorie intake solely with cupcakes and pizza, and don't stop exercising altogether. Just maybe do the elliptical for 20 minutes instead of 30.

Whatever kind of metabolism you were born with, all that really matters is that you stay healthy and take care of yourself. Listen to your body, and if you think the speed of your metabolism could be caused from something more serious than your exercise and/or diet routines, make an appointment with your doctor to rule out the possibility of any serious medical conditions as the culprit.