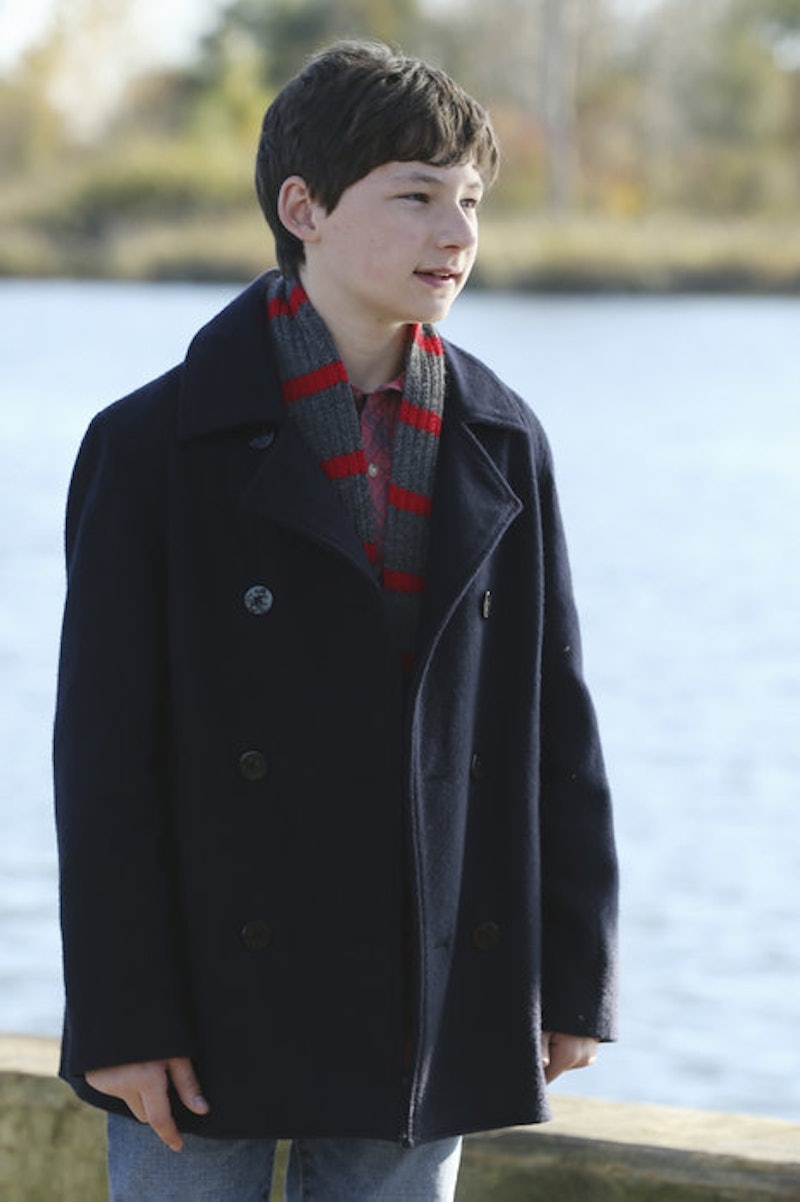 Finally, we're back in Storybrooke and all is well. Just kidding! ABC's Once Upon A Time finally returned to its port of origin on Sunday night's episode, but the battle against Peter Pan is just beginning. Last week, Rumpelstiltskin trapped Pan in Pandora's box and brought him back to Storybrooke, thinking that it would be the end of the villain formerly known as his papa. But the joke was on him when Pan pulled the ultimate switcheroo prior to getting trapped in the box: He swapped bodies with Henry. That pesky forever-child pulled the wool over everyone's eyes — at least for a little while.

On Sunday's episode, everyone realized that Henry wasn't actually Henry (thanks to Emma), but not before it was too late. Pan appealed to Regina's competitive side by feeding her exactly what her wounded ego needed so he could steal a very valuable weapon: the curse that created Storybrooke, which, if cast again, will allegedly erase everyone's memory and trap them in the town. Pan's brilliant plan? To cast the spell and turn quaint, little Storybrooke into the "New Neverland." The gang has to figure out not only how to keep that powerful curse falling into incredibly wrong hands, but also how they're going to swap Henry and Pan back into their correct bodies before they can either kill or imprison Pan and end his reign of terror once and for all. Clearly, as effective as Pandora's box is, it didn't succeed, so now Emma, Regina, and Rumpel need to put their magically-inclined brains together to come up with a new solution. But here are five better ways to imprison Pan, inspired by other movies and TV shows:

Trap Him In A Painting

It worked on Lifetime's The Witches of East End, and as long as Rumpel or Regina keep the painting in a safe place where Felix or any other magical being can't get to it, Pan will be trapped forever. Once they swap Henry and Pan back to their rightful bodies, a simple spell would ship Pan off to a previously painted destination, and he'd live out his eternity there. With no magic. We think a desert or the tundra would suit that little sociopath nicely.

Trap Him In An Hourglass

Remember when Jafar did this to Jasmine in Aladdin? Obviously, she escaped, but no one's going to help Pan get out. Even if Felix or one of the other Lost Boys tried to find and break open the hourglass, they wouldn't have the magic to return Pan back to life size. As long as our Once heroes keep Pan in a magically-protected place in Rumpel's shop or Regina's vault, problem solved.

Á la Katherine on The Vampire Diaries. I'm sure it wouldn't be hard for the all-powerful Dark One (Rumpel), Regina, and unknowingly powerful Emma to strip Pan of his powers and essentially make him human. It'd be really fun to watch Pan try to function as a normal human being, since he couldn't handle life as a grown man before. His actual age is also probably over 100, so he'd be bound to decompose and age rapidly like Katherine. And you know the last thing Pan likes is growing up.

Trap Him In A Magical Dungeon

Like the Titans, trapped by Zeus, in Disney's Hercules (a title character we've yet to see on OUAT ). Unfortunately for Zeus and his power, everything in Greek mythology is dictated by the planets' alignment, so the Titans were able to escape. Luckily for the characters on OUAT, they can learn from that issue and create a strong enough spell to trap Pan forever, possibly in that well everyone seems to be hanging out around at some point or another.

Turn Him To Stone

On Sunday night, Snow White's big plan to trap The Evil Queen was to get her to look into Medusa's eyes so that she'll turn to stone. We're sure there's a spell for that and we're definitely sure that between Regina, Emma, and Rumpel, they could pull this off just like the White Witch in The Chronicles of Narnia: The Lion, The Witch, And The Wardrobe. I'm sure someone could find a place for a life-sized statue of a boy who never wanted to grow up, and, if not, he can always hang out in a safe in Rumpel's shop (just for extra protection).

So, if this mishap with Pandora's box has the Storybrooke gang feeling dejected, at least there's plenty of other options they can explore when it comes to Pan's life imprisonment. Unless they want to just stab him with Rumpel's knife and take the easy way out. Obviously, we wouldn't complain.