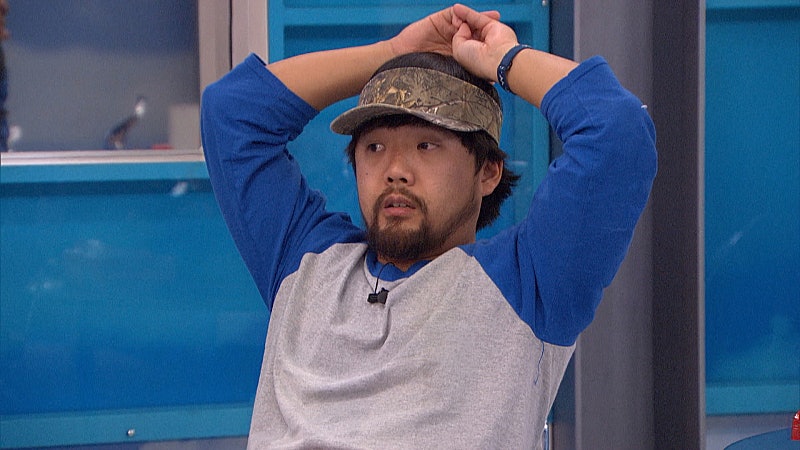 If, like me, you haven't quite accepted the fact that Clelli is no more on Big Brother 17 ever since Clay was evicted from the house during last Thursday night's episode, Sunday night's installment of the CBS reality competition would have put a smile the size of the state of Texas on your face. That's because we all hopped in a time machine back to five hours before Thursday night's eviction during Clelli's final moments in the house. However, if you were hoping to feel all warm and fuzzy inside, you're going to have to look somewhere else. That's because BB17 showed us an explosive fight between James and Clay that happened right before Thursday night's eviction, and it may have exposed an even bigger threat in the house.

Now this shouldn't have been totally unexpected. Clay went off on James after he put himself and Shelli up for eviction during last Sunday night's episode of Big Brother. Because James went back on his promise to not put Clay and Shelli up, Clay had felt betrayed by James, so the two hadn't been on the best of terms all week.

But we haven't seen anything like this on BB17 before. And floater Johnny Mac, of all people, started the whole thing.

Before Thursday's eviction, John and James were throwing a bit of shade behind Clay's back, saying how they didn't think it was cool that he was essentially giving up on the game for love. John then told Clay that he wasn't sure if voting him out was best for his game because Vanessa has been in Shelli's head and that she's more of the threat moving forward. After that, basically a huge, convoluted game of telephone took place. This got back to Vanessa who then told James that Clay had told her that James had told John all of this. Yeah, it was as confusing as it sounds.

James then decided to nip this whole thing in the bud and confront the "Big Bad Wolf," a.k.a. Clay, about it. When James came near Clay, Clay told him to "shut up." Soon, Clay was all up in James' face looking like the two were about to come to blows. Clay knew he was about to get evicted, so I suppose if he took a swing at James and got thrown out of the BB17 house a bit early, it wouldn't have mattered that much. However, it would have messed up James' adorable face, which would have been terrible, so thank goodness it didn't come to that.

The end was a bit anticlimactic. Nothing really happened except that James, Clay, Vanessa, and John all came together to get to the bottom of who said what, which they all eventually concluded was one big misunderstanding. When it was all over, Vanessa had no idea what actually happened and why she was dragged into it, and neither did I.

However, the real damage that was done was probably to Vanessa's game, actually. Her involvement in the fight and the fact that she blew it all out of proportion made her look incredibly paranoid and mistrusting to Clay, Shelli, and John, who all consider her to be an ally. They definitely had some second thoughts about her now. With her behavior in this drama, Vanessa definitely put a big target on her back, and now she better watch it moving forward. For more on all of the drama this season, check out Bustle's BB17 podcast, The Diary Room.

More like this
'Big Brother' Is Already Looking For New Houseguests To Compete In Season 25
By Brad Witter
What’s New On Netflix: Ana De Armas’ 'Blonde' & A Nick Kroll Special
By Arya Roshanian
Everything To Know About 'RHONJ' Season 13
By Brad Witter and Jake Viswanath
Everything To Know About 'RHOA' Season 15
By Gretchen Smail
Get Even More From Bustle — Sign Up For The Newsletter