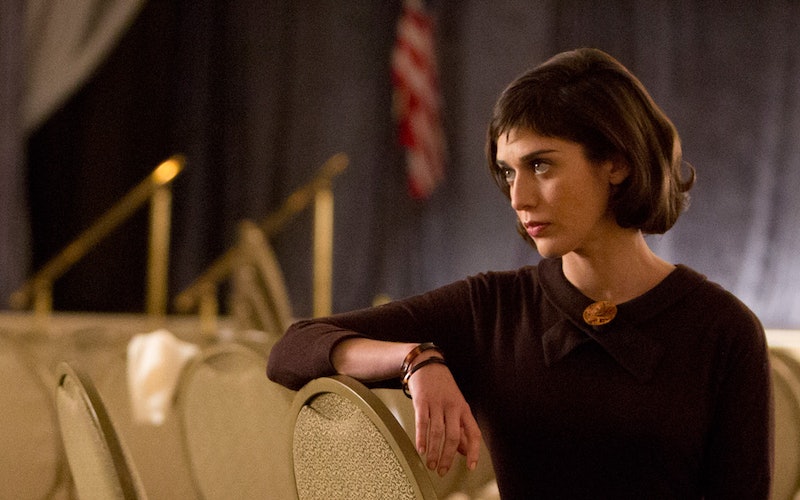 It's Antarctica for Masters and Johnson on Masters of Sex . Metaphorically. It's not a new phase of the study testing human responses to climate stimuli. Masters clearly needs his Girl Friday — who happens to now work just down the hall — but, you know, pride, anger, disappointment, all those feelings. And so he never asks for her. And Ethan Haas has gotten real charming — he always did have a jaw like George Clooney, or, to be time-period appropriate, Cary Grant.

And Dr. DePaul and Virginia are now one step past tolerating each other. There are jokes! About how keeping cocker spaniels alive is just like taking care of children.

What are you waiting for in St. Louis?

As is typical for penultimate episodes, everyone is waiting around. Ethan gets his send off party, but doesn't have anything solid lined up. Libby offers to help at Masters' office because, "There's nothing for me to do at home except wait for the stork."

What if the work is the true love?

Breaking with Hollywood conventions and delving into the realm of really ballsy characterization, Libby asks Masters: "What's on the other side of this?" while he is distractedly given dinner at home.

He discusses the work: more recognition means more participants, more money, and wider-reaching conclusions. Libby asks about the awards and headlines, which isn't what Masters cares about, but she doesn't quite register that. "When do you stop feeling like you've got something to prove?" she asks. "There's always something to prove," he responds, referencing the scientific use of proof.

She's just the mistress in this love triangle — and the third point is The Study, not Virginia.

And he conjures up Virginia throughout the episode as both an object of desire and also as a superego, telling him the he's being irresponsible with science. Oedipus complex much?

Where would all those women be if they didn't give up their careers for marriage?

Lillian DePaul and Virginia go to Knoxville on an arduous bus ride that breaks down. They end up missing the conference, but Virginia has the bright idea of talking to the wives of the doctors in attendance to convince them of the importance of routine pap smears to guard against cervical cancer. And, by golly, it works, and, turns out, most of the ladies worked for their husbands before marriage.

But before that, the unfairness between men and women is looming. DePaul asks Virginia if she'd be a man if she could: "Don't you ever feel betrayed by your anatomy?"

And, later on, DePaul confesses that she has advanced cervical cancer that has moved to her liver. "It was detected with a pap smear in my mid-20s," she says. "I'm not going to be around to see the testing becomes routine." She needs to pass off the work and looks to Virginia. And then she looks out the window, reminiscent of a corpse. Memento Mori, motherfucker. It's raining too.

Do people fall in love after having sex 23 times?

Libby is reading through files and it's titillating. One woman lost her virginity on the Staten Island Ferry (gross). Another woman first had intercourse at 43 but is multi-orgasmic (good for her).

One file, the largest, came in 23 times but had nothing to do with vibrating wand Ulysses — it centered on intercourse with one male study subject. The file is about Virginia, duh, but confidentiality and things.

Late one night, while Libby and Masters are in their two separate beds, Libby asks about the divorced woman who came in 23 times: "Did they know each other before the study?" she asks. "Twenty-three times. They must have fallen in love. Did they fall in love?"

And all Masters can says is: "I don't know. That's a question outside our area of inquiry." What is science good for?

When did Ethan get so darn charming?

When Ethan leaves Virginia's bed in the morning, she asks, "How do you like your eggs?" And just a few minutes after, he arrives back at her house, playing with her kids while she's serving scrambled eggs. Ethan offers to babysit so she can go on an overnight conference trip with DePaul to Knoxville and the kids cheer. It's really cute.

And when ex-husband George arrives in town while Ethan is babysitting, he's mean. He picks away at Ethan with quotes like, "We had this rhythm… we were a real team." But Ethan says impossibly upstanding things like, "You want to keep the title, George? You got it. All I want is the job."

And when Haas says he's going to ask Virginia to marry him and she'll say yes (a little cocky), George has nothing left to say except, "You'll never know the girl she was back then and that's my consolation prize." Daw.

So when will Virginia stop saying, "He's our friend, not a babysitter"? Well, when Ethan says to her in bed, that Haas and Johnson has a nice ring to it, that they'll be like Lewis and Clark. I guess we know that's not the end. No matter how much of all the drama is made up, the team is Masters and Johnson, after all.