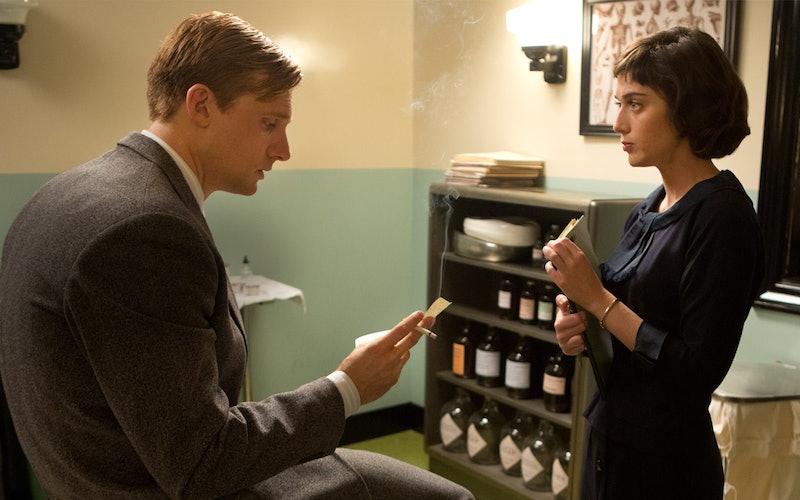 It's an air raid drill! And while most of the cast runs around pretending that it's a nuclear war on Sunday night's Masters of Sex , the real emotional drama really revs up. Bill Masters and Virginia Johnson are on the outs, but Virginia and Ethan are getting it in. Poor Libby is still pregnant but doesn't appear on the album. And there's that funny way in which personal matters in the episode become professional, too.

The episode brings up plenty of questions, and most of the characters' lives are up in the air. Its parting words? "Our sole consolation, it was just a test." So stay calm and carry on?

What are those "benefits" to being friends?

Ethan is getting all sweet and domestic with Virginia, trying to get "sleepover privileges." But apparently, sleeping with a research assistant isn't helpful when it comes to getting a full-time job at the university — Ethan is denied the gig. After confronting the Provost, and former future-father-in-law, he says that it wasn't him who blocked the transition from resident to full-blown-employee. It was Masters.

Would you rather have an unplanned pregnancy or get emotionally involved with someone other than your spouse?

Masters is pissed at Ethan, and wrote a nasty review to block his full-time employment, but why? Ethan is sure, at first, that it's because of his relationship with Virginia, but, after a huge punch in the face, Masters reveals that it's because Ethan had gotten Libby pregnant.

In other pregnancy news, a study participant got preggers during the study (once again, kids, contraception doesn't have a 100 percent success rate — diaphragms fail 6 percent of the time, the show says) with Langham. Masters is a jerk about it. Virginia is sweet. Eventually, she leaves with an envelope with $2,000 and not the baby daddy's name. Which is all to say, not enough.

Masters of Sex has been not only non-didactic about sex work, but humanizing to its participants. From episode one, sex workers portrayed in the show are smart, observant, and unafraid to say the things other people can't. They know more about human desire than most of the rest can even conceive of and that still holds true for the latest episode.

Margaret Scully is in the fancy bar again watching an old man chat with a pretty, younger lady. She knows it's a call girl and asks for tips in the bedroom. She gets a lot more when the girl asks what her husband is into and comes to the conclusion that, "No, sweetheart. He's a homosexual … you can't give your husband what he likes. He likes boys."

If the husband strays, does the wife always pay?

Margaret Scully plays parlor games with friends and they talk about a woman whose husband cheated on her and filed for divorced. And now, her daughter won't speak to her.

Elsewhere in the delicate world of it's-a-hard-knock-life for women: Dr. DePaul is also getting rebuffed for being indelicate at toeing the line between charming and sleazy as she tries to get the money she needs to fund her pap smear proposal. And of course… Virginia leaves Masters' study! (And becomes DePaul's secretary!)

More like this
Daryl McCormack On His Unusual First Audition With Emma Thompson
By Olivia-Anne Cleary
Dakota Johnson Reveals Why Filming Fifty Shades Was “A Battle”
By Rachel Mantock
Adele’s All-Female Lineup Includes Kacey Musgraves, Mahalia, & Self Esteem
By Shahed Ezaydi
6 Shows Like Stranger Things To Get Over Your Emotional Season 4 Hangover
By Kadin Burnett
Get Even More From Bustle — Sign Up For The Newsletter