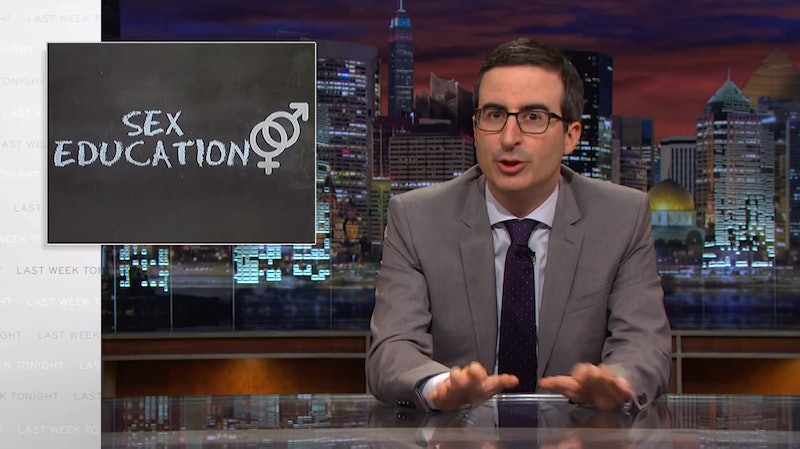 Amid all the election coverage and racial tension that's been dominating headlines is a frequently overlooked social issue that this country struggles with greatly: sex. Or, more specifically, sex education, which John Oliver refers to as "the conversation that animals in zoos refuse to let you not have." On Sunday night's episode of Last Week Tonight, Oliver revealed the flaws in America's sex education system, which lead to consequences that range from embarrassing (like not having skills in the bedroom) to very serious and dangerous (like sexual assault on college campuses).

Oliver opens his segment by illustrating why sex education might be lacking in America. Parents are outraged any time sex is taught with realistic detail. So instead of having real discussions about sex, schools have been showing awkward educational videos that make no sense (including one starring Breaking Bad's Jonathan Banks). But the main reason American teens (and many adults) are confused about sex is that the topic is not even taught in every state. In fact, as Oliver points out, only 22 states mandate sex education, and only 13 require the information to be "medically accurate."

Which is crazy. You wouldn't accept a history class not being historically accurate. Prince started the American Revolution in 1984 and his Purple Reign lasts until the present day. Class dismissed.

To make matters even more complicated, sex education curriculums vary vastly from state to state, district to district, and even school to school, so teens aren't getting the same information on the topic. The consequences of such an arbitrary system go beyond confusion, however, and can have a very serious impact. For example, according to Mississippi's sex education law, teachers can talk about contraceptives, but condom demonstrations in class are prohibited. That state ranks second in the country in terms of the number of teen pregnancies.

And just as disturbing? There are eight states that limit what teachers can say about homosexuality. And in Utah, teachers can't go into detail about the "intricacies of intercourse," because Utah Sen. John Valentine thinks that's a lesson that should be taught at home.

Taught in your home? Here's an exchange that has never happened: "How are you so good at sex?" "I was home schooled."

Yet another glaring aspect of our flawed sex ed system? Abstinence-only programs. Yup, programs that teach kids not to have sex entirely. Not only are they still being taught in many schools around the country, but Congress actually increased funding for these programs just this May. As antiquated as the concept might seem, Oliver wants to make it clear that abstinence is a healthy option that many teens will take, either by choice or, as he can attest, by circumstance.

But using motivational speakers to scare kids and "yell the horniness out of them" will only make them think that adulthood is nothing but an "endless barrage of unwanted dicks."

Incidentally, that was the original slogan for Tinder.

The point is that abstinence-only programs shouldn't be the only sex ed kids are receiving, especially when the rhetoric used to teach these programs devalues people, particularly women, who have had sex. Some programs have likened non-virgins to "used toothbrushes" or "chewed-up pieces of gum," or even "a dirty shoe." And this message -- that you're essentially ruined after sex -- is especially harmful for victims of sexual assault. And that brings us to the most significant, and dangerous, flaw in our sex ed programs: the subject of consent. Oliver points out that nearly half of the country's college students (not high school, but college) did not know what actually constituted consent. That is a problem.

Because sex is like boxing, if one of the parties didn’t agree to participate, the other one is committing a crime.

This fundamental and troubling lack of understanding fuels a campus culture in which sexual assault is disturbingly prevalent. In 2010, a group of fraternity brothers at Yale (Yale!) were caught on film marching and chanting, "No means yes! Yes means anal!" That is horrifying, and it's not an isolated incident, as countless reports have shown in recent years. And this hostile culture can be directly attributed to the lack of proper sex education kids receive in high school.By now, Oliver hopes you can see the myriad ways in which not having a strong sex education system hurts our kids, and society at large.

There is no way we'd allow any other academic program to consistently fail to prepare students for life after school, and human sexuality, unlike calculus, is something you actually need to know about for the rest of your life.

So if you live in a state with seriously lacking sex ed programs, Oliver has created the ultimate sex education video for you. And it stars some very familiar faces. Watch below.

More like this
TikTok's "Triangle Method" Technique Is The Key To Better Flirting
By Carolyn Steber
My Partner Wants Me To Wear A Diaper During Sex. Help!
By Sophia Benoit
12 Aphrodisiac Desserts To Spice Up Your Valentine’s Day
By Kaitlyn Wylde
Gen Z Are Twice As Likely To Identify As Queer, According To New Data
By Sam Ramsden
Get Even More From Bustle — Sign Up For The Newsletter
From hair trends to relationship advice, our daily newsletter has everything you need to sound like a person who’s on TikTok, even if you aren’t.