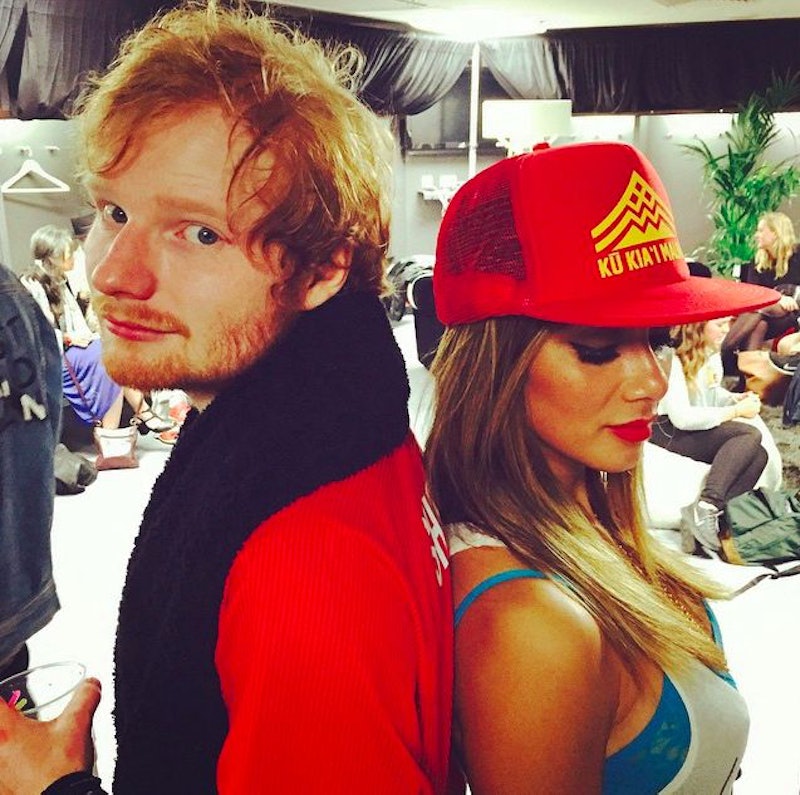 This is way too much for a Monday morning. My imaginary boyfriend Ed Sheeran is reportedly dating Nicole Scherzinger, if you believe the alleged ~friends~ of the couple who spilled the beans to The Sun. Though this unlikely relationship may take some time for me to process (besides their 13-year age difference, I'm supposed to be the only girl for Ed, OK?!), I'm actually kinda on board with the whole thing. Before I get too ahead of myself, however, it's only fair that I point out that Sheeran's rep did, in fact, deny to the paper that the pair's relationship was anything but platonic. So, considering the report is basically a "friends said, rep said" ordeal, it's only safe to conclude that the vocal powerhouses may or may not be dating. (So accurate, I know.) But here's the thing: Ed Sheeran and Nicole Scherzinger would actually work as a couple, so they should actually get to it.

According to The Sun, the two have already been on several dates together and Sheeran has been upfront about the sitch. "As far as he’s concerned they were in the early stages of dating and he’s been open about it with close friends and colleagues," a Sheeran pal told the paper. "It may not develop beyond those dates but they’re definitely tight." A few hangouts isn't exactly a commitment to anything serious and Sheeran's rep says that they aren't dating, but should it go the way of a relationship eventually, Ed Sheeran and Nicole Scherzinger would actually make a darn cute couple. Just listen to my pleas below.

1. There Is An Insane Amount Of Talent Between Them

I've essentially already outed myself as a giant Ed Sheeran stan in this post, but I mean it when I say that the man is a veritable genius at his craft. Not only is the redheaded singer an incredible lyricist and has a voice that will make your hair stand on end, the things he can do with a loop pedal are truly out of this world. And Nicole Scherzinger isn't one to be outshined either — remember that time she slayed Simon Cowell on X Factor with her voice? Jog your memory and check it out above, because Scherzinger blows him outta the damn water.

2. Their Ship Name Is Sheerzinger

And we all know that the couple who has the best combined name together, stays together.

3. She Played His Music On Repeat After Her Recent Breakup

In this case, Nicole Scherzinger is literally me, so I can only assume she ugly cried to "Photograph" and "U.N.I." Her "friend" told The Sun that Scherzinger "was drawn to [Sheeran] over the last few months through his music. When she split from Lewis [Hamilton], she was heartbroken but ended up playing Ed's songs on a loop."

4. And Dedicated A Song To Him In Concert

According to The Sun, Scherzy Scherz gave Sheeran a shoutout at her June 27 show in Hollywood, reportedly introducing her hit "Don't Cha" by saying, "This is for you, Ed." #Done.

Not that height is necessarily a deal-breaker in all relationships, but Ed Sheeran already revealed that it is for him. In fact, he explained that he would never date Taylor Swift because she's "too tall" and he feels like "we look like cast members of The Hobbit; she's like in the Elven Kingdom... and I've got hairy feet." He doesn't have this problem with Nicole Scherzinger, who literally tweeted a picture of them together saying that he is taller than she is.

A close friendship is a solid foundation to a romantic relationship, and it's clear that Sheeran and Scherzinger already have a tight-knit bond. "They’re extremely close," a friend of the X Factor judge told the paper. "Nicole says he is the male version of her."

7. And Ed Sheeran Has Apparently Written Lyrics For Her

Again, The Sun is the source of this information here, but asdfghjkl I WOULD LITERALLY DIE.

Sure, a 13-year age difference may seem like a lot by ~normal people~ standards, but everything's crazy different when you're famous. At 24, Ed Sheeran has already experienced the kind of career success most people hope to achieve at any point in their lives, so he's certainly on target with 37-year-old Scherzinger, who has the career success of The Pussycat Dolls and X Factor under her belt. Plus, the two are in the same industry, so they already have that in common. And ultimately, if they care about each other and have similar goals and visions in life, well, why let age stand in the way of that?