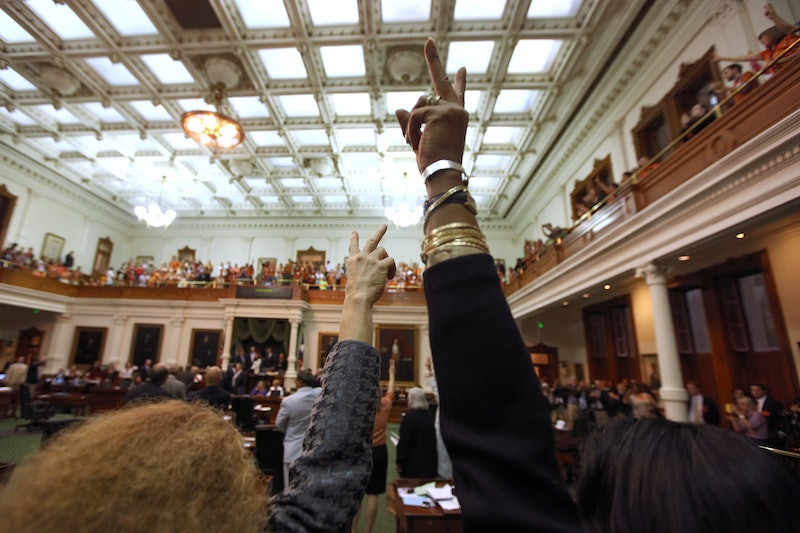 So, remember how Sen. Wendy Davis became an overnight sensation by succeeding in her filibuster attempt to kill Senate Bill 5? And everyone was so excited because it meant a huge victory for women's rights?

Well, Gov. Rick Perry has now officially announced a special legislative session on July 1 to vote on the issue again.

"I am calling the Legislature back into session because too much important work remains undone for the people of Texas," Perry said in a press statement on Wednesday. "We will not allow the breakdown of decorum and decency to prevent us from doing what the people of this state hired us to do."

At a press conference on Thursday, Perry also had some choice words for Sen. Davis. As “the daughter of a single woman” and a “teenage mother herself,” Perry said, “It is just unfortunate that she hasn’t learned from her own example that every life must be given a chance to realize its full potential and that every life matters.”

Davis quickly responded to Perry, saying “Rick Perry's statement is without dignity and tarnishes the office he holds.”

Perry has called for a special legislative session on Monday to pass the abortion bill.

The session will also revisit legislation over the mandatory life sentence with parole for a capital felony committed by a 17-year-old, as well as a bill to boost highway funding.

Although pro-choice groups have reiterated their support for Davis and other opposers of the bill, it'll be much harder to manage another filibuster attempt this time—the bill's supporters will make sure that this time the bill reaches the floor votes in both the House and Senate way before the session reaches its deadline. The bill would close 37 of the state's 42 abortion clinics, and ban abortion after 20 weeks of pregnancy.

In the statement, Gov. Rick Perry also mentioned that "Texans value life and want to protect women and the unborn."

Funny how that comment coincides with the state's 500th execution since 1982.