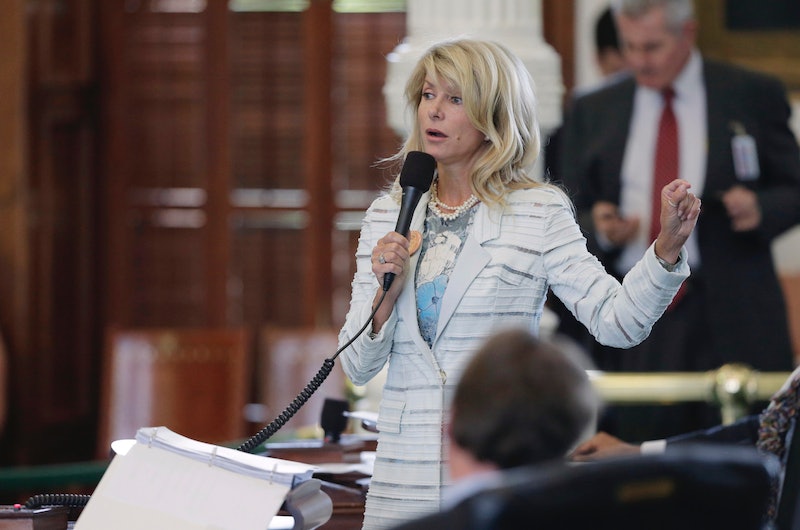 On Tuesday afternoon and night in Texas, one of the most inspiring things I have ever seen took place. And I'm not someone who is prone to exaggeration.

State Sen. Wendy Davis (D) began a filibuster at 11:18 am in order to kill the restrictive abortion bill, SB5, that the Senate was scheduled to vote on. The bill would have closed 37 of the state's 42 abortion clinics and banned abortion after 20 weeks of pregnancy. SB5 failed to pass in May during the regular term of legislative assembly, but Gov. Rick Perry convened a special 30-day session to allow its debate.

The filibuster was livestreamed by the Texas Tribune, and there were times when over 180,000 people were tuned in to watch. Astounding.

Davis had to speak continuously and stay on topic until midnight in order for the special session to end without SB5 getting voted on. She was not allowed to so much as lean on a desk for support — or eat, drink, or go to the bathroom, for that matter.

During Davis' 11 or so hours of speaking, she responded to challenges from pro-life peers, and read many of the thousands of stories and testimonials that poured in on Twitter when she asked her followers to share their positions on the bill.

Then, a few minutes after the clock struck 10 pm, Senate Republicans attempted to shut down the filibuster, arguing that Davis had received three strikes in violation of the Texas Senate's procedural rules for a filibuster.

Two of Davis' strikes were for germaneness, or failing to stay on topic, and one was for standing with assistance.

How did the determined senator stray from topic not once, but twice, you ask? Answer: She didn't. The two points she brought up that were ruled not relevant to the conversation were about Planned Parenthood's budget and a 2011 sonogram law Texas passed. Clearly, Planned Parenthood and sonograms have nothing to do with abortion.

And if this seems ridiculous, she received a second strike when a colleague helped her adjust a back brace. Here's footage of the moment:

And here's where three incredible moments went down.

First, demonstrating the power of the people, a Twitter user found a rule all of the Texas state Senators failed to catch. She tweeted the rule at Sen. Kirk Watson (D). Look what happened next.

Despite Heather's finding, Dewhurst attempted to take a roll call vote several times and continued to be interrupted by Democratic pro-choice senators.

The second moment came when state Sen. Leticia Van De Putte (D) addressed Dewhurst after the senator failed to recognize her for 15 minutes: "Mr. President, at what point must a female senator raise her voice in order to be heard above male colleagues in the Senate?"

Amazing. But even that was trumped by the night's most inspiring moment.

The crowd who had gathered in the gallery erupted in cheers at 11:45 pm. And did not stop. For 15 minutes.

Their cheers and noise prevented a vote from being taken as the floor devolved into chaos. A minute after midnight, Dewhurst attempted to complete the vote — after a day and night of using and abusing the Senate rulebook in an attempt to end the filibuster.

It didn't work. The crowd chanted "SHAME" while being forced out of fhe courtroom.

Although the AP initially reported the vote passed, later reports show it did not, and that the time stamp was the deciding factor.

And that is the story of how one woman, her peers, a local newspaper, and the people of Texas and Twitter won a humongous pro-choice, women's rights victory.

What's next for SB5? Well, Gov. Rick Perry can order another special session, again requiring a vote on the bill. In fact, Dewhurst's conceding words were, "It's been fun, but uh, see you soon." However, even though it could still ultimately pass into law, many believe the widespread attention it received means a monumental moral victory for women's rights in Texas.

Correction: An earlier version of this story stated that Sen. Davis shared the story of her own choice to get an abortion. That information was incorrect.