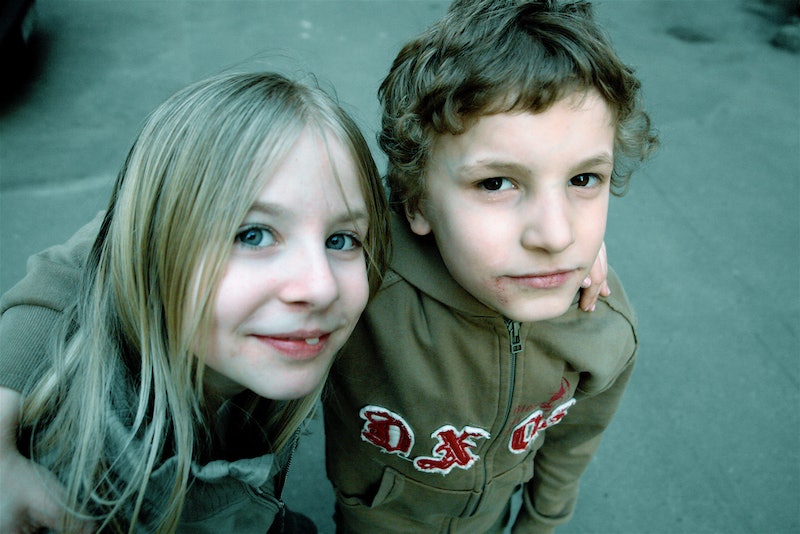 Having good clean fun on the playground is harder than it may seem. According to a new study, boys and girls as young as 11 feel pressured to go from "just friends" to "boyfriend-girlfriend." The study, led by Professor Emma Renold at Cardiff University in collaboration with the NSPCC, also found that children felt they had to conform to strict gender roles to fit in.

Researchers interviewed 125 children aged 10, 11, and 12 in this qualitative study looking at the sexualized environment pre-teens live in. This methodology was chosen to put children's voices and experiences at the forefront. "Because when it comes to sexuality," explained Professor Renold, "children’s views have either been absent, sidelined, ignored, sensationalized, or simplified in popular debate."

One boy who was interviewed explained how he pretended his best friend Alice was his cousin for an entire school year to avoid "heterosexual teasing." This teasing is part of a boyfriend-girlfriend culture that is almost impossible to ignore. Professor Renold explained:

Children are actively learning everyday about the contradictory and often confusing ways in which gender and sexuality shape who they are, how they feel in their bodies, what they can do, where they can go, how they relate to others and how others relate to them.

The majority of the children interviewed reported that being in a relationship elevated "social status and popularity," while being single spelled social exclusion. One boy said it was a "virtual rule" that "if you had a girlfriend you were marked out as cool, if you didn't you were a chav."

Being in a relationship helped elevate "social status and popularity," while being single spelled social exclusion.

The study also found that children feel pressured to fit into stereotypical gender roles. One girl said she wore heels to look older, and boys as young as 11 said they had started weight training. Both boys and girls reported conforming to gender roles in order to avoid peer pressure rather than simply look good.

Girls felt more pressure than boys to couple up — they talked about it as part of being a "normal girl"and "something you had to get used to." The study also found a sneaky double standard operates, where girls are "frigid" if they don't want a boyfriend and a "slut" if they talk about it.

Girls are "frigid" if they don't want a boyfriend and a "slut" if they talk about it.

So how do we take these findings and stop the playground pressures? Professor Renold says:

"It wouldn’t make sense just to address this risk by banning magazines advertising high heels for pre-teen girls or tightening up on the age laws of gym membership — it would involve a much broader intervention around physical safety and peer violence, as well as combatting gender and sexual stereotypes."

Contrary to what the media may tell us, many girls actually prefer wearing loose, comfortable clothing, argues Renold. Steph, age 12, summed it up: "If I don’t feel good about myself, the last thing I am going to do is draw attention to myself by wearing rude stuff." One of the girls in the study said, "I feel pushed to be a girl." Our sexist society still has a long way to go.

More like this
Here's How To Support Jewish People Amid Rising Antisemitism
By Hannah Orenstein
Emily Ratajkowski & Pete Davidson's Astrological Compatibility, Revealed
By Nina Kahn
These Are The 3 Most Mellow Zodiac Signs
By Kristine Fellizar
Are Capricorn & Aquarius Compatible In A Relationship? Astrologers Weigh In
By Kristine Fellizar
Get Even More From Bustle — Sign Up For The Newsletter