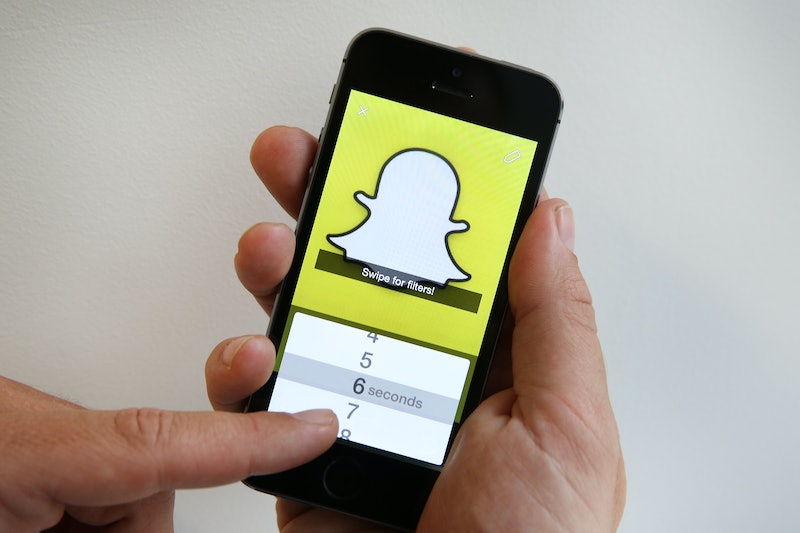 Along with selfies, tourist locations, and girls' nights out, many of your favorite politicians are now visible on Snapchat. And yes, the queen of millennials and social media, Hillary Clinton, has finally gotten a Snapchat as of Monday morning. Although the former secretary of state is still new to the app, her supporters can view 10 seconds of Clinton's life at a time on the campaign trail.

The campaign's live story features graphics, quick interviews with supporters, and updates on Clinton's travels. Her first snap on Monday featured an old photograph of Clinton and was captioned, "Hello, Snapchat," with the customary ghost emoji. She gave a speech on her plans to combat college debt on Monday, so the story contained clips of students talking about their personal college debts.

This move has been long anticipated. In June, Business Insider noted that the Snapchat usernames "Clinton2016," "Hillary2016," "Hillary4America," "Hillary4Prez," and "HillaryClinton" had all been taken, and messages sent to all of those names were marked as "pending," indicating that the accounts were still private.

The race to take over social media is a significant one among the candidates; especially the Democrats, who get so much of their backing from a younger generation. Martin O'Malley was the first Democratic presidential candidate to get a Snapchat, but the social network is only one facet of online popularity.

O'Malley has about 80,600 Twitter followers, which puts him well behind Clinton's 4.02 million and Bernie Sanders' 454,000. Clinton's Facebook page has 1.1 million likes, compared with Sanders' 1 million and O'Malley's 75,000. Clinton also blazes ahead of the competition with her 216,000 Instagram followers; O'Malley has only about 2,000. She even has a Pinterest account that has attracted about 5,000 followers. She utilizes it to post fun fashions, photos from her daughter's wedding, and inspirational quotes.

This isn't Clinton's first Snapchat experience. After her first political rally in New York, the live story "Hello, Hillary 2016" was visible to 100 million daily users, according to MSNBC. Analytics from comScore say that 71 percent of American Snapchat users are between the ages of 18 and 34, and 45 percent are 18 to 24, which is a valuable demographic.

We can't discount the powerful effect of social media. In a survey conducted by ORI and The George Washington Graduate School of Political Management, 29 percent of people said that social media was moderately to extremely influential on their opinions of the candidates and issues in the 2012 election. Approximately 40 percent said that they engaged in a political discussion on social media, and 19 percent made a contribution through Facebook.

With so many politicians wanting to take advantage of the demographic sweet spot Snapchat can offer, the platform has even devised a set of rules for political advertising that discourages negative ads and bans personal attack ads altogether. As more platforms such as Meerkat and Periscope become available for political engagement, social media can only get more important. Clinton probably had the right idea by joining the kids on Snapchat.

More like this
13 Selfie Instagram Caption Ideas That Exude Main Character Energy
By Jessica Booth and Emma Carey
Are John Legend & Kanye West Still Friends? The Singer’s Latest Update Is Candid
By Brad Witter
Rishi Sunak's Wife Is Worth More Than The Queen
By El Hunt
Samsung Just Dropped 2 New Foldable Smartphones
By Michelle Toglia
Get Even More From Bustle — Sign Up For The Newsletter