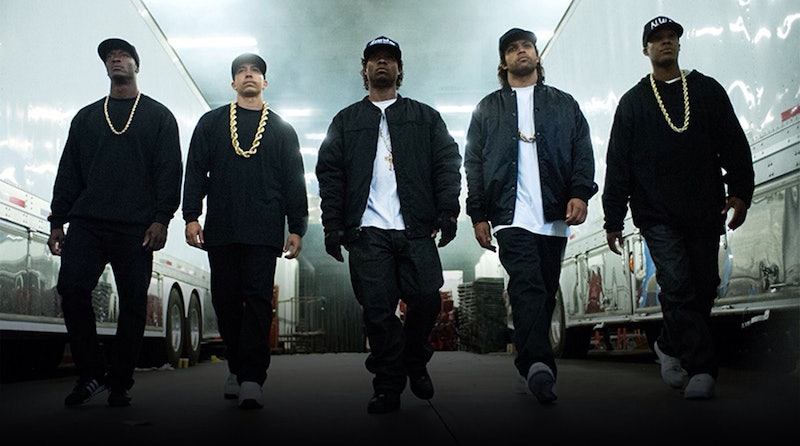 It's taken over six years for the N.W.A. biopic Straight Outta Compton to make its way to movie screens. But the legacy of the pioneering rap group itself is now almost three decades old. The film recounts N.W.A.'s game-changing contribution to hip-hop and to music in general, also dramatizing the internal and external struggles they faced. Original members Dr. Dre and Ice Cube serve as executive producers on the film, which is directed by film and music video helmer F. Gary Gray (Friday, Set It Off, The Italian Job). A young cast of mostly unknowns bring the young artists to life, including Ice Cube's son O'Shea Jackson, who portrays his own father. Besides Ice Cube and Dr. Dre, though, who were the N.W.A.?

If you're unfamiliar with the group, it's time you learned who they were. Straight Outta Compton will no doubt dig deep into the lives of its subjects and the street culture they made famous, but a little pre-moviegoing primer couldn't hurt. While the influence of N.W.A. lives on in all kinds of genres today, 30 years was a long time ago. So, for those who are too young to have lived through or remember the heyday of the group, here's a quick rundown of the artists you'll see represented in Straight Outta Compton.

Ice Cube's time in N.W.A. was short-lived; he parted ways with his colleagues in 1989 due to arguments over royalties. The rapper embarked on a successful solo career, built up an impressive acting resume, and is generally a bit of a Renaissance man. During his time with the group, Ice Cube (also born O'Shea Jackson) was regarded as its main lyricist and an urban poet.

N.W.A. began forming in earnest when Dr. Dre (born Andre Romelle Young) was introduced to Eazy-E. He'd made a name as a DJ previously, and recorded a few demos that made their way around town. But it was his experience in N.W.A. that led to his massive personal success. Another entrepreneur like his bandmate Ice Cube, Dr. Dre now runs a record label and the super-popular Beats Electronics.

Called Eric Lynn Wright when he began performing, he soon went by the name Eazy-E. Though in certain circles, he's also known as "The Godfather Of Gangsta Rap." Eazy-E's influence-blending, hyper-verbal style helped to define N.W.A.'s sound. As the film will no doubt show, a rift grew between the rapper and other members of the group; hatchets were buried very soon before Eazy-E's death at the age of 31 due to complications from AIDS.

D.J. Yella (Antoine Carraby) came into N.W.A. through Dr. Dre, as they'd both been a part of a club-dwelling electro group known as the World Class Wrecking Cru. His skills were primarily in producing; he helped to produce all three of the group's albums and Eazy-E's solo effort. After leaving a career in music, D.J. Yella threw himself into becoming a prolific producer of adult entertainment.

Born Lorenzo Jerald Patterson, M.C. Ren wasn't even finished with high school when he began working with Eazy-E. After impressing with the rhymes he wrote for Eazy-E's solo record, M.C. Ren was invited to join N.W.A. in time for their second album, Straight Outta Compton. He's still producing work as a solo artist and has an E.P. due out later this year.

Kim Renard Nazel has been known to go by Arabian Prince and Professor X. But it's the former stage name that was in use in his N.W.A. days. The performer left the group in 1988, allegedly because Ice Cube's presence made his unnecessary. As a solo artist, he took a long break between the end of his hip-hop work in the early '90s and a new electronic project in 2008, the date of his most recent release.

Find out more about these rap pioneers when Straight Outta Compton is released in theaters on Aug. 14.