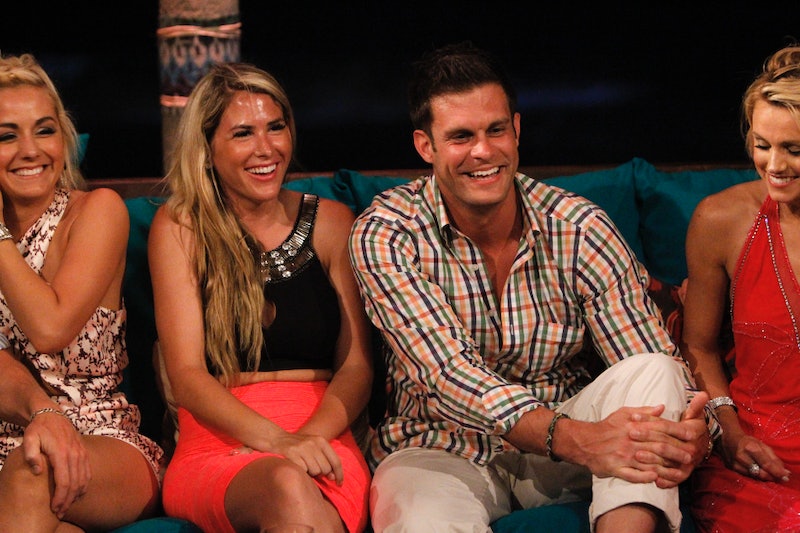 Oh, Joe Bailey. You were so sweet on The Bachelorette. You were such a southern gentleman to Kaitlyn. Where is that man? Did you leave him in America, because I have seen no sight of him since you ended up in Mexico — and especially not in this week's episode of Bachelor in Paradise. Since Joe arrived in Sunday night's episode, he's talked nonstop in interviews about how he's waiting for Samantha Steffen to appear in paradise... despite the fact that he's leading Juelia on. And when Jonathan and Mikey started realizing what was up, Joe wasted no time manipulating Juelia... and Jonathan... and Mikey.

It all started when Jonathan and Mikey both separately took Juelia aside to warn her that the guy she's falling for isn't as genuine as he seems. And when Joe caught wind of that? He immediately cornered both guys, and somehow, both men ended up walking away having apologized to Joe as he cackled about making them "his bitch."

He even made up his own hashtag for it: #JoeMadeHimHisBitch. Like, he spoke it out loud. That happened. Cue eyeroll.

I don't know if something went down off camera or if Joe has secret magical powers or what, but Jonathan was later found crying in the bathroom after having been confronted by Joe. Confronted by him, and then led to Juelia to confess to her that everything he'd said about Joe was a lie. Jonathan, are you OK? Can I assist you with your own hashtag suggestion, #JoeIsTheWorst?

And after that, Joe went right back to interview, proving that he did, in fact, lead Juelia on to "get that rose." UGH.