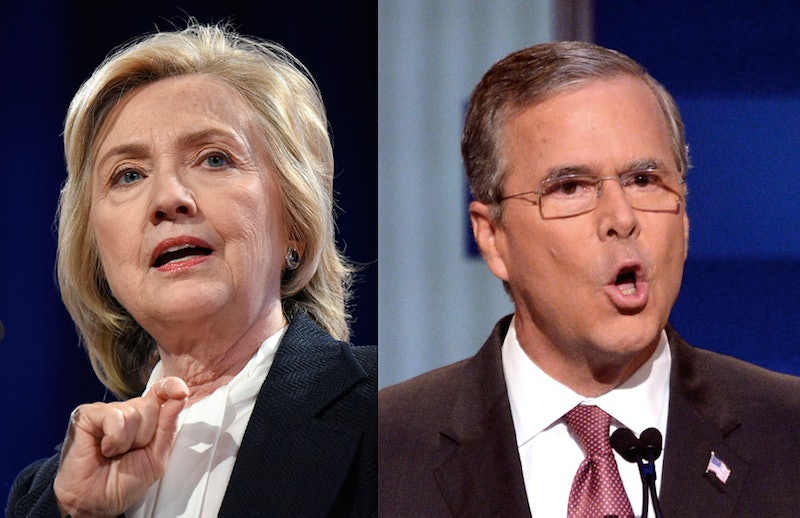 The road to the 2016 election has evolved into a technological throwdown, with candidates engaging in Web domain drama and Twitter tirades. Just last week, Hillary Clinton took a jab at Jeb Bush and criticized the Republican for questioning whether half a billion dollars should go toward women's health issues. In that battle, the Democratic front-runner tweeted just five pointed words at him: "You are absolutely, unequivocally wrong." But the latest episode in the political soap that is Hillary Clinton and Jeb Bush's Twitter feud has reduced grown adults into peddling juniors. A quick look at how it all went down Monday shows their Twitter accounts might be in desperate need of some parental controls.

Political campaigns have always felt a little grubby as candidates engage in personal mud-slinging and character assassination to woo voters. But no longer do we get simple TV attack ads in the final months leading up to the big election. These days, it's an ongoing showdown happening in real time online, and when social media comes into play, there's something a little infantilizing about the whole process. The latest barbs also included some pretty juvenile drawings, and trust me when I say no one strained any artistic muscles here. (Think Microsoft Paint, not Photoshop.)

The whole encounter, while somewhat sad, is also a little amusing. I mean, haven't we all been in some kind of Internet fight with a nemesis before? I mean, I did — when I was 14. Just take a look at the Twitter war. Politicians, they're just like us.

On Monday, Clinton debuted her higher education plan, known as the New College Compact, which aims to increase spending by $350 billion over 10 years to reduce student loan interest and make college more affordable. Her account tweeted a split graphic with the words "$1.2 trillion: The amount 40 million Americans owe in student debt." Just a couple hours later, Bush's Twitter mimicked the image but instead changed the words to "100%: The increase in student debt under this Democratic White House." It also accused Clinton of "mortgaging the future of college grads for 4 more years."

That's when Clinton's camp went tit-for-tat by reworking the graphic yet again and writing, "F: The grade given to Florida for college affordability under Jeb Bush's leadership." During Bush's eight-year tenure as governor, Florida's in-state college tuition jumped nearly 60 percent, according to PolitiFact. To be fair, college was expensive nationwide, and Florida's rate did sit below the national average of 75 percent. But Bush supported several policy changes that created a questionable education legacy, which included black enrollment in Florida universities dropping 11 percent from 2000 to 2013 after colleges were no longer allowed to consider race and ethnicity during admissions.

But that dig must have rubbed Bush's team the wrong way because the conversation quickly took a left turn — literally. Bush's account tweeted a remix of Clinton's heavily scrutinized campaign logo, which was rotated left to have the red arrow pointing up as lots of mini-"taxes" made up the two blue legs of Hillary's "H." The image, which implied her education plan would require a dramatic increase in taxes, was captioned, "Fixed your logo for you."

Yes, the election has been reduced to a pair of squabbling children trying to prove they're the best finger-painter in class. BuzzFeed's Samir Mezrahi probably summed it best when he "fixed" the candidates' Twitter bios: