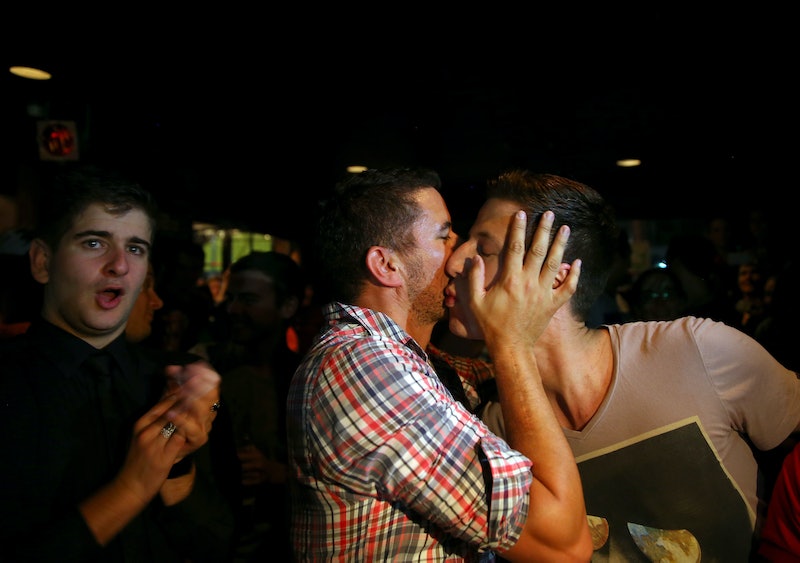 Though we're still waiting for Google to announce its top searches of 2013, a piece in the New York Times this weekend showed some results that probably won't make the top ten, but are certainly interesting. Harvard-trained economist Seth Stephens-Davidowitz looked at data about how the closet persists in American life, despite the advances of the gay rights movement. Specifically, he looked at men's self-identifications (versus their actions) on the internet. Operating under the assumption that about five percent of American men are predominantly gay (an assumption backed up by men's pornographic searches), Stephens-Davidowitz suggested that in many parts of the country, the closet is still a preferred option — and that wives are catching on.

Of course, if your closeted gay husband is stuck in a heterosexual marriage where his same-sex attractions eat him up every day, he's most likely depressed as well. But that's just splitting hairs.

In another one of his findings, Stephens-Davidowitz found that for every single out gay male high school student in Mississippi, there are 5.5 in Rhode Island. Meanwhile, fifty percent more Mississippi wives ask Google whether their husbands dig men than Rhode Island ones. Coincidence? Probably not.

Meanwhile, guess what's an even more popular search than "Is My Husband Gay?" Just type "Is My" into Google, and here's the first result:

Now that the news is out (pun intended), maybe Google will alter its algorithm to put the fears of Midwestern wives to bed. (Highly unlikely.) But conspiracy theorists say the search engine seems to have mysteriously blocked the word "gay" from coming up first when you type in, "Is [celebrity name] ..."

Maybe no one cares if Tom Cruise is gay anymore. But if there is some conspiracy afoot, that's really messed up — especially when you consider autofills like these still get to exist:

And that's just the tip of the sexist/homophobic/racist iceberg. Just check out this awesome Tumblr, "IgnoramUs."