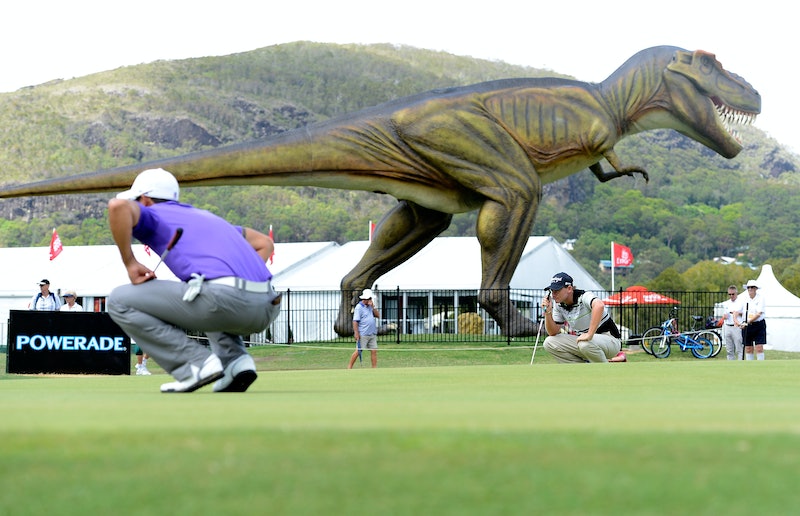 Guys. Guys. Don't tell anyone, but it's time you knew that most of the world's leaders are actually reptiles posing as humans. Like our sweet, smiling President Obama, who's also a member of the Illuminati, knows that dinosaurs still live on in Africa, and wasn't born in Hawaii. The guy has had the government shutdown planned for months. Swings by Area 51 on a monthly basis to stick needles in extraterrestrial creatures. Still owns a BlackBerry.

OK, one of those things is definitely true. But which one? Research indicates that conspiracy theorists don't tend to be crazy people with a fetish for aliens — just skeptics who disagree with the established narrative (and who sometimes also happen to be crazy.) Studies have linked conspiracy theories with a profound sense of distrust, and there's hardly ever been more distrust for the government than there is right now. Which means 2013 was a great year for conspiracy theories. We bring you three of our favorites.

There's actually a whole field of science named "cryptozoology," which dedicates itself to finding animals that the mainstream media denies even exist. (Bloody media, ruining everything.) A subset of cryptozoology is the search for living dinosaurs or relatives of dinosaurs, which some believe are alive in vast, unexplored parts of Africa.

This year, The Institute For Creation Research published a paper by a researcher who had visited the Congo on several occasions to track down a living dinosaur. The dinosaur in question is named the Mokele-mbembe. Ol' Moke is elephant-sized, kills all humans it comes into contact with, and eats only vegetables. (It also chucks humans out of canoes and leaves them to rot, if you wondered.) It lives in swamps. It has a "cold reptilian stare." It's alive, even though, you know, it's a dinosaur.

Here's a podcast on living dinosaurs by How Stuff Works' series Things They Don't Want You To Know.

Our favorite line, and quite possibly the greatest line of all time: "In the face of these persistent and consistent reports, the absence of any evidence or explanation is, itself, bizarre — unless, that is, there's something they don't want you to know."

Because Obama should be on a podium in the Rose Garden, loudly shouting: "There ARE NO dinosaurs in Africa"?

2. The Shutdown Was A Trap To Demonize Republicans

So what did President Obama do with all that time the government could've spent tracking down dinosaurs? Well, he plotted an elaborate scheme to vilify the Republican Party in the hearts and minds of the American people, obviously. The GOP shut down the U.S. government through no fault of their own, according to a slew of right-wing media outlets including the Washington Times, WND, and Front Page Mag.

The scheme had been masterminded by Obama's senior advisor Valerie Jarrett, who desperately wanted the House of Representatives back in Democratic hands, according to right-wing author Ed Klein.

Klein told the New York Post that Jarrett had "convinced the President that a government shutdown and default offered a great opportunity to demonize the Republicans and help the Democrats win back a majority in the House of Representatives in 2014."

A Texas state representative backed up the story. Way before the shutdown, noted Rep. Louie Gohmert (R-TX,) the federal government had already prepared to shut down parks and landmarks ... by providing traffic cones.

"They already had barricades, cones, from New York to California, Utah, Arizona, South Dakota," said Gohmert on Fox News. "They had worked out in advance that they were closing these things down."

3. World Leaders Are All Reptiles

Remember when we talked about all that distrust for the government running rampant at the mo? That's bad news for the White House, but great news for ex-BBC reporter David Icke: Icke's spent most of 2013 touring the globe, explaining in popular lectures that most of the world's elite — Oscar winners; country singers; left-wingers — are actually descendants of an extraterrestrial reptilian species.

Icke's spent years publishing books about a high-level conspiracy he calls the "Babylonian Brotherhood." The guy has a massive, dedicated fan base: his magnus opus, The Biggest Secret, has been reprinted six times. His books have been translated into eight languages, his website gets thousands of hits a week, and his lectures attract devoted fans around around the globe. So what does Icke know that we don't?

Basically, a few thousand years ago, a reptilian race called Draco landed on Earth — the Middle East, specifically — in search of minerals. The reptiles decided that since they were on the planet, they might as well control it. But wait, you say: they're reptiles!

Yes, but only secretly. Luckily, Draco and their descendants can shape-shift into humans and walk on two legs, so they're good. All "reptilian humanoids" know of one another's identity and control the world by mutually supporting one another's #winning. They cast out anybody who isn't a reptile. They control every major organization in the world, from the CIA to the World Wide Web. They are also mostly male, which explains a lot.