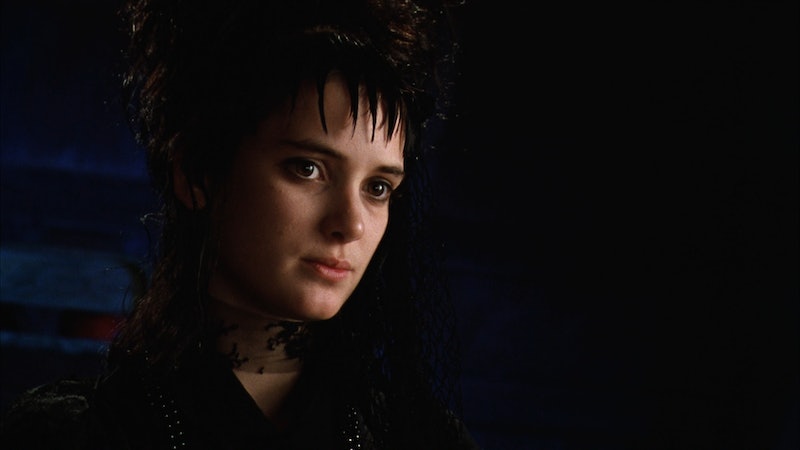 Hold onto your hats, ghouls and boys, because Beetlejuice is coming back. In an interview on Late Night With Seth Meyers, Winona Ryder confirmed that Beetlejuice 2 is happening! Unpopular opinion: I'm not really sure how I feel about a Beetlejuice sequel, because I don't like tampering with perfection. But I am intrigued about seeing goth icon Lydia Deetz again. While I forever worship at the altar of Winona and all her characters, there's truly something special about Lydia.

Here's the thing: Before Christina Ricci reinvented Wednesday Addams in the early-'90s Addams Family films, Lydia Deetz was the only prominent pop culture figure giving goth girl realness. And while Wednesday favored a deadpan, passively evil vibe, Lydia delivered something different to anguished teens. Her melancholy was melodramatic, don't kid yourself. But even when overwrought, she seemed shrouded in casual gothy coolness. Her subdued intelligence and dramatic stylings were enough to make any slightly strange and unusual girl want to be her a little. Or, if you're me, want to be her a lot.

More Beetlejuice? We'll see how the sequel develops. But more Lydia? Yes, please. Because Lydia Deetz still reigns in the heart of misfits, and it's for the following reasons that she's still a hugely important character today.

1. Before Lydia, Markedly Alternative Teens Were Hardly Seen At The Forefront Of A Movie

Typically in pop culture, being "different" or "unpopular" in high school meant that instead of being thin, blonde, and conventionally attractive, you were thin, brunette, and conventionally attractive. Maybe you could be a redhead, but only if you were Molly Ringwald — and you could only emulate New Wave kookiness, which basically looked like most horrendous '80s fashion anyway. Maybe you could be part of a Breakfast Club, but only if you got a makeover that washed off all your eyeliner at the end.

Enter Lydia, with her stark black hair, parchment-pale skin, perpetual bags under her eyes, and array of statement hats. Within the tone of the film, she doesn't feel like an anomaly, but her mere presence as one of the main protagonists is huge — and not only for members of the goth subculture, which is used very rarely in film (and when it is, usually for sight jokes). Seeing someone who challenges the bullshit idea of "movie different" is refreshing. It paved the way for '90s angst-ridden characters like Angela Chase and Daria Morgendorffer to helm their own shows.

2. Though Her Fashion Sense Is Unconventional, It's Also, Well, Fashionable

Minimalist when it comes to color, of course, but very, very high fashion when it comes to everything above the neck. Those bangs? That ponytail? The very fact that she wears a lace mourning veil to dinner? Lydia's style is right out of a Harper's Bazaar photoshoot, and that makes her far more coordinated than I was at that age — all black lipstick and Tripp pants.

3. She Has Such A Way With Words

Lydia has an understated wit that you only get to see in glimpses throughout the film, usually when she's insulting her stepmother. "She's sleeping with Prince Valium tonight," she says as a passed-out Delia fails to react to Barbara and Adam's scare tactics. Bless. Most goth teens (i.e. me) just thew a temper tantrum about not getting a ride to the Marilyn Manson concert.

4. She Has A Hobby That Gives Her Extra Insight Into The World Around Her

The Deetz family has a persuasion for the creative arts. Hell, Delia seems so wrapped up in her abilities that she decides to turn the house into an avant-garde art project. But Lydia is so immersed in her photography that her father suggests they set up a dark room (prompting Lydia to claim that her whole life is a dark room). It's her one extracurricular activity throughout the film, and it's what helps her discover that, hey, she's living with ghosts. I've always found it interesting that while Delia's pretensions sway her to have a deluded perspective about her "talent," Lydia uses her artistic inclinations to see truth.

If we're being honest, Lydia kind of messes up throughout the course of the film. She's the one who, in a panic, sets Beetlejuice free. Instead of becoming the savior, she becomes the damsel in distress. And you know what? That's kind of OK! I'm glad that they show that at the end of the day, Lydia is a mess of teenage hormones. What's important is that she tries.

6. She Knows How To Have Fun And Let Loose

When the mood strikes! And mostly when spirits are involved to give her an extra boost! It quite literally elevates her from just being a hackneyed beacon of doom and gloom.

7. And Finally, Because She Learns How To Negotiate Being Strange And Unusual With Being ... Happy

It's hard to tell when she has her uniform on, but if the animated series is any indication, Lydia probably didn't become a cheerleader after her encounter with the Netherworld's finest. However, by the end of the film, it's clear that her friendship with Barbara and Adam has brightened her mood and her mind, and she's now decidedly more comfortable in her skin. And that's something that every real-life Lydia aspires to be.

More like this
Then Vs. Now Photos Of The 'Enchanted' Cast In 2007 & The Sequel's Stars In 2022
By Marina Watts
See 'Twilight' Stars Together Again For A Sweet Cullen "Family Reunion"
By Stephanie Topacio Long
'The Princess Diaries 3' May Go Ahead Without Anne Hathaway
By Darshita Goyal
The Indigo Girls Taught Me Queer Relationships Could Be Messy, Too
By Hannah Soyer
Get Even More From Bustle — Sign Up For The Newsletter