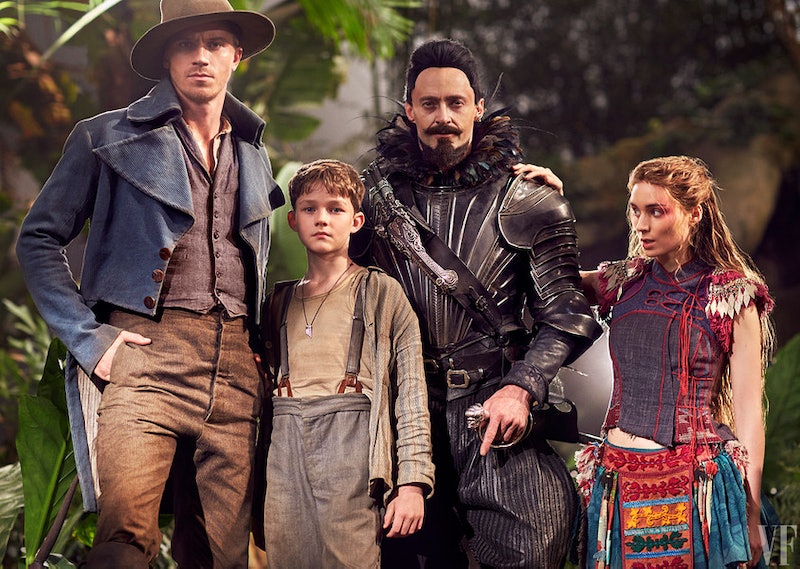 In every Peter Pan iteration I can recall, James Hook, aka the man with one hooked, metal hand and a terrible fear of crocodiles, has been pint-sized Pan's sworn enemy in Neverland. But in 2015's Joe Wright imagining, Pan , James Hook doesn't yet have a hook for a hand, he hasn't set foot on a pirate ship, and he's — if you can believe it — Peter Pan's biggest ally. As Joe Wright says, "He's Hook before the hook."

On the Road's Garrett Hedlund tackles the newly imagined role, transforming a greedy, grizzled Hook into a handsome, Indiana Jones type. "There's something beautifully old fashioned about Garrett that I really love," Wright says. "I was brought up with those Spielberg films and films of the '80s which refer back to heroes of cartoon strips of the 1950s."

With his off-kilter hat, old-fashioned accent, and boyish grin, the actor certainly manages to make Hook likable. "The idea of Neverland is that it's all from the imagination of a 12-year-old boy growing up in London in 1941, and all of these aspects are pulled together into this extraordinary place," Wright says. "Garrett felt like a character who a 12-year-old kid might imagine."

So without Captain Hook as Pan's biggest adversary, who would step into the role as Neverland's biggest baddie? According to Wright, Hugh Jackman has always wanted to play a pirate. And as Blackbeard, the true villain of Pan, he got the chance. "He said that he'd been wanting to play a pirate for a long time, which is a weird life ambition. 'Agent, get me a pirate,'" Wright jokes. "It's a grand performance but there's hopefully layers of subtlety beneath. Hugh, as you know, has a great history of working in the theater, and that was something I was particularly drawn to when thinking about this role. He plays him very, very dark, but there's always a slight wink to the audience, an inclusiveness. He nailed it."

Levi Miller, the young teenage picked out of thousands to plan Pan, admits to being intimidated by Jackman on set. "The character that he played was quite scary. The character alone, that scared me," Miller says.

"He's the nicest man on the planet," Wright assures. "The first couple days of rehearsal, Levi refused to call him anything other than Hugh Jackman. 'Hello, Hugh Jackson. Good morning, Hugh Jackman.' It took a little while for him to be able to relax and just call him Hugh."

But for the young boy from Australia, who had never stepped foot in America before landing the role, the chance to play an icon like Peter Pan was immense. "It was quite a long process for me. I did two auditions, I did a first one and then I got a call back. Then they flew me to LA and that was the first time I'd ever been in the United States, so that was awesome," Miller says. "Joe gave me a little bit of time to get the accent down, because the Australian accent isn't the Cockney accent. I did the chemistry test with Nibs [Lewis MacDougall]. During the day we went to Hyde Park and went on the row boats, where you pedal with your feet. I have photos from that, and we look so much younger!"

Wright and his team searched every English speaking country in the world for their perfect Peter Pan. "We scrolled through thousands and thousands of these audition tapes that were sent in," he says. "At the time it felt like very hard work, then suddenly one day [Levi's] face pops up and I went, 'Oh there he is!' it was very simple really. Levi was very clear, and open, and enormously talented, and that was it. After all of that work, it was actually really simple."