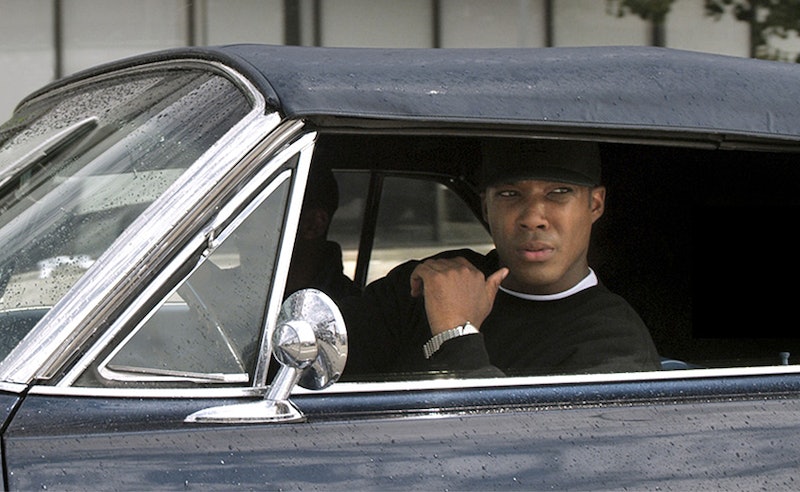 The new biopic Straight Outta Compton covers the rise and fall of influential rap group N.W.A., who encountered loads of success and and even more controversy in the late '80s. Out of the group's five members, two of them, MC Ren and DJ Yella, have faded into relative obscurity; one, Eazy-E, has passed away; and another, Ice Cube, has moved onto a successful acting career. But the remaining member is one of the hugest names in today's rap (and headphone) game: Dr. Dre. Clearly, whoever portrays this guy in Straight Outta Compton has a lot to live up to. So, who plays Dr. Dre in Straight Outta Compton ?

In the film, Dre is played by Corey Hawkins. Hawkins is only 26, and Straight Outta Compton is just his third studio film, but he's definitely poised to become the breakout star of the film. After all, he managed to hold his own in a pretty pressure-filled role; Dr. Dre, as you might know, has been active in producing hip hop for the last two decades, fostering the careers of artists like Eminem, 50 Cent, and Kendrick Lamar. Plus, his sale of his Beats headphone line to Apple last year made him the richest man in hip hop, rising his valuation to over $700 million. Just this week, he released his first album in 16 years just this week to coincide with the release of the film.

Hawkins had big shoes to fill, but as the movie shows, he's a naturally gifted actor with incredible range. Here's the evidence proving why this guy is about to blow up.

Hawkins attended the prestigious Julliard School in New York, where he received the John Houseman Award for classical theatre.

He's Faced The Lights Of Broadway

Directly before landing his role in Straight Outta Compton, Hawkins appeared alongside Orlando Bloom in Romeo and Juliet on Broadway.

Any actor worth his salt these days has to make a turn in Marvel's Cinematic Universe it seems, and Hawkins made his major studio film debut in Iron Man 3 .

Hawkins appeared alongside Neeson in the airplane thriller Non Stop , and managed to come out of the experience with no broken bones.

He's Set To Take On Zombies

Now that he's conquered Broadway and movies, Hawkins is moving onto one of the biggest TV shows in the world. He'll be playing Heath in the next season of The Walking Dead .

He's Busting Out The Popcorn

Hawkins will be returning to the silver screen in 2017 for Kong: Skull Island, the King Kong prequel that is sure to be a massive blockbuster.

If there's one thing Oscar adores, it's guys playing musicians. Will Hawkins get any love from the Academy for his portrayal of Dr. Dre in Straight Outta Compton? We'll know come awards season. In any event, though, Hawkins' performance will surely make him one of the most talked-about actors this year.