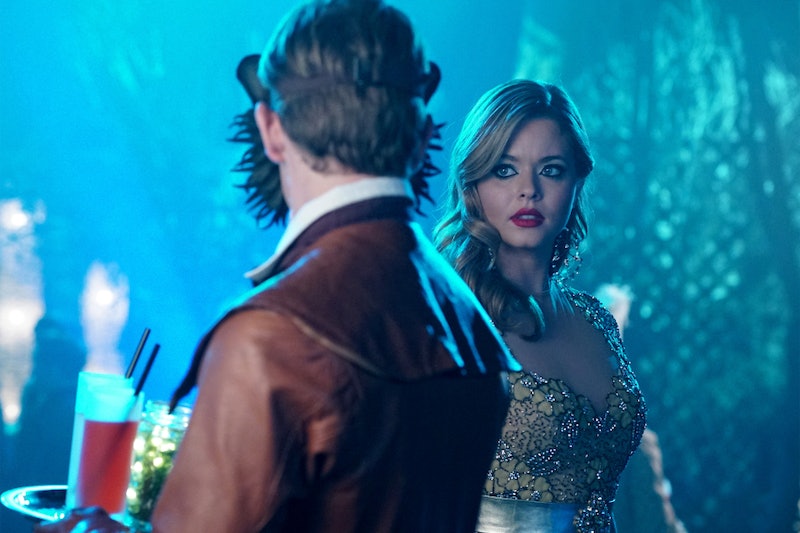 It's not Pretty Little Liars if there's not some huge mystery thrown at us in the final minutes. During the end of summer finale, it was revealed that after the time jump, someone was chasing Ali. But, just who is the "he" coming for Ali on Pretty Little Liars? No name was used to describe the mysterious stalker, but all the girls seemed very afraid of him. Let's be real, just about every male figure on this show has been creepy at some point, so it could really be anyone.

Add to that the fact that this mysterious person is following Ali after the time jump, which means it could be someone from their future that fans haven't even met yet. But, because I am never happy just leaving it at "I don't know," let's get to speculating.

Not gonna lie, Ezra looked sketchy as hell in the 6B promo, and considering whoever was coming after Ali was coming after her as she is preparing to teach, I can't help but put two and two together. What sometimes-sketchy teacher do we know from Rosewood? Ezra. Who knows why he could be after Ali, but I feel like it was a clue that teacher Ali was being threatened at school. It makes me immediately think of Ezra. He may not have been A, but he's always seemed a little sketchy, right?

If it's not Ezra, though, it could be Lorenzo. We clearly see Ali has a new last name of Rollins. Maybe Lorenzo is a scorned boyfriend who is mad that Ali has a new guy. It could even be Wren. He has always been shady, this could be his time to shine and come after Ali.

Honestly, it could be anyone. And, I guess that's the point of the teaser: To give us something to think about during the hiatus. So, for more Ali's new stalker theories, and everything Rosewood, check out Bustle's latest PLL podcast below:

More like this
Shonda Rhimes' Net Worth Makes Her One Of The Wealthiest People In TV History
By Hugh McIntyre
The Best 'Grey's Anatomy' Intern Moments, From MAGIC to Glasses
By Grace Wehniainen
Kidnapping Victim Jan Broberg Is Prepared For A Friend Of The Family Criticism
By Brad Witter
'The White Lotus' Season 2 Trailer Teases Multiple Affairs & Another Dead Body
By Bustle Editors
Get Even More From Bustle — Sign Up For The Newsletter