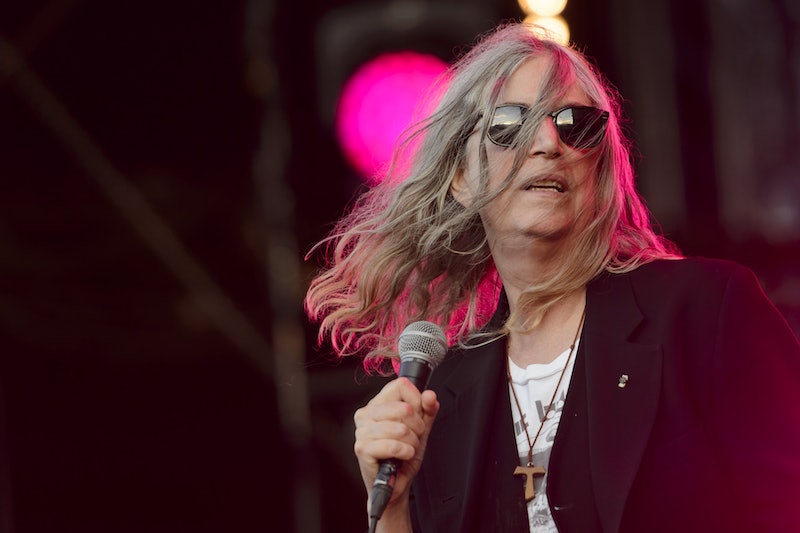 Not only is she releasing her second memoir M Train this fall, but Patti Smith's memoir Just Kids will be adapted into a limited TV series on Showtime. Even better is rock legend Smith herself is teaming up with Penny Dreadful creator John Logan to co-produce and co-write the series. Just Kids won the National Book Award for Nonfiction after its publication in 2010, and it was (understandably) a "very coveted property," sparking major competition its adaptation rights. Why? Because it's going to make such an incredible limited series and it's basically already pre-programmed into my DVR.

David Nevins, the president of Showtime networks, which also airs Penny Dreadful, spoke about his excitement for the Just Kids TV series.

Just Kids is one of my favorite memoirs of all time. Not only is it a fascinating portrait of artists coming of age, but it’s also an inspiring story of friendship, love and endurance. I’m so thrilled that Patti Smith will bring her unique voice to writing the scripts along with the gifted John Logan, who has been doing such a phenomenal job with Penny Dreadful for us.

In a statement Smith echoed Nevins' sentiment, showing that (thank goodness) the spirit of her memoir will definitely be alive and well in the Just Kids adaptation.

A limited series on Showtime will allow us to explore the characters more deeply, enabling us to develop stories beyond the book and allow a measure of unorthodox presentation.The medium of a television limited series offers narrative freedom and a chance to expand upon the themes of the book.

Smith and Logan stated that they have been working on a screenplay for Smith's first memoir since 2011, after Smith was inspired by Logan's Tony Award-winning Red on stage. Nevins also stated that Smith is a big Penny Dreadful fan.

Just Kids centers on Smith's friendship-romance with photographer Robert Mapplethorpe in the heyday of the punk rock movement in New York City. He famously shot the black-and-white album cover of Smith's Horses. Mapplethrope died from AIDs-related causes in 1989, when he was only 42.

Now the only lingering question (other than "can I watch this immediately?") is who should play the young Godmother of Punk?

I have got to put in a bid for Hailee Steinfeld, who we know has some True Grit, like Smith herself.