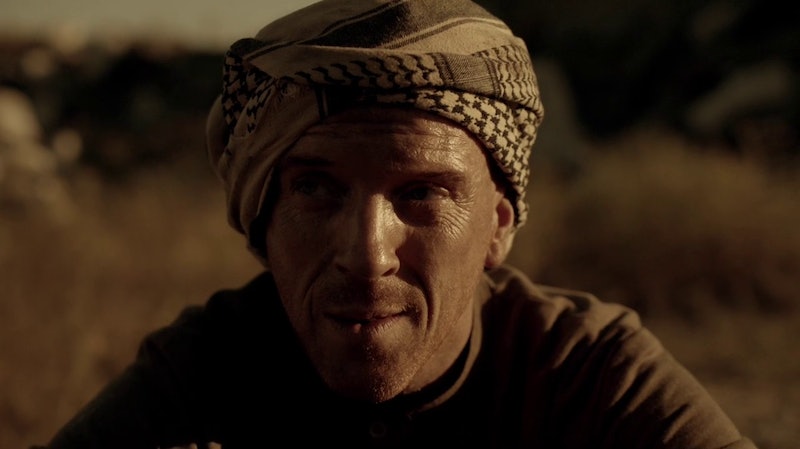 Are the viewers of Homeland ready to exist in a world where we see Nicholas Brody, redeemed? That certainly seems to be the case leading into next week’s hotly anticipated finale episode. Brody was all but deified during "Big Man in Tehran," thanks to his risky daredevil move to get close to Akbari and kill him (always be wary of a crystal ashtray, you guys). There were twists, there were turns (as any good episode is wont to do), but now I’m totally conflicted: are we supposed to be rooting for Brody to live now?

It’s really a brilliant counterstrike to the haterade hullabaloo surrounding Brody since the end of season one. Everyone wanted him dead — everyone. (Me especially.) But now Homeland’s gone and done the unthinkable: made Brody stand up and do the right thing, leaving his fate in Carrie’s hands. And if — and it’s a big if — Carrie gets Brody out alive, are we really ready for a world in which America’s gingeriest terrorist we love to hate is met with compassion? Homeland has gone back to its character-driven, makes-you-think roots and for that we’re eternally grateful, but we’re conflicted on the pros and cons here.

Brody’s towed a long road towards this penultimate redemption song. Landing squarely on the back of Carrie’s emotional wherewithal, Brody lives and dies on her perception of him and his actions. A perception that often feels far too biased (baby-daddy issues and the like) at times to truly see the real man underneath the battered victim complex. He was not the Langley bomber — of that much we are certain — but he is a lot of other terrible things. And looking back on the season as it stands thus far, it’s easy to see how the writers and producers have been setting up this emotional bait-and-switch from the onset. Javadi was never the play, Carrie’s hospitalization was never the point: it was always about getting Brody to this place, this moment, this potential cliff.

We were dangled above the hellmouth that is seeing Brody as a maybe not-all-bad guy this whole time; it just took a lot of set-up to get there. We needed Javadi, Fara, Carrie, and Saul to be cornered, metaphorically and literally. And in doing so, force the audience to empathize with their decisions, understand the amplified stakes for everyone involved, and then turn around and force us to root for Brody. It was the only way to get the audience on his side — which really is sort of brilliant when you think about it. Now we’re all sitting here, Brody’s mission completed, but a bleak outlook for his foreseeable future. So that all of the hard work and sacrifices these players have made thus far.

And it’s the most selfless thing Brody’s probably ever done. One could easily say that Brody’s viewed himself as a victim of the world for quite some time, taking little-to-no responsibility for his own actions and beliefs. He’s selfish and that makes him weak. But now that he’s risen from the proverbial ashes, Brody’s finally ready to put something ahead of its own wants and wishes: the mission. And it does, at least superficially, show a sea change. He’s too reckless to be a real hero — and has left an extensive body trail in his wake — but he’s certainly done something heroic. Most storybooks will lead you to believe that all heroes must live.

But is Brody’s one good deed enough to curry our favor and a want for him to live? It’s hard to see that working out, at least in the name of interesting storytelling. Brody’s success in the mission brings him full circle, but his death would spell an even bigger hurdle for Carrie. With Brody alive, there are a lot of questions and suspicions that would need to be answered and reconciled. With Brody dead — particularly if at the hand of Saul, who moments prior to Akbari’s death, was alerted to the mission’s potential for epic failure by Javadi himself — Carrie can no longer teeter on the edge of life and death in the name of her job. She’d have to take a good, long look at herself and whom she works for (much as Peter Quinn has done throughout the season), likely to cause an existential and/or identity crisis for our little CIA agent that could. Certainly a sacrifice worth redeeming Brody over.